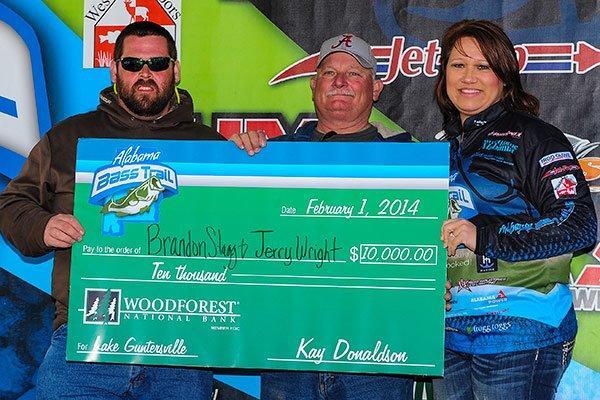 Anglers often dream, about buying boatloads of tackle and electronics or maybe even a new boat if they win a tournament with a big payout.

For the team of Brandon Staggs and Jerry Wright they had a different dream for putting their winnings to good use if they ever won a â€œhigh-dollarâ€ tournament.   After Wade died, Brandon and I talked it over and decided if we ever won one of those big tournaments, we were going to buy Wade a headstone.   Wade didn’t have a headstone on his grave and we wanted him to have one, a really nice one,â€ Wright said.   â€œWade was a really, really close friend to me and Brandon.â€

Wade Caperton, of Leoma, Tenn., who died in 2011 was an avid angler who competed in tournaments with both Staggs and Wright.   Staggs, of Summertown, Tenn., and Wright of Waterloo, Ala., wanted to memorialize their fishing buddy with a one-of-a-kind tombstone.   Staggs credits Caperton with teaching him how to bass fish.   Wright calls Caperton the kind of man everyone should strive to become.

â€œHe was an exceptional person,â€ Wright said.   Everyone liked Wade.   He was an honest, hard-working guy who loved the outdoors.â€   â€œHe was a great guy,â€ Staggs said.

When Staggs and Wright won the inaugural Alabama Bass Tail Tournament Series event on Lake Guntersville on February 1st, they used the $10,000 they earned to buy a tombstone for Caperton.

â€œAs we were driving home from the tournament on Saturday, Brandon said â€˜you remember what we talked about’,â€ Wright said.   â€œI said yes and we’re going to do it. We went the next Monday morning and picked out a headstone for Wade.â€

Staggs said the black granite stone will have laser etchings that reflect Caperton’s love of fishing and the outdoors.

â€œIt has a fish coming out of the water on one side and a turkey on the other side with a stream coming down the middle.   It’s beautifulâ€ Wright said. â€œWade would like it.â€

Wright said other than telling a few of Caperton’s closest friends about the tombstone, he and Staggs had planned on keeping their purchase a secret.   One of Caperton’s friends alerted Alabama Bass Trail Director Kay Donaldson about Staggs and Wright’s good deed.

â€œWe didn’t do it for publicity. We did it for Wade,â€ Wright said.

When the tombstone is completed and is placed on Capterton’s   grave near Summertown, Staggs and Wright plan to meet at the cemetery to honor their fishing buddy and reflect on the many great days spent together on the water.

â€œWade was a great fisherman, but more importantly, he was a good man,â€ Wright said. â€œWe really miss him.â€

What Brandon and Jerry didn’t mention was originally they had only registered for one tournament, which didn’t guarantee their spot in the ABT.   I called to let them know that field was full and I would be refunding their money. Brandon asked if we had a team back out would I please call him and he would pay for the entire north division.   Over a month later a team called with a family tragedy and we had to fill the spot rather quickly.

I called on Brandon and Jerry and just as they promised they signed up for the entire North Division. Despite very little practice time and extremely cold temps, these guys went on to crush 32.02 pounds of bass. So when I heard their story and felt their love for Wade, I knew immediately there was a bigger plan and we were just the instruments.