Let’s look at what was maybe the most historic weekend in professional tournament bass fishing and how historic each of these events is as well as the overall professional bass fishing year in review, granted there are still a couple of Elite Series events, FLW Tour Invitationals, Angler of year for the Elite Series title and the Forrest Wood Cup champion still yet to be decided. 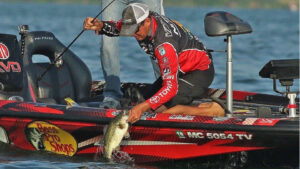 Kevin VanDam lays claim in most fans and competitors eyes as the greatest bass fishing angler of all time. His prowess with a crankbait is equally as impressive as his ability to trigger smallmouths into biting. It’s rare to be able to be so dominant with largemouth fishing as you are with smallmouth fishing.

More rare would be winning 22 major professional tournaments on the BASS tours, which VanDam did when he notched his second win of the 2016 Elite Series season on Cayuga Lake after winning on Toledo Bend in Texas/Louisiana earlier this year.

His closest rival, for those keeping score, was Roland Martin, with 19 wins in 300 events. Vandam has 22 wins in 288 events. VanDam has also been in the money 235 out of 288 times or roughly 82% of the tournaments he’s fished at BASS. Yep. He’s the best, statistically and beyond. 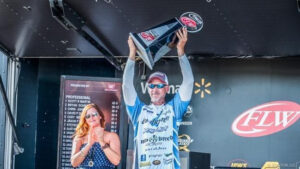 The Other GOAT goes 3 out of 4

Angler of the Year titles should actually be the most prestigious titles in fishing, although events like the Classic seem to get more fanfare. Maybe that’s because winning Angler of the Year is hard to give much fanfare to as it’s usually crowned while someone else is winning a regular season event, thus that other angler gets much of the fanfare. But Tennessee angler, Andy Morgan is largely consider the Greatest Of All Time (nicknamed the GOAT) in FLW fishing circles.

This weekend Morgan was crowned the 2016 Angler of the Year on the FLW Tour, his third such title in four years (he finished 9th in the standings last year and still earned $90,000 in winnings). While no one has ever won 3 out of 4 like that before, maybe equally impressive is that Morgan has never been outside the top 10 in AOY point standings since 2006. A decade of being a top 10 angler on his circuit. And by the way he has 20 something wins on the FLW side of the fence as well (records not kept before 1996). So he’s also statistically the best for more reasons than most know. 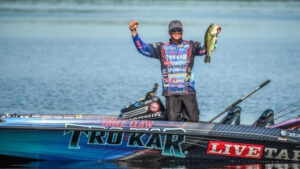 No angler had won three FLW Tour events on the same body of water and no one had won 6 total until Scott Martin notched his 3rd FLW Tour victory on Lake Champlain this weekend, and his 6th overall. He led the event wire to wire. The noted south-Florida, grass-loving, big largemouth bass guy, went about as far north as the tournaments go and caught smallmouth better than anyone else in the field â€¦ three times. Nevermind, he’s the son of legendary angler Roland Martin, Forrest Wood Cup champion and last year’s Angler of the Year (the only one of the last four Morgan didn’t win). He’s now FLW’s top FLW Tour winner with 6 wins and a bonus win in what used to be the FLW Series on his home waters of Okeechobee. Another legendary angler in his own right making history.

Lane One-Pounds them to Death

Major League Fishing jumped onto the professional bass fishing scene about 5 years ago. While it’s fields are small and made up of mostly Elite Series anglers with a few FLW Tour anglers sprinkled in there, the format is new and outside the norm of following a tournament for fans because they are filmed months in advance, kept a secret and then released over the course of a few weeks on television.

Bobby Lane won the 2016 Challenge Cup on the Harris Chain on television this weekend (although he actually won it last season, I believe). He talked about having to reprogram himself from his moniker of Bobby “Big Bass” Lane to catching as many 1 and 2-pound fish as he could as quickly as he could. He has caught the largest bass in MLF history on the show in a previous event, but said it didn’t matter because he ultimately got beat by guys catching 10 1-pounders in the same amount of time. He was getting “1-poundered to death” as he put it.

When the event concluded, he had a tournament to head to the following week and had to reprogram himself back from catching 1 pounders to catching better quality fish for his best five. That reprogramming in fishing can be hard to do. But it seems like some of the best have done it.

Of the 9 major events MLF has had, Lane won the last, Edwin Evers won twice, Kevin VanDam won twice, while Denny Brauer, Brent Ehrler, Scott Suggs, and Kelly Jordon have each won once. Those are some pretty big names in the competitive circles of pro bass fishing adapting to a new format. 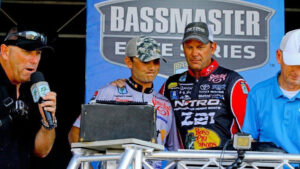 The old and the new

This season has also seen Edwin Evers win a Classic with an amazing 29 pound bag on the last day, while Rick Clunn, Takahiro Omori, Greg Hackney, Randall Tharp, and Scott Canterbury also all win as veterans in the pro tours. Meanwhile anglers with just a few years in like Buddy Gross, John Cox and Jason Lambert (who also set an FLW Tour weight record) also saw their first Tour level wins. And then you had the journeymen like Bradley Hallman and Britt Myers notching their first tour level wins after many years on tour as well.

Relatively new, battle-tested and legendary anglers alike won events across the tours. The GOATS from both tours set historical records and notched another mark in their belts, letting the young guns coming up in the sport know they still have what it takes to keep up with that young energy and enthusiasm.

Occasionally a wily veteran lets down his guard like Hackney did at Cayuga when he inadvertently fished a less than clearly marked off limits area in the last event to have his first round weight nullified, promptly knocking him out of the Angler of the Year race that he was leading by a large margin. Makes for great drama, but the fan in you cringes for a guy with the character and humility that Hackney always displays. The respect the anglers who get the top spot by default, like Gerald Swindle, show those who make a tragic misstep, that they admittedly could have easily done so themselves, is remarkable. 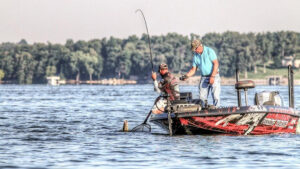 Educating the masses on fishing etiquette

That’s not to say these events have gone down without any on-the-water drama. And there are lessons to be learned from this season. The Tharp-Herren run-in at Norfork/Bull Shoals was well documented but turned out to be nothing more than a miscommunication, and they handled it like civilized men afterwards, talking it out with both being viewed more favorably for it.

Unfortunately, I’ve either witnessed myself or heard of several cases this season of guys having to fight off competitors with this new notion that it’s okay for anglers to come in on another angler, especially one doing well. leading or in contention during an event or a season to make a title run, because they know there are fish there.

For those still keeping score â€¦ Nope. It’s not okay. It’s never been okay. It never will be okay.

You knowing where fish are, does not give you the entitlement to come in and set down on top of an angler and start fishing where he’s fishing, tournament or otherwise. That’s the difference between good anglers and sheep. A good angler goes to the next place that doesn’t have a guy on it. You can have the spot as soon as the other guy leaves. That’s just simple common courtesy in fishing.

Not to mention you’re telling every other angler on the lake it’s okay for them to do that to you on any lake when you fish these big events. Adopting this new “3-lap Larry” fishing style, where you just drive around and see where people are fishing and then attempt to muscle in and see if you can compete should be discouraged at all levels. And I can tell you it is discouraged by competitors all the time on the water. And the pro anglers that see it happen aren’t fooled by what you think you are doing.

There is a growing contingent in the sport that are not standing for it, and you can be assured you’re going to have an unpleasant encounter with those guys that could cost you sponsors, sales and dollars down the road. Many of the anglers who have tried this in past, don’t last long and wash out or get run off.

I feel like these increased run-ins will eventually lead to a migration to these secret MLF-type events with smaller fields, no locals and a contraction of the top levels of the sport.

Sure anglers find the same fish and the same water in practice. And I’ve seen it work out too in those cases on the first morning of an event.

At the FLW Tour on Kentucky Lake, Terry Bolton and Bryan Thrift were sharing a spot the first day. Thrift was very cordial about fishing with Bolton the first day. Asked before he started fishing. Bolton obliged and shared the spot. That’s how it’s done. Ask, then the first guy can agree or not to let you in. But it’s amicable either way.

They shared it the first day and both were doing well in the event. The second day, Bolton had already had a great day (subsequently the day two leader). Thrift rolled in panicking with only 3 fish in the livewell, with an hour to go before weigh-in.

Bolton said, “Get in here, and cast right there.”

Thrift said, “Man I will just catch two, and I will leave it.”

Thrift caught two in quick order, pulled his trolling motor and began idling down from the school. Low and behold, he happened upon another school, went to smashing on them and culled out his entire limit to land another 20-pound bag that put him into the top 10. He found Bolton after the weigh-in and said, “I owe you Bolton. And I will repay that favor!”

Don’t be a sheep. By that I mean, don’t follow the GOATS or another angler into an area he found and try to piggy back after you see he has some success there. Strive to be the next GOAT. Put in your work, blaze your own trail, and treat your competitors with respect. Your peers, fans and sponsors see that stuff. When you win, it will mean more. And you will have an opportunity to put yourself in that class of history-making GOATS on both tours. And in turn you will educate millions of other anglers on how to be respectful of guys fishing a spot even if you know fish are there.