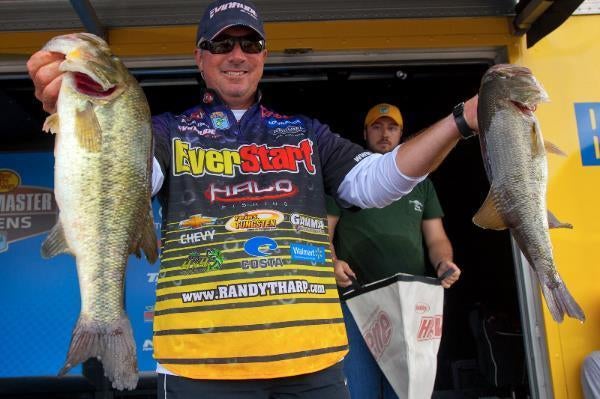 Touring pro Randall Tharp took a big step towards winning a points standings title and qualifying for a berth in the 2014 Bassmaster Classic by taking the lead in the Bass Pro Shops Bassmaster Central Open at Ross Barnett Reservoir.

The Gardendale, Ala., pro came into the final Central Open in the runner-up spot of the points standings and solidified his chances of winning the points title by catching a 16-pound limit on Day 1. Tharp is also hoping to win this event so he can qualify for the Bassmaster Classic to be held at Lake Guntersville in February.

â€œI cut my teeth on Guntersville, and it would mean a lot to me to fish that tournament,â€ he said.

Engine problems cut into his fishing time, but Tharp still managed to put together a good day. â€œI pulled up on my first place this morning and caught a good fish, and on my way to the second spot, my motor quit running. That is not what you want to happen when you are trying to win a points title,â€ said Tharp, who was unfazed by the breakdown.

â€œI do this all the time, and breaking down is part of it. Hopefully, I will get to fish all day  tomorrow  and maybe catch a 20-pound bag. I feel it is harder to get a bite the later it gets, and I spent a good portion of the morning getting my motor fixed when the fish were biting. It is definitely tougher for me to get a bite later in the day.â€

Fortunately for Tharp, the breakdown occurred close to an area he planned on fishing. By the time the service crew arrived, he had added three quality keepers to his livewell. Despite having his fishing time shortened, Tharp still caught three limits of bass throughout the day.

Claremore, Okla., angler Brian Potter refined a pattern every day in practice, and by  Tuesday, he estimated he got about 40 bites. â€œI just figured out what they wanted, and I am just going to stick with it,â€ said Potter, who moved into second place in the pro division with a 15-12 limit. â€œI hit a lot of spots today and caught one fish here and one fish there.â€

Bob Walton of Longview, Texas, took over the lead in the non-boater division thanks to the net job of his partner, Todd Murray, who scooped up Walton’s biggest fish of the day (5-7) before the hook popped loose. Walton got a chance to fish his strength on Day 1 and finished with a three-bass limit weighing 8-14. â€œI fished the way I wanted to, and it worked out,â€ he said.