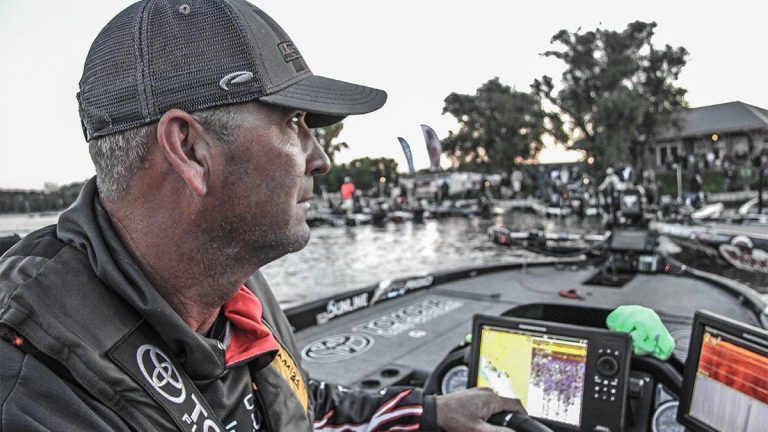 Cynical souls might grin over Gerald Swindle vaulting to the top of the Toyota Bassmaster Angler of the Year points race in the wake of former leader Greg Hackney’s disqualification late Thursday. But bass fishing’s funniest man wasn’t smiling one bit prior to day 2 launch at the Busch Beer Bassmaster Elite at Cayuga Lake.

“I don’t like getting ahead at the expense of somebody else’s misfortune,” said Swindle in a tone loaded with heartache. “Greg Hackney is one of the most honest guys out here, he got caught up in the moment, and got into an area of the lake where he shouldn’t have been apparently. But I’ll promise you it wasn’t on purpose. Anybody out here could make that same mistake, including me.”

Swindle and Hackney have been in a two-horse race for several weeks atop the Toyota Bassmaster Angler of the Year points list, but Hackney appeared to be in a “his to lose” position given the fact that events down the stretch at Cayuga, the Potomac River and the Mississippi River at La Crosse played perfectly to his love of fishing aquatic vegetation.

Now, everything changes. Everything but Swindle’s love and respect for Hackney as a friend.

“Make a list of 10 guys I feel closest to out here—pros that I respect and like the most—and Greg Hackney is on that list,” Swindle proudly stated.

Hackney and Swindle survived a tumultuous fishing trip to the Amazon Jungle years ago, share Quantum rods and reels as a longtime sponsor and love to talk whitetail deer hunting with one another.

“I feel like you could turn Hackney and I lose together in the Talladega National Forest for a month with nothing but our bow and arrows and a bucket of cookin’ grease, and we could survive together,” Swindle once stated.

Swindle says his new position in the catbird seat won’t change his approach on the water.

“Greg’s disqualification won’t change what I do one bit. I gotta take care of Gerald. My goal is to catch 19 pounds today, and I feel like I have to catch at least 17 pounds just to assure I get paid here. I’ll throw soft plastics—some weightless, some Texas-rigged—using a new 7-foot, 2-inch prototype rod I’m testing for Quantum and the new Smoke HD reel.”

Then, before the National Anthem played, and prior to Swindle’s boat number being called for takeoff came another somber heart-driven thought of his longtime friend.

“I just can’t imagine how Hackney’s feeling this morning.”