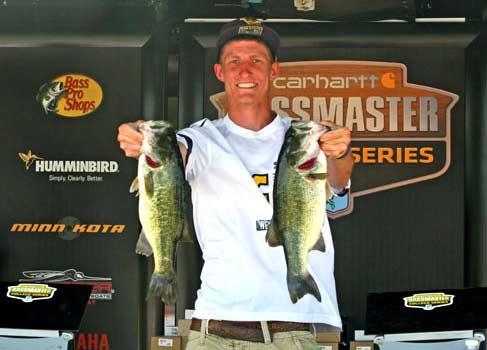 of a 16-hour drive from his hometown of Falling Waters, W.Va. He was in

of water. It was the Mississippi River, a complex fishery to understand

for an angler from the mountains of West Virginia.

and his chosen area dumbfounded anglers from the Midwest schools. The

bass on the move from backwater spawning areas. That was the game plan

Rude was all alone in his

out-of-towner. His obscure area was located up the Black River in a

small no-name bay. Its bare bank sloped at a 45-degree angle into a

25-foot channel. There was nothing fishy for its entire run of 300

But the name of the game

was the presence of baitfish. Rude saw them breaking the surface upon

entering the area during a blind, random stop there on the final

Being on a strange body

of water pointed Rude to a familiar choice in his tacklebox. With little

else to go on, he tied it on and went to work.

â€œA jerkbait is definitely a confidence lure for

me,â€ he said. â€œSo I threw it just for the confidence of knowing that if I

could get something going on it, then I would be fine.â€

The pattern came together quickly on the first

tournament day. A limit weighing 15-7 was swimming inside his livewell

within 45 minutes of arrival time.

â€œThere was just so much food in there, the fish didn’t have any choice

the short stay, Rude boated a largemouth weighing 4-5 that eventually

would tie for the Carhartt Big Bass Award. Following it to the boat were

two more fish of the same size. Striped bass were part of the surface

feeding frenzy that would erupt on occasion.

Certain the bass would

weigh-in, Rude held on to second place with a 4-ounce deficit behind the

15-11 weight of leaders Tessmer and Sybrant.

On the final day, Rude

arrived at the spot within minutes of the 5:30 a.m. takeoff time.

Another limit was on board by 6:15 a.m. The bait hadn’t diminished in

quantity, and the bass were showing themselves again during their

Rude stayed for the

remainder of the day to upgrade his catch. The effort paid off with a

15-10 catch that measured up as the biggest sack of the tournament.

The confidence lure was a No. 8 clown colored

Rapala X-Rap. He fished the jerkbait on 15-Seaguar InvizX that was

spooled to Quantum bait cast reels. He fished the combo on a variety of

His technique was as simple as the area itself. All he did was cast the rig into the mix of bass and bait for the hookups.

â€œIt just feels awesome to finally win one of these, because it’s been a goal of mine,â€ said Rude.

and Sybrant fished a backwater area featuring a mix of isolated

boulders and stumps scattered along the shoreline. The setup is common

in river pools 7 and 8 where the competition played out, with one

out crawfish in the livewell so we knew the area would be productive,â€

â€œThe bite was aggressive so that made it all the better for us,â€ added Sybrant, 24, an elementary education major.

Casting swimbaits at the boulders forming riprap and to the stumps was the team’s strategy. The presence of current was a key.

â€œThe fish were behind and

down current of the rocks and stumps,â€ said Sybrant. â€œThey were holding

4-5 largemouth caught on the final day. He caught the fish on a Berkley

Havoc Pit Boss. He rigged it to a 5/0 Gamakatsu EMG hook and ¼-ounce

sinker. He was flipping the rig on a grassy point when the strike

occurred at a depth of 4 feet.