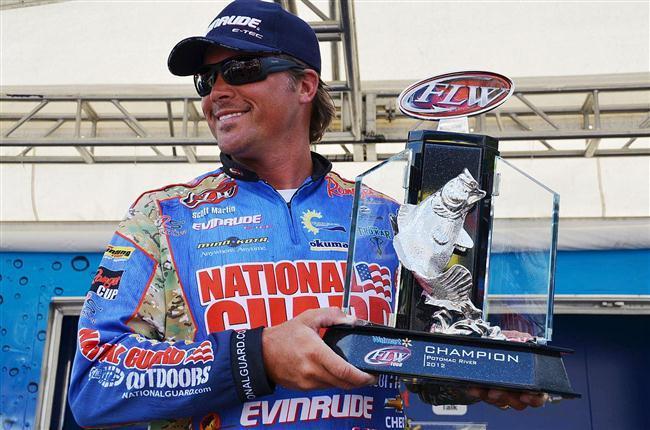 Before the FLW Tour on the Potomac River began this week, National Guard pro Scott Martin of Clewiston, Fla., dedicated his efforts to his wife, who has been a vital part of his support over the course of his career. Martin, the reigning Forrest Wood Cup champion, led the first three days of the event, and on Sunday, he got to dedicate a victory to her, as well. At the end of the day, Martin’s five bass worth 13 pounds, 7 ounces gave him a total four-day weight of 66 pounds, 6 ounces â€“ just 3 ounces heavier than second place â€“ as well as a championship trophy and $126,000. The win boosted Martin’s career winnings past the $2 million mark.

â€œEvery win is just so special, but this one here is unbelievable,â€ said Martin, who now has five Tour-level victories. â€œI dedicated it to my wife earlier in the week before practice started and was able to pull it off. Usually when you say you’re going to do something like that you kind of jinx yourself, so this is one of the most proud (wins) I’ve ever had.â€

Although he led the entire tournament, Martin’s lead shrank more and more each day. On Sunday Martin admitted he didn’t think he was going to win the tournament.

â€œI pretty much said I wasn’t going to win,â€ Martin said. â€œI thought somebody was going to bring in a 17- or 18-pound bag and edge me out. But God is good.

â€œWhen I got in and saw some of the weights starting to hit the scale I thought, â€˜Man, I might have a shot at this thing.’â€

Martin said he fished excruciatingly slowly and picked apart grass beds with a Bruiser Baits paddle tail worm. He said he wouldn’t catch a fish for 20 minutes and then he would catch one that would allow him to replace his smallest fish in his limit and increase his weight by 4 or 5 ounces. Then he would repeat the process.

â€œYou feel like a caged animal,â€ Martin said. â€œBecause you’re sitting in this one little spot flipping into every little hole you can.

â€œI just stayed confident out there,â€ Martin said. â€œ(David) Dudley kind of touched on it a little bit. It’s not the lures you throw. A lot of times it’s not even the exact spot you’re fishing. It’s confidence that wins tournaments, and I had a lot of it this week. It really paid off bigtime. The winning lure really was confidence.â€