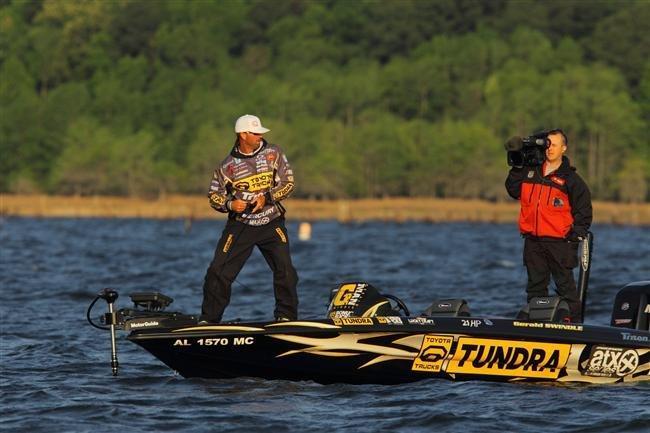 As they met backstage, Dean

Rojas and Gerald Swindle shook hands, then gave each other a man hug.

Both smiled graciously, both teared up a little.

It was hard to tell who had just beat who, but it was Rojas who had

bested Swindle by 1 ounce in the TroKar Battle on the Bayou. Rojas

It was his fourth Bassmaster career win, one

of which, like Sunday’s win, was on Toledo Bend Reservoir.

Rojas collected a $100,000 check and an automatic entry into the

2012 Bassmaster Classic. He also jumped 23 spots in the all-important

â€œI’m going to the Classic; this is so huge,â€ he said. â€œEverything

about the win I love â€” the trophy, the check, the points, the Classic,

At the same time, Rojas said, he felt for Swindle, who was philosophical and gracious.
â€œI wasn’t out to beat Dean, I was out to compete against Toledo

Bend and fish to the best of my ability,â€ said Swindle, who already

yourself up, get too bent out of shape.

jumped off during this tournament,â€ he added. â€œYou have to say, â€˜It was

into this and I didn’t make any stupid mistakes.â€

Rojas led for three days, putting together a margin of almost 4

pounds against David Walker going into the final day. But in the end, it

was Swindle who challenged Rojas, charging from third place with

Walker finished third with 70-2, Chris Lane was fourth with 67-3, and Fred Roumbanis was fifth with 67-1.
Rojas had a routine he followed throughout the tournament, and a two-pattern plan that produced all his fish over four days.
â€œAll week, I kept it simple: sight fishing and topwater,â€ Rojas

said, with his topwater bite producing his larger fish by working one

line, slowly on the edges of grass.

Rojas said his final day started slowly, as every day of the

tournament had. He caught one keeper on the popper, and then a 5-pounder

about 45 minutes into the day. But after the 5-pounder, he didn’t boat

another fish in the area, so he left and went to

sight fish. I filled out my limit with my sight fish, and then went back

to that area. I thought, â€˜Well, there was one big one there, there’s

He stayed for a few more hours, and culled once to gain a pound of weight.
â€œThank God I culled, or I would have lost today,â€ Rojas said â€” but

Rojas said he caught all of his sight fish on a WarMouth, a plastic

bait he designed for Big Bite Baits. He rigged the bluegill imitator on

them to bite. I don’t think there’s a finer sight-fishing bait on the

market right now, nothing to compete with it.â€

Rojas, known for frogging, said he tried a frog bait in practice,

â€œShad were spawning in the grass, and fish were blowing up on the

shad in the pockets, and I was working the bait through there, and

While Rojas moved up in the points standings, Alton Jones kept his

The Berkley Big Bass of the Tournament award and $500 bonus went to Ish Monroe for his Day Two 10-15.
Next