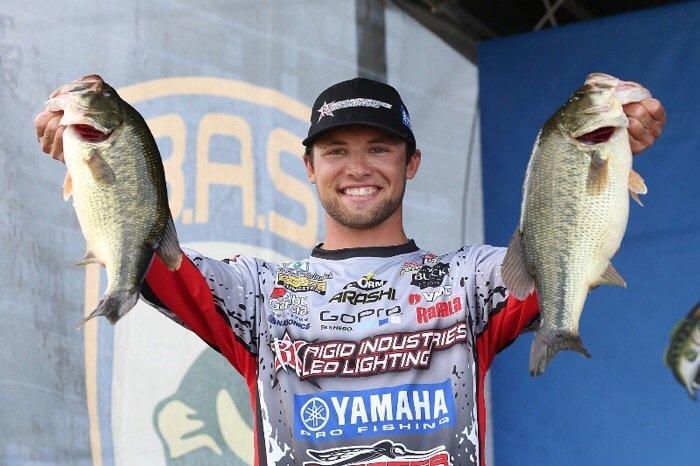 August is Brandon Palaniuk’s charmed time of year. New York is his state of magic.

Last August, the pro angler from Rathdrum, Idaho, won a Bassmaster Elite Series event on the St. Lawrence River in upstate New York. At age 25, he pocketed the $100,000 prize and achieved his goal qualifying for the 2014 GEICO Bassmaster Classic presented by Diet Mountain Dew and GroPro.

Thursday, just as focused on ensuring he’ll get into the 2015 Classic, Palaniuk led the 106-angler Elite field in the A.R.E. Truck Caps Bassmaster Elite at Cayuga Lake out of Union Springs, N.Y., where, once gain, the first prize is $100,000 and an automatic qualification for the Super Bowl of Bass Fishing.

Palaniuk brought in 20 pounds, 10 ounces, enough to stay 3 ounces ahead of the pack in the first of four rounds.

â€œIt was a magical day,â€ Palaniuk said. â€œI caught fish pretty early. I think I had a limit within the first 45 minutes, and slowly culled up from there. Every move I made, I seemed to catch a good one.â€

The 26-year-old does not have one challenger behind him in second place, but two. In a tournament peppered with ties throughout the leaderboard, Mark Davis of Mount Ida, Ark., and Mike Kernan of Wylie, Texas, were neck-and-neck at 20-7 for second place.

Greg Hackney of Gonzales, La., claimed fourth place by himself at 20-5. It was more than good enough to help him in the Toyota Bassmaster Angler of the Year points race, and an important move in keeping the lead he took over from Davis about two weeks ago.

Fifth place was yet another tie at 20-4. The co-owners of the spot were Jacob Powroznik, the pro from Port Haywood, Va., who won the fourth event of the 2014 Elite season; and Casey Scanlon of Lenexa, Kan.

Less than 2 pounds separated 12th place from first. There were 18 two-way ties and two three-way ties.

The standings weren’t the only things that were tight in the tournament. Many of the pros were bunched up Thursday on the most productive areas of Cayuga Lake, sometimes fishing within casting distance from one another.

Palaniuk said he has something going on his own. And he wasn’t in the least forthcoming about how he was catching bass.

â€œI’m keeping that locked down for now, â€œsaid Palaniuk, who said he had never before fished Cayuga Lake. Palaniuk said he learned from his Monday-Wednesday practice sessions.

â€œI had a couple patterns going (in practice) and those all came together for me to make for a really good day,â€ he said.

Davis attributed his good day to staying focused and keeping it simple.

â€œI went to a group of fish I felt were the best quality fish I found in practice, and they were hard to catch, but I had a limit by 8:30,â€ he said. â€œI feel good about going forward, even though another one of the leaders and I are sharing fish.â€

â€œYou can be right dead-on them at the wrong time and you will not get a bite,â€ he said.

Kernan built his 20-7 on top of a 6 pound, 2 ounce largemouth he boated early.

â€œI was fishing in the crowd this morning, throwing something a little different. I went there for keepers, mainly, because I wanted to flip the rest of the day (for larger bass). The second fish was that 6-2. I ended up catching four keepers there.â€

Kernan did turn to his flipping plan. He was able to replace three of those early keepers with heavier bass. In the afternoon, heading to the check-in point with a solid limit, he noted he was a few minutes early, so he put down his trolling motor for one more go at the bass. In three casts, he landed a 3-pounder, and he was able to cull up again.

Besides a win, the goal of all pros at Cayuga is to earn enough points to be one of 50 who qualify for the $900,000 Toyota Bassmaster Angler of the Year Championship, Sept. 18-21 on Bays de Noc out of Escanaba, Mich. That’s where they’ll have a chance at securing a Bassmaster Classic berth if they didn’t earn one by winning an event.

Palaniuk came to Cayuga ranked 33rd in points. His goal was at least a Top 50, he said.

â€œI really wanted to make the Classic on points. But now maybe I can go for another trophy,â€ he said.

Davis’ stellar Day 1 put the brakes on his downhill slide in the AOY points standings. Davis had led the AOY race for five consecutive events until the Delaware River event ended on Aug. 10, when he fell to seventh place. After Thursday catching more than 20 pounds, he was in third place in points.

â€œI let Angler of the Year get by me in those last two events, so whatever I do here will be nice,â€ Davis said. â€œIt’s hard to play catch-up.â€

Although points are posted after each day’s competition, AOY standings are not official until the end of the tournament.

Powroznik brought the largest bass of the day to the scales. A 6-6, the largemouth put him in the lead for Cayuga’s Carhartt Big Bass bonus of up to $1,500. Palaniuk set the bar for the event’s Berkley Heavyweight big-bag award of $500.