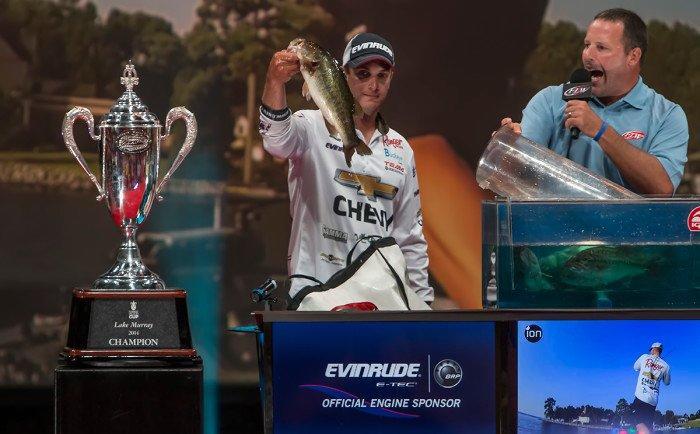 “I had two different patterns going on here,” Gagliardi said. “I had some brush piles way up the river that I was catching some of my biggest largemouth off all week. Today the schooling herring fish bit for me pretty good but I thought I had made a mistake. I had it in my mind I needed to run up to the river and get a big largemouth. But I ran up there and never got a bite. But I made a decision mid-day to run back down and stopped on a place I hadn’t got bit all week and caught one of my biggest bass. I feel like every decision I made was the right one.

“The first day I caught them on a shallow herring bite. It was something you see happen in April here. They were on a shallow point at the back of a long neck creek. I caught those fish on a Basstrix Swimbait on 16-pound Gamma fluorocarbon line and 7-foot, 2-inch Batson Rainshadow Rod. The majority of the time I fished a Zoom Super Fluke over deep humps on 10-pound Gamma fluorocarbon on a 7-foot, 2-inch Batson Rainshadow Revelation rod. And then two key fish this week I caught fishing a 10-inch worm in deep brush.

â€œThere was a little boat on the spot I wanted to start on this morning where I had caught 3 keepers yesterday,â€ Gagliardi said. â€œI started working the area near him where fish were surfacing. Turns out it was a local with a known reputation on the lake who has been nicknamed Mr. Personality for his on-the-water confrontations. He cussed me out pretty good this morning too. But I fished around him as best I could. He wasn’t mad at me for fishing there. He was mad that I brought the flotilla with me and now everyone saw his spot.

â€œHe rattled me really good. At one point he even told me I needed to go out and get a real job. I never argued or conversed with him. But watching fish bust and surface on the other side of him where I couldn’t fish really rattled me early. I did manage to catch a limit there before I left. He only stayed about an hour and left.

â€œAfter Hartwell this year, I did well, and I was able to stay positive all year after that. The DQ at Okeechobee had me down, and I sometimes have a hard time bouncing back when I take a hard loss or struggle.

â€œTo win the Forrest Wood Cup is unbelievable. But to do it here it’s just so much more special. The people that came up to me genuinely wanted me to do well. So I’m happy I was able to give them something to pull for and see it through for them and for me.â€

To take a zero in the first event of the season with a DQ, then he ties for the last place spot to get into the Forrest Wood Cup and wins on the tie-breaker and finally wins the Forrest Wood Cup on his home lake by 1-ounce after a dead-fish penalty. Simply the most amazing comeback I have seen in bass fishing history.

Just as amazing was how some of the anglers duked it out back and forth, leads changing with seemingly every bass. Here’s what the other anglers had to say about this week: 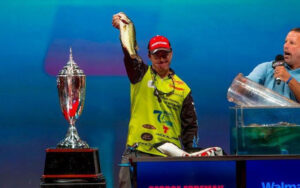 The first day probably cost me because I only caught 4 fish. Then the second day, I figured out something that I could do the rest of the tournament. I had some long points down lake that I was fishing topwaters on for schooling fish. And then I had some stuff flipping up the river. I went up there 2:30 the second day and flipped up two big ones.

I just had a couple mishaps today that ended up costing me. I got on a little shade lines with some grass and wood mixed. Down lake I threw a Zoom Fluke, Reaction Innovations Vixxen and Jackall Mudsucker for the schooling fish. Up the river I was using a Dirty Jigs 1/2-ounce flipping jig. I threw a variety of buzzbaits in black with black frogs. I caught a big bass yesterday on prototype buzzbait with a frog on it. I fished all Halo rods: 7-foot medium power for topwaters, 7-foot, 3-inch medium heavy power for Flukes and buzzbaits and 7-foot, 6-inch Heavy power for flipping the jig. 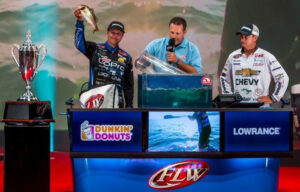 I didn’t have that great of a practice. My game plan was to fish schooling fish in the morning and then run topwater and brush later. Each morning I was catching schooling fish on a Yamamoto D-Shad. That was key for me to get those three bites early and then fill out the limit. I throw 14-pound Sunline FC Sniper for my single and double D-Shad rigs. I use a Gamakatsu EWG hook on each one and had one on a leader on a swivel that slides up the line. I didn’t start throwing the double rig until day 3 and my first cast I caught a double. I could throw it farther so that was key on day 3 for me.

I caught several key fish on the Lucky Craft Gunfish 115 and a few on a drop shot with a Roboworm and 1/4 ounce Reins Tungsten weight. I used Daiwa Steez AGS guides spinning rod with a Steez Reel with 12-pound Sunline braid and 8-pound Sunline fluoro leader for drop shot.

I used Daiwa Tatula rod and Tatula Type R reel for my topwater setups with 20 pound supernatural on the Gunfish and 14-pound Sniper on the D-shads. 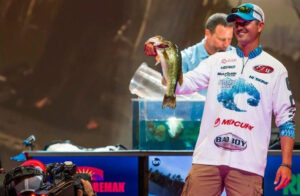 I was running a shallow topwater program in the morning. 6-foot, 6-inch Quantum Smoke Rod, Quantum EXO reel 15-pound Hi-Seas mono. Caught the majority of my fish on a Pop-R. Today I had a 4-pounder and a 6-pounder come up on the Pop-R, jump all around and over it but never even touch it.

I fish a lot better when I’m tired. I need all the practice I can get. I’d practice 2 weeks if they’d let me. 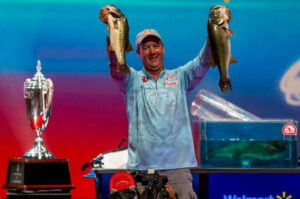 Kennedy spent most of his week just getting by with limits right around 10 pounds each of the first three days. In fact he squeaked into the final-day, top-10 cut by 1 ounce over day-two leader Philip Jarabeck. Then blew the doors off the Colonial Life Arena in Columbia, S.C., with the biggest limit of the whole tournament at 20 pounds, 2 ounces on arguably the toughest day of the event.

Kennedy was here in 2008 and got a tip that there is a mayfly hatch up the river. With a short practice Kennedy went looking for the mayfly hatch up the Little Saluda River. In practice he saw 5-pound class coming out of the water and eating mayflies. But the heavy rains that had rose the river finally quit and the river receded and made the pattern a little sketch the first few days.

I fish better when I have a day or day and a half of practice. I don’t fish well with 3 or 4 days of practice. Seems like fish that are biting good early on a long practice aren’t there for the tournament. I do better that way but I don’t know why. 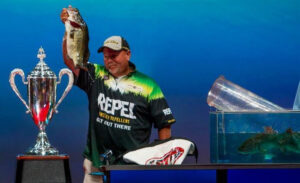 I was fishing shade pattern, flipping docks and shallow cover up the Little Saluda River. The clouds hurt me some but every day I was able to find some new water and get the fish I needed to keep advancing. Today I had four little keepers and that big 6-pound kicker. 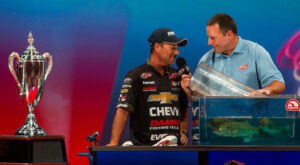 I caught most of my fish this week on a Damiki Dolphin and D-Pop 70 topwater baits on schooling fish on the lower end of the lake and a Damiki DC400 crankbait up the river. I had a spot up the river that I could catch a limit on in 15 minutes but they would only weigh 8-10 pounds. When my topwater stuff didn’t work out this morning I was looking forward to going cranking and just catching all I could. I rolled up there and those fish were gone. I don’t know where they went. 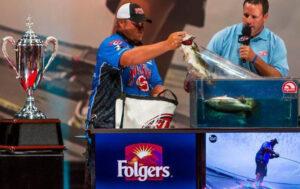 I fished offshore all week. I was fishing main-lake humps with a Carolina rig. Most of my bass came from 20 feet or deeper this week. I tried making the shallow thing happen, but I kept thinking about those offshore fish when I did that so I just spent my time out there the rest of the time. 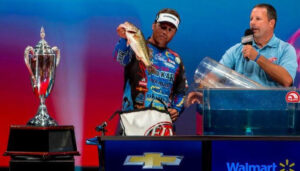 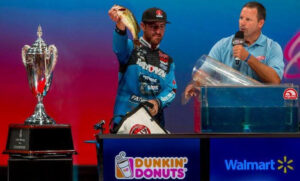 I caught most of my bass this week on an Accent Buzzbait that you can fish a soft plastic bait on it. It seemed like they didn’t want a prop bait or a popper this week. They wanted something that kept moving.   I just never got around enough of the right fish. 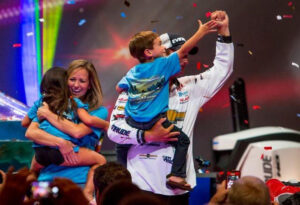 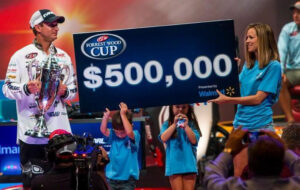