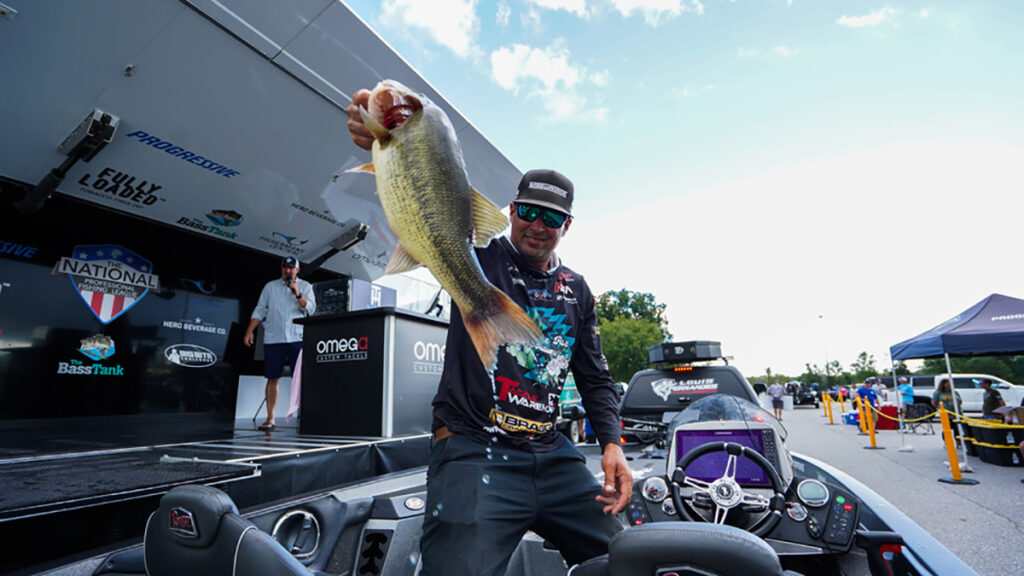 With the 2021 NPFL season behind us and new things in the works, 2022 is on everyone’s mind. As the inaugural season closes, plans are being made and anglers are getting geared up for season two. Check out the 2022 Schedule below and see what some of the anglers have to say about each destination.

Season two kicks off early March on Burnside Kentucky’s Lake Cumberland. With anglers coming off a season that saw largemouth, spotted bass and smallmouth throughout the year, Cumberland offers anglers the chance to target all three.

Kentucky angler Corey Null has spent some time on Cumberland but most of the experience has been after the spring timeframe. Null wants to wait and see how the weather plays out before making any bold predictions but is hoping for some sort of cranking deal or dragging a jig.”

“Between the spots, largemouth and smallies, it will be some sort of combo deal that wins unless someone completely dials in one species big time. I am positive it will be a mix. There are good bags of smallmouth and largemouth out there at that time and the person who figures both of those species will win the tournament. Early guess without knowing the weather, I am going with 15-pounds plus per day to win.”

Stop two of the NPFL season brings the anglers to South Carolina’s famous Lake Hartwell at the end of April. A short while into spring, anglers can expect to find some quality fishing conditions with fish in several phases of the spawn. The kicker is the weather.

South Carolina angler Bryan Tyler has fished Hartwell a handful of times and expects anglers to be focusing their time on the shallows with all phases of the spawn playing at some level.

“There should be fished getting ready to spawn, on the spawning beds, and probably some fish finished. This all depends on the weather, if a big cold front comes through, and it happens in April on occasion, it could change some things.”

Tyler notes how unique Hartwell can be with spotted bass being caught deep while largemouth roam the shallows. In April, the dominant factor should be the shallow bite.

“I think it will be won on largemouth, and that’s not saying you can’t catch some spots, but they won’t be big enough to win. The spots will be more scattered while the shallow deal should be more stable, and guys will catch more fish up there.”

Bay City, Michigan will play host to stop number 3 of the NPFL season. In early June, anglers should be looking at a quality fishery at a good time. Veteran angler Gary Adkins has fished all over the country with success but enjoys catching Great Lake’s Smallmouth Bass. Adkins expects all phases of the spawn to be taking place in the super clear water of Saginaw Bay.

“The fish will probably be spawning, and all phases should be going on. Anglers will get to choose how they prefer to catch fish, but the sight fishing will be good. This place has giant caliber smallmouth but also a big population of largemouth too.”

Although the noted size difference may keep some anglers from targeting largemouth specifically, big winds may limit the angler’s ability to effectively fish for the spawning fish and may force some plan changes.

“There is a great population of largemouth bit there are a lot in the 3.5 to 4-pound range. On the other hand, the smallmouth are a little heavier in the 4 to 6-pound range. Anglers can target either species with success. If you’re a smallie guy, you will have no problem finding smallie beds.”

The fourth stop of the NPFL season brings the anglers back to the state of Tennessee to Watts Bar Reservoir. Coming in at the end of July, the TVA reservoir is expected to be tougher on anglers than some other events but will offer a variety of ways to catch fish. Tennessee angler Taylor Watkins, winner of the 2021 season finale on Grand Lake knows the TVA chain well is expects a similar event to Pickwick from last season.
“It’s going to be party boat central,” laughed Watkins. “It gets pretty wild on the weekends, but the weekdays will be okay. In all seriousness, this will be a grinder of a tournament and the current will be a big deal. Guys will catch them shallow and deep, but it will require guys to put their heads down and grind through it.

Similar to Pickwick, aside from a few guys at the top, there will be leaderboard changes daily with guys having slower days than the day before and vice versa.

“Some guys will catch them really good and then have a hard time getting bites the next day. The other factor is the grass too, it depends on what kinds grow and how good. It should be fun regardless.”

The second to last stop of the 2022 season brings anglers back to the north to the Great Lakes and Lake Erie. At the end of August and beginning of September, anglers will be fishing during the fall transition with fish yet again on the move. Trophy sized smallmouth bass will be caught shallow and deep on a variety of different baits. Gary Adkins has more history on Erie than Huron and Saginaw Bay, but once again believes the lake will produce well for anglers.

“It’s the very start of the fall. There will be some fish deep and some shallow, and a very good reaction bite with crankbaits and swimbaits being factors. I still think with some fish moving shallow, this event will be won deep.”

The key to this event will be the availability of Canadian water to the NPFL field. Otherwise, anglers will still be able to catch both a quality and number of fish overall. Adkins notes another good population of largemouth, but the winner will have all brown fish.

“I am guessing about 22-pounds per day to win, and all smallmouth. Some guys will catch green ones, but they won’t win doing it. If the wind blows hard, we may not be able to leave the bay and it may play into the largemouth more, but you can leave and tuck behind the islands and still get them good. It all depends on the wind direction.”

The final stop of the season ends in the sunshine state on the famous Kissimmee Chain. Lake Toho plays host for the finale in early October and anglers again should hit it in time to catch some quality Florida bass. 2021 NPFL Angler of the Year Keith Carson knows the chain well and is looking forward to fish in his home state at a unique time of year.

“Regardless, I’ll be excited to fish in Florida,” laughed Carson. “It should be fun, and it could be really good.”

With the amount of spraying of vegetation taking place in Florida, Carson is hoping for good rains to keep the grass growing.

“Without the grass, it could be tough. If we can have some nice weather prior and get the vegetation growing, it could be very good. Hopefully they don’t spray the weeds. If they do, were looking at 17-pounds a day with potential for 25-pounds or so per day if there is good grass.”
With the 2021 season stop in Florida being dominated shallow, Carson thinks it could be setting up for some sort of offshore deal.
“If it sets up correct, and they water stays high, it will be good shallow fishing but if they kill it all and its dry, some sort of offshore bite will probably win.”