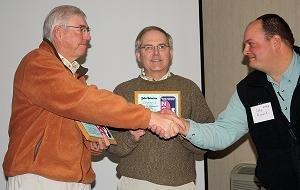 Northland Fishing Tackle founder and President John Peterson along with his brother and longtime business partner Duane Peterson were named NPAA Honorary Lifetime Members for their continued service and commitment to the future of fishing. â€œThis is a great honor. I was one of the charter members of this organization and Northland was the first supporting partner,â€ said Peterson at the NPAA’s recent conference in Bloomington, MN. â€œI feel the NPAA has done more to professionalize fishing than any other organization.â€ Brother Duane urged the anglers present, â€œThink about being a pro every day, but don’t forget the grassroots â€“ the youngsters and families â€“ recruit them and take them fishing.â€

John Peterson had fished the pro-side of the Professional Walleye Tour (PWT) for 15 years, but was forced to tend to business that was â€œgrowing by leaps and bounds.â€ Always intent on making a living doing what he enjoyed, Peterson described his 140-employee company and how he expects double and triple digit growth in the next three to five years.

He said, â€œOur terminal tackle is the nuts and bolts of what customers need. Our business has been recession-proof because more people are fishing.â€ He may get back into tournaments, but the immediate future will include new product direction, including â€œfieldâ€ work.

New senior marketing and promotion manager Eric Naig spoke at the same conference, saying â€œPromotional anglers are the backbone in our sphere of influence and they drive our business. The route is from your boats to the grassroots.â€ He cited sales tie-ins at the retail level as a key to success. He said the marketing team needs two-way communication and requires accountability. â€œWe want to know what pro team members are doing, because their input is very valuable.â€

In closing, he advocated, â€œTake a new person fishing this year.â€