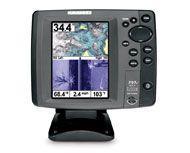 The U.S. Patent and Trademark Office has granted U.S. Patent No. 7,652,952 to Johnson Outdoors Inc. for the Humminbird ® Side Imaging ® technology.   The approved patent protects Humminbird’s Side Imaging sonar systems from unauthorized copying.

â€œOur Side Imaging sonar technology is one of the most heralded innovations in the marine electronics industry in decades,â€ said Kelly Grindle, Group Vice President of Johnson Outdoors Marine Electronics & Watercraft.   â€œIt is a game changer for anglers who demand the best equipment available to help locate and catch more fish.â€

Humminbird first introduced Side Imaging sonar in 2005 in two of its 900-Series fishfinder models.   Spurred by consumer demand, Humminbird expanded its offering of Side Imaging models to its 700-, 800-, and 1100-Seriesâ„¢ product lines.

Side Imaging sonar produces dramatically detailed and recognizable images of underwater objects and the bottom.   These images allow anglers to pinpoint habitat, structure and drop-offs, which are prime holding areas for fish.   With a coverage area of up to 480 feet side-to-side, anglers can search more water in less time to find the most promising areas to fish.