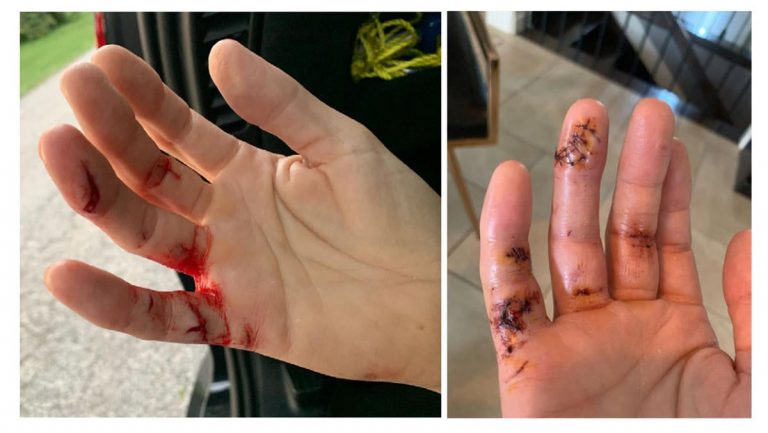 Triathlete and coach, Matt Gervais of Ontario, Canada, was training for an upcoming triathlon on Lake St. Clair in the middle of August when he an unexpected encounter with a larger predator fish about 50 yards from shore. An aggressive muskie latched on to his right hand not 5 minutes into his morning swim. Without thinking, he grabbed the fish with his other hand which startled the muskie and caused it to let go and bolt out of there. But Gervais was left with a pretty badly lacerated hand.

“It was very painful and the pain was immediate,” Gervais said. “I caught it eye to eye, underwater with my goggles … we had a look at one another before it darted off.”

Gervais was training with another swimmer at the time of the attack and he was able to get back to shore quickly. His injuries to his hand required 13 stitches.

Musky and swimmer encounters are extremely rare but they do occur on occasions. Here is another incident that happened in 2020.

Obviously the muskie is not out to bite humans and likely just see the flailing hands or feet as some sort of wounded fish in the water. They are aggressive predator fish and are generally tricked into biting anglers’ large, loud moving lures.

Gervais hasn’t let the incident deter him from swimming in St. Clair. It acknowledged that is was a freak accident, but also noted that he will likely swim harder and faster in that particular stretch of water from now on.