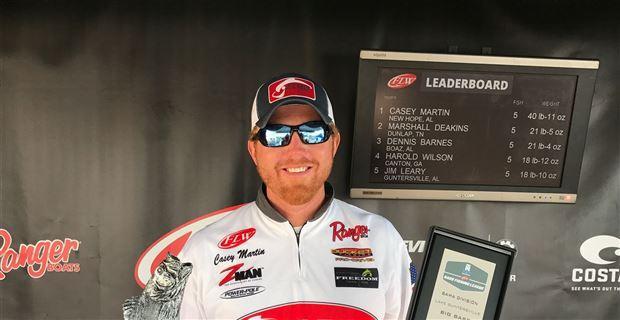 Former FLW Tour champion Casey Martin had the day of days in the first BFL tournament of the 2017 season for the Bama Division on Lake Guntersville. Martin caught a 5-bass limit weighing 40 pounds, 11 ounces, beating second place by 19 pounds, 6 ounces.

We spoke with Martin this morning about the amazing day on Lake Guntersville.

“I had no idea I would catch them like this in practice,” Martin said. “In fact, I started my day fishing for spotted bass because I wasn’t sure I could catch a limit of largemouths doing what I found in practice. So I went to my spotted bass spot and caught 3 spots and a couple largemouths real quick and my co-angler caught 3 spotted bass that he ended up weighing. After that I ran around and fish some grass and was able to cull up to about 13 or 14 pounds. At that point I knew I probably caught enough to get my entry fee back so I decided to start running some stuff on the main lake.”

Martin ran around and stopped on a spot. After about 10 minutes he started noticing fish and bait under the boat on his electronics. He picked up a Picasso Double Barrel 1/2 ounce under spin with a 4-inch Z-Man DieZel Minnowz on the back. He immediately caught one nearly 7 pounds. He noticed his graph was lighting up with big arches now. His bait pulled off the jighead and he needed to superglue it back in place so he set it down and picked up a big swimbait he had rigged on another rod. He caught a 9-9 on the next cast. Then two 8 pounders and finished up a limit with a 5 pounder on the Diesel Minnow and underspin again.

“I thought the first fish was a high 6 [pounds]. Then I catch the next one and I thought it was a 10. Then I was completely confused because the next two were 8 pounders and I started thinking I was big eyeing them. I thought to myself I must be thinking they are all huge because I’m so excited. So I probably have like 33 or 34 pounds. I ran around and fished a few more places and culled out my 5 pounder late in the day with a 7-pounder on a Rat-L-Trap.

“When I got to the weigh in I was still in disbelief and a lot of good anglers who have weighed 35 pound bags in tournaments here were in the weigh-in line so I figured it really wasn’t that big of a deal and I’d weigh another one of those 35 pound bags. Then I got to the scale and I saw 40 pounds but the weigh master had his hand on the scale and I figured he was pushing it down and it would settle back at 36-37 pounds. Then it hit 40 pounds 11 ounces and I was in shock. We weighed two fish for big fish and my biggest was 9-9. In the craziness of it all they threw my other three back while I was talking to another angler. I held the two big fish up to the crowd so I’m hoping someone got a picture at least of the two big ones. But I haven’t had a picture sent to me yet.

“I’d love to have a cool story of how I was on them. But I really wasn’t. I just knew where to run around and I just hit those fish I guess right when they pulled in and I think that smaller Diesel Minnnowz on that Double Barrel was the deal. No one throws a little swimbait like that. I throw it all the time guiding (you can find his guide business is at CaseyMartinFishing.com) and that seemed to get that school to fire and then I had 3 big ones on another big swimbait once they fired. They were so big they couldn’t jump. Which was the saving grace because on those big swimbait fish I thought I’d lose them if they came up and jumped and threw that big bait. So I was fortunate they couldn’t get themselves out of the water to throw the bait. It just all worked out. What’s crazy is I went Sunday and finished 5th in the ABA and was praying for 4 and 5 pounders, and the day before, I was throwing them back like they were 2 pounders. It’s just how it goes in fishing. One day you hit it perfect, and the next day it humbles you.”

Martin’s catch is the third largest one day catch in FLW history and second largest BFL catch. Keith Combs caught 41 pounds, 1 ounce in Costa FLW Series event in Texas, and Rogne Brown weighed 40-14 in a BFL on Lake Chickamauga. It may also be the largest margin of victory in a BFL but we have not yet confirmed that with FLW. 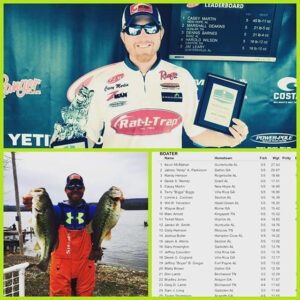