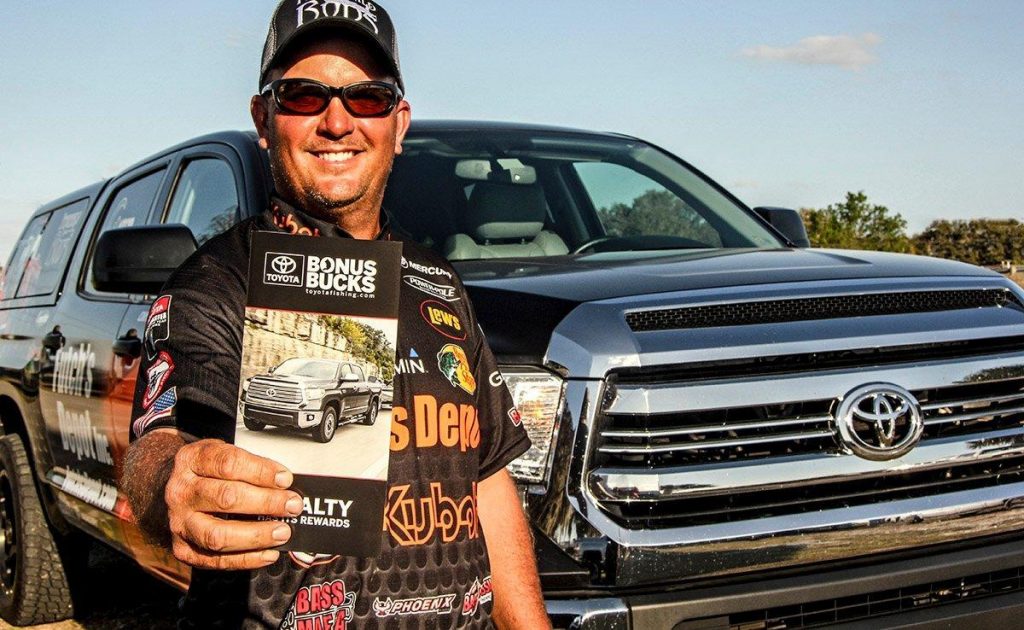 Florida pro Cliff Prince had a great tournament at Lake Okeechobee. He finished 3rd and won $20,000 from B.A.S.S., but his 28-year allegiance to Toyota has lead to even more cash dividends.

As a result of being the highest finishing registered participant in the Toyota Bonus Bucks Program, Prince got paid $3,000 from Toyota.

“I’ve had Toyota Trucks since 1989 for hunting, fishing and work,” says Prince.

“There’s no doubt when I heard about the Bonus Bucks program, back when I was fishing as a co-angler in the Elites, I knew I’d buy a new model Tundra, I already loved Toyota, and Bonus Bucks is a really cool program for tournament fishermen,” says Prince.

Prince’s loyalty to Toyota doesn’t stop in freshwater. “I also love my Tundra because I can pull my 30-foot Contender saltwater boat with it, without having to buy a big diesel.”

“I think you could make the world turn on its axis if you had a rope, a post, and a gopher hole, to pull the globe around in circles with a Toyota Tundra,” grinned the Palatka, Florida pro, whose primary sponsor is tractor sales and service dealer called Futch’s Depot.

“We’re just a Toyota family,” says Prince. “My daughter is about to start driving, and we’ve already got a Camry to use as her first car.”

Like Cliff, you don’t have to win a tournament to win the “Bonus Bucks” – you just have to be a registered participant in any of the dozens of tournaments sanctioned by Bonus Bucks, and be the highest-placing participant. To learn more and get signed-up, please visit http://www.toyotatrucksbonusbucks.com/ or phone (918) 742-6424, and ask for Jessica or Kendell and they can also help you get signed-up.