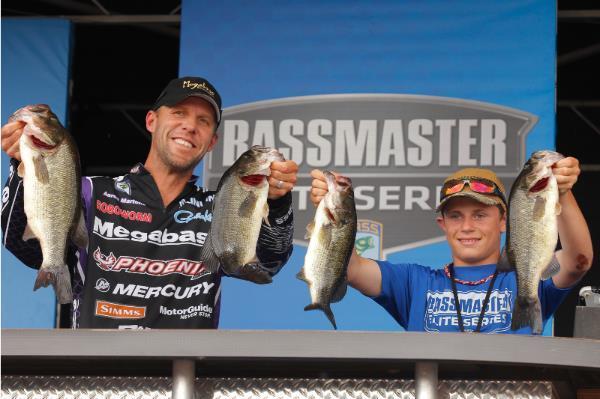 After three days of competition, Aaron Martens was just 7 ounces from victory in last year’s Bassmaster Elite Series event on the Mississippi River.

Now Martens gets to play out a similar scenario on the same river, and he’s going for big bass in the same spot that put him in contention in 2012. And, oddly enough, once again 7 ounces plays into his game.

But now the advantage is his.  On Saturday, Martens put himself 7 ounces in front of his nearest challenger in the Diet Mountain Dew Mississippi River Rumble presented by Power-Pole.

Martens of Leeds, Ala., amassed a 47-pound, 12-ounce total for the Rumble’s third-day lead.

Tommy Biffle of Wagoner, Okla., was the angler trailing Martens by 7 ounces. The day’s largest five-bass sack of 17-5 put Biffle in second place with a total of 47-5. In third place was John Crews of Salem, Va., with 42-14 â€” 4 pounds, 14 ounces behind the leader, or the size of one fat Mississippi River bass.

Brandon Card of Caryville, Tenn., pulled up into fourth place with 42-8. Fifth place was taken over by Fred Roumbanis of Bixby, Okla., with 41-9.

The field was cut to the Top 12 for Sunday’s final round, a competition for $100,000 and an instant-in for the 2014 Bassmaster Classic. The spread between first and 12th place was 6 pounds, 14 ounces. The last three anglers on the list all have the same weight, 40-14. The pros in seventh place through ninth place also have the same weight, 41-2.

That’s close enough for any of the 12 to win.

Martens, of course, would rather be 7 ounces ahead than 7 ounces behind. He said he knows his small lead isn’t significant. And the six-time Bassmaster winner is concerned his cache of largemouth bass will run dry.

â€œThere are 4-pounders there, and lots of them,â€ he said, then retracted: â€œWell, maybe not lots of them now.â€

By  Saturday, he was slowing down and fishing more methodically. He also had to cover more water to get the bites he needed.

â€œBefore, I hit one spot and was catching them on every cast. It’s not like that anymore,â€ Martens said.

Martens’ 16-5 bag of five largemouth included the largest bass of the day, a 4-15, and the leading contender for the Carhartt Big Bass bonus of $1,000 bonus plus another $500 for wearing Carhartt apparel. It was his fifth keeper of the day, he said. With those in the box, he backed off his main area to save some for  Sunday.

Martens was declared the leader of Day 2 after Brandon Palaniuk’s second-day weight of 19-3 was disqualified  Fridaynight because he culled a bass in Minnesota waters, which is against that state’s law. Without his Day 2 weight, Palaniuk fell out of Saturday’s 50-cut.

Thus Martens received the Livingston Leader Award, a $500 bonus for heading up the leaderboard after two days.

â€œI felt bad for Brandon, but also relief at the same time,â€ Martens said. â€œI think he would have dominated, been hard to catch. It would have been tough to beat him. Now I have a chance to win.â€

Biffle has been managing one sweet piece of smallmouth heaven he said he found â€œby accidentâ€ during practice. For three days running, hitting that spot in the afternoon has been the key.

â€œI didn’t want to fish it out, and I didn’t want anyone to see me on it. But I’m going to start on it  tomorrow,â€ he said. â€œI think I can catch an 18-pound bag if I stay there all day.â€

Biffle has been increasing the size of his bags each day: 14-0, 16-0 and then today’s 17-5, which included three smallmouth from his secret spot. His other two were largemouth taken by flipping within minutes of the launch site.

Biffle is a six-time Bassmaster winner, including three Elite Series titles in 2006, 2009 and 2010. He’s doing well this year and has a solid chance after the eight-event regular season for a Bassmaster Classic berth by earning enough points. But he’s after the instant qualification that comes with an Elite win.

â€œI would rather have the win-you’re-in deal. That way I don’t have to worry about it,â€ he said.

The Rumble’s outcome  on Sunday  could solidify Edwin Evers’ lead in the 2013 Toyota Bassmaster Angler of the Year race. Going into the Rumble, Evers of Talala, Okla., led the AOY race by 25 points over Skeet Reese of Auburn, Calif.

Evers qualified for Sunday’s final round, thus giving him a chance to squeeze more points out of the Rumble. Reese did not qualify for the finals. Martens, faring even better in the Rumble than Evers, is doing well enough to become a second challenger to Evers.

All Elite pros are earning points that count toward securing a Classic berth and a qualification for Toyota All-Star Week, the postseason event in September on Muskegon Lake out of Muskegon, Mich.