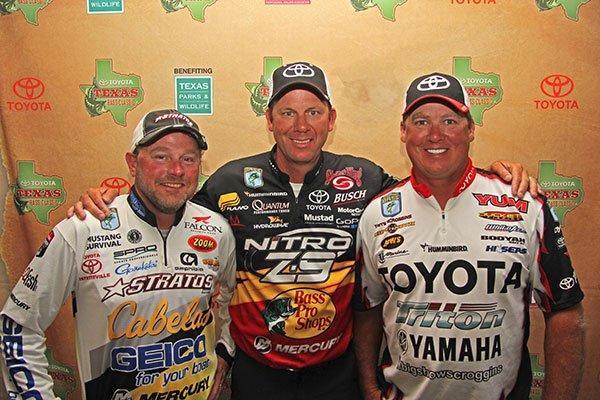 The 8th Annual Toyota Texas Bass Classic began this morning on famed Lake Fork in East Texas. It’s been a long time since the best pros in the world launched on a fishery loaded with so many huge bass. There’s definitely a buzz in the air about the giant catches we could potentially see today.

Mike McClelland, Kevin VanDam and Terry Scroggins share their thoughts and excitement in answers to five questions we asked them on the eve of this awesome event.

What do you love about the Toyota Texas Bass Classic?

KVD: The atmosphere that comes with having this many top-notch anglers in a single event, plus the chance to catch the biggest bass of your life on any cast here at Lake Fork.

McClelland: Unlike any other tournament we fish, there’s a laid-back atmosphere at the TTBC because it’s not for points, everybody gets a paycheck, there’s a lot of non-endemic companies here to support our sport, and my wife Stacy and I love attending the free country music concerts after weigh-in each day.

Scroggins: You’ve got 50 of the best pros in the world here, with no pressure to earn points, so you can just fish hard, wide-open, weigh-in, grab a free cold beer, and take in an awesome concert.

KVD: Both â€“ the guy that wins will have to fish shallow and deep.

Scroggins: Both â€“ you’ll need to catch â€˜em shallow and deep to win this.

How many pounds per day will you have to average catching to win this year’s TTBC?

Scroggins: You’d better have every bit of 35 pounds a day to win.

Three lures you think the tournament field will throw most in this event?

How many fish 10 pounds or larger will this field of talented anglers catch in 3 days?

KVD: I’ll say six bass, 10 pounds or over, will be weighed-in this weekend.

McClelland: I’ll guess nine bass will hit the scales weighing 10 pounds or over in the course of three days.