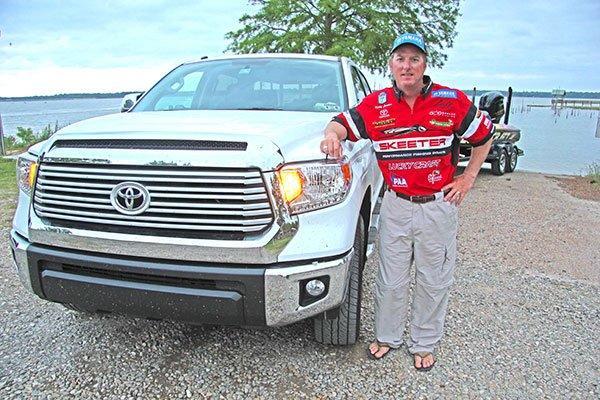 If not for a hole in the fence of a south Texas deer hunting ranch and a flooded bush in Lake Fork, the Toyota Texas Bass Classic that’s taking place this week may have never happened.

â€œI was on a deer hunt several years ago in south Texas and noticed a hole in the fence,â€ explains top pro and proud Texas native, Kelly Jordon. â€œOut of courtesy, I drove around to the neighbor and told them about it. They were grateful that I made them aware and invited me to sit down to lunch.â€

â€œBecause of all the logos on my truck, they asked me about my career as pro angler,â€ says Jordon.

As fate would have it, â€œKJ’sâ€ newfound friend and fence owner was Texas Parks & Wildlife Commissioner, Donato Ramos, who along with fellow Commissioner Dan Friedkin, shared a great desire to create opportunities that would fund urban youth fishing initiatives. Jordon told the men of his dream to combine a high profile bass tournament with his love of music.

Eight years later, Jordon’s dream, paired with leadership from Ramos and Friedkin, has generated $2 million in funds for the Texas Parks & Wildlife Department’s conservation and youth fishing projects, which largely targets kids that would likely never pick up a rod, to in turn, fall in love with the feeling of a tug on the other end of their lines.

And as for the flooded bush on Lake Fork, it’s still there â€“ just like it was two decades ago when Jordon caught a bass from it that hooked his heart and soul on the 27,000-acre reservoir responsible for raising the majority of the biggest bass ever caught in Texas.

â€œI eyed that same exact bush this past Tuesday in Penson Creek where I caught my first bass on this lake 25 years ago during spring break of my freshman year of college,â€ remembered KJ over a plate of scrambled eggs and homefries at Lake Fork Marina & Motel where he greeted so many of the legendary fishing guides that passed his table to meet their clients for a day on the water.

Jordon relates well to Fork’s fishing guides because from 1995 to 2002 he was one. And his knowledge of these waters and their famed 30-year history is on par with the best to have ever cast a deep diving plug here.

But it has changed.

The sentimental flooded bush were KJ caught his first bass is pretty much high and dry. Water levels are as low as he’s ever seen them. It was rare for this reservoir to ever get more than a foot or two lowâ€”this week, he says it’s more than three feet below normal.

The aquatic vegetation that serves as steroid shot to most any bass fishery is pretty much non-existent here nowâ€”including the hydrilla that made Fork especially magical. Jordon blames an especially harsh winter for killing off the treasured vegetation.

When Jordon was guiding here, the lake was only a decade old, the waters were sort of a black tannic color. Now they are less clear, and of a chalky, stained, color and in some areas, a bit muddy.

Jordon says the huge increase in numbers of white bass have changed Lake Fork a lot.

â€œThey weren’t here 15 years ago. Now you can’t get a crankbait to pass over a structure spot without the white bass eating itâ€”seemingly before the largemouth ever get a chance. What concerns me most is that it seems the white bass have taken over that really fertile 18 to 25-foot depth range the largemouth use to prosper in.â€

If what you’ve read thus far seems gloomyâ€”hold onâ€”this place is still going to kick out giant weights this week.

â€œIt still kicks out giant bass,â€ says Jordon, referring to individual fish in the 12 to 16-pound range. â€œYou’ll need 30 to 35 pounds a day to do well in this tournament and don’t be shocked if you see a 40-pound limit.â€

â€œThe winter was so harsh that it pushed the spawn back an entire month. Water temps are 67-72, so there are still a few giants on beds and tons more guarding recently hatched fry in less than five feet of water,â€ says Jordon.

In no particular order, Jordon is picking a football jig, a big Texas-rigged worm or lizard, large California style swimbaits cranked through Lake Fork’ shallows and a Carolina Rig.

â€œI don’t think my in-depth knowledge is such a big advantage right now because the hard-to-locate deep structure spots are either covered in white bass or the largemouth simply haven’t moved out there yet to a true post-spawn phaseâ€”don’t be surprised if you see me up there fishing the bank this week,â€ he grinned.

â€œIt won’t be that long – ’til you start gettin’ bored. I’ll be smilin’ on the river, reelin’ in one more… He can’t even bait a hook.â€ â€“ lyrics from this Sunday’s featured Toyota Texas Bass Classic concert performer, Justin Moore.