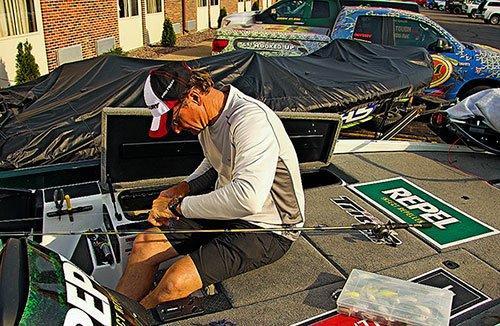 Gary Klein is having the sort of season that should allow him to qualify for a remarkable 30th Bassmaster Classic. He sits 18th in the Toyota Tundra Bassmaster Angler of the Year race.

However, in addition to the powerful rain and lighting that delayed the start of day two of the Bassmaster Elite Series Diet Mountain Dew Mississippi River Rumble, Klein’s week in La Crosse was tested by storms of concern and frustration when he realized thieves had slipped their way under his boat cover in the hotel parking lot last Friday night and stole the majority of his most important tackle just 48 hours before official practice got started.

With the help of his fellow pros, Klein is squashing adversity like summer bugs on the windshield of his Repel wrapped Tundra.

â€œThe amazing thing about this group of Elite Series pros is that within minutes of me discovering I had been robbed, no less than 15 other pros starting volunteering to give me any tackle I needed to get through the week,â€ Klein said. â€œCliff Pace, Shaw Grigsby, Russ Lane, Andy Montgomery, the list goes on and on,â€ said Klein. â€œHeck, Kevin VanDam heard about it while he was still at home getting ready to drive from Michigan to Wisconsin, and called to ask if he could bring any extra stuff from home to help me out.â€

â€œI had my boat broken into 20 or so years ago at Kentucky Lake, and they took virtually everything in it,â€ Klein said. â€œThe worst part was it happened the night before the tournament, and I didn’t realize I had no tackle until morning launch, so Greg Hines loaned me two flipping sticks and a handful of black and blue jigs, and I ended up catching the biggest limit anybody weighed-in that day.â€

â€œThese situations have a weird way of forcing you to focus harder on the actual fishing part of this sport, but it’s losing the irreplaceable stuff that hurts the most,â€ said Gary, as he sat on his Triton’s ice chest in the rain awaiting the delayed start to Day Two. One of those â€œirreplaceable itemsâ€ came from Klein’s mother’s keychain out in California.

â€œAbout thirty years ago, Mom asked me for a lure to hang on her keychain. I gave her an old topwater that’s no longer made. It was a great one. An all-time favorite. So two years ago when I visited her, I told her I would trade her for a new one. I took the old one that had been worn down to just the bone colored body home to Texas and hung hooks and new feathers on it.â€

The sentimentally rich lure shared between Gary and his mom also fell victim to the criminals’ hands last Friday night.

If you see any of the above-mentioned tackle suspiciously for sale, please call the police. In the meantime, Klein fishes with the focus that’s made him a living legend, and one that adversity won’t derail in his quest for a mind boggling 30th trip to the Bassmaster Classic.

â€œI love La Crosse,â€ Klein said. â€œThis is a great fishery. I enjoy coming up here, and I look forward to coming back again.â€