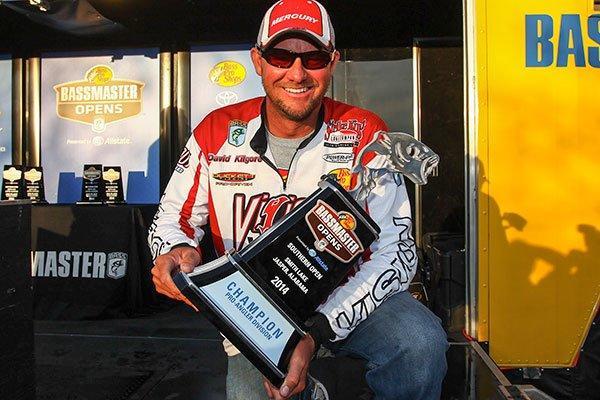 Kilgore lead the tournament from start to finish. His three-day tally of 54 pounds, 11 ounces of chunky largemouth and spotted bass earned him $6,741 and a Nitro Z9 powered by a Mercury 225 Pro XS. Even more important is an invitation to compete in the 2015 Bassmaster Classic.

Any angler that wins a Bassmaster Open tournament and fishes all three events in that division (Northern, Southern or Central) punches his or her ticket to the Bassmaster Classic the following year. This is the second year in a row that Kilgore has qualified for the Classic via the Bassmaster Opens. Last year he did so by winning a Southern Open at Logan Martin Lake.

A Strike King Tour Grade Titanium Umbrella Rig dressed with Strike King KVD Perfect Plastic Swim’n Caffeine Shads accounted for most of Kilgore’s bass. He was targeting docks that were the farthest from the main lake in short pockets. The bigger female bass were staging there prior to moving shallow.

Kilgore slowly retrieved his umbrella rig along the shady side of the docks. It often took repeated casts to coax a strike.

The final day started slowly for Kilgore. He was getting bites, but the bass were slapping at the rig and not getting hooked. This was a common refrain among many of the Top 12 finalists today. The water was much clearer today thanyesterday, which could be why the bigger bass were harder to dupe.

With only three bass in his livewell at midday, Kilgore alternated his umbrella rig with a 3/8-ounce Strike King Hack Attack Jig dressed with a Strike King Rage Tail Chunk.

â€œI was swimming the jig in the same places I was fishing the umbrella rig,â€ Kilgore said.

After that, it was game on. If a bass smacked his umbrella without getting hooked, Kilgore followed up with the jig. This ploy often put a bow in his rod.

Todd Auten of Lake Wylie, S.C., finished second with 48 pounds, 11 ounces. During the first two days of the tournament, Auten who stayed at Kilgore’s hunting cabin during the tournament, stated that he and Kilgore were sharing information, as good friends often do. However, Auten said that they were doing entirely different things to catch their bass.

Apparently, there was a lack of communication because it wasn’t until today that Auten learned that they were both fishing Alabama Rigs.

â€œI thought he was catching his bass on a jerkbait,â€ Auten said. â€œThat’s what was working for him in practice.â€

Although both anglers were fishing around docks, Kilgore was retrieving his umbrella rigs no deeper than 6 feet. Auten was running his 10- to 20-feet deep. Auten was using a homemade umbrella rig and another one made by Shane’s Baits.

South Carolina’s Michael Murphy culled through 30 bass today to bring 14 pounds, 3 ounces to the scales. It moved him up one spot to third place with a total of 47 pounds, 15 ounces.

Two different umbrella rigs accounted for the majority of Murphy’s bass, a Yumbrella and a Kahara brand from Optimum Baits. An Ima Flit 120 jerkbait did the rest of the damage. Murphy caught some of his bass today by following up with the jerkbait after a bass missed his Yumbrella rig.

The big mover today was co-angler Carlton Tipp from Grand Bay, Ala. His 11-pound, 3-ounce, three-bass limit jumped him from 10th to first place with a total weight of 24 pounds, 5 ounces. He happily hoisted a slick trophy and claimed a Skeeter TZX170 powered by a Yamaha F115LA outboard.

The Allstate Good Hands, Great Day award for climbing the most points from Day 1 to Day 2 goes to Stanley Gunter, who wins $250, and Drew Dupre, who wins $150.