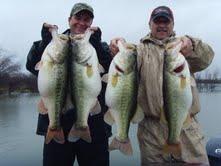 Goals are good. We apply goals to everything in life and celebrate when we achieve them. One of my goals last year was to fish Lake Falcon before the â€œhey dayâ€ was over down south. I did. I fished with Keith Combs. The weather was brutal. Strong wind, higher than ever water levels and cold fronts put the fish in unfamiliar places.

But I was elated like a kid who asked for the new Clone Trooper tank for Christmas and got it. We launched the boat and jetted out across the massive impoundment finally coming off pad in a nook in some flooded buck brush. Within minutes of our first casts we were reeling in our first bass of the day. The action was fair, but we didn’t catch a bass more than about 2 pounds. Combs knew it was time for something different.

We pulled out to a roadbed down the lake, and armed with spinnerbaits and swimbaits, we witnessed Falcon Lake in its true colors. We landed a 27-pound limit that day, and by the end, I was giddy. Back at the ramp, Keith had a different opinion. â€œI’m sorry man,â€ he said. â€œI thought we would have caught them better today.â€ I thought he was joking. He wasn’t.

For Combs, anything under 30 pounds is really below average down south. Don’t believe it? Well think about his 24 days on Falcon in the last two months. The week before practice for the FLW American Fishing Series event on Falcon started, he had guide trips that produced 40-pound limits for seven straight days.

Some anglers won’t even set a goal of 40 pounds because it doesn’t seem realistic. But Combs knows better.

â€œI could have had a 50-pound day in practice,â€ Combs said.

Hearing him tell the story, I was on the edge of my seat like imagining Bruce Willis escaping some impossible situation in one of the Die Hard franchises. But understanding how he found a true beehive of bruisers will help bass anglers on any offshore lake.

â€œAll the shared offshore guiding spots were covered up with boats as word had leaked before practice about the good deep bite,â€ Combs said. â€œI realized those places weren’t going to hold up through practice and the tournament. I decided to put in the work during practice to find offshore spots that no one else found. The Navionics chips are so good now, everyone finds the same stuff. But I looked for areas that weren’t marked on the chips, and I spent the time idling around studying my graph. I idled over flats, road beds, forests of trees, creek channels and tried to find where different features intersected.â€

Through three days of practice, Combs had found just a couple spots. But was still searching for the mother lode for the tournament.

While idling down a long road in 20 feet of water, he noticed a rise where the roadbed intersected a field of trees then met another road right on the edge of a creek channel.

â€œIt was a spot that had everything,â€ Combs said.â€ One of those spots you dream of when fishing offshore.â€

Combs had the spot so dialed in that he knew the specific bush to cast to at the intersection of the roads. His first cast to the bush, a fish took him for a ride. He fought the bass subtly trying not to draw too much attention to himself. The bass charged towards the boat, and Combs could see it was 10 or 11 pounds before it pulled loose. On his next cast, he hooked a fish he couldn’t control. It wrapped him in a tree and tore loose. A few casts later, he had another bass more than 10 pounds. At that point he knew he had to get out of there before anyone saw what he had stumbled upon.

Combs experimented with baits and other spots and hit two more bruisers later in the day. His confidence beamed going into the tournament.

The first day of the tournament, Combs ran down to the sweet spot. He and his co-angler partner caught big bass as rapidly as a fry order cook making burgers in a greasy spoon. But the wind kept building. Before long, he couldn’t hold on the target. Resourcefully, he tied to a tree. The wind blew so hard that the tree broke from the force of the boat in the surging waves. They had to abandon the spot and start working back to weigh-in through some of the roughest water Combs has seen on Falcon. He weighed 29-01.

The second day the waves were worse in the morning. Combs got to his spot, but it was impossible to hold. His co-angler managed a 7-pounder as they drifted, but Combs wasn’t able to fish effectively and abandoned the spot. In hindsight, he wished he had tried to stick it out longer. He weighed a meager 17-12 on day two.

The final day the winds subsided, and Combs knew he’d be on his spot all day. He told tournament director Ron Lappin that he might wind up with 50 pounds that day. I don’t know about other anglers, but I can’t imagine uttering the words “I might have a five-bass limit that will weigh 50 pounds” to a tournament director before heading out the last day of a major event.

It was early and often for Combs as he put together the largest single-day limit in FLW Outdoors history. His 41-01 limit bested the former record by 1 pound, 6 ounces, which was also set on Falcon Lake by Forrest Wood Cup champion Greg Hackney.

In typical Combs fashion, he was humble and unassuming about his record-setting catch. “I really shot myself in the foot on day two,” he said. And the real kick in the pants is that Combs lost to Michael Yoder by 5 pounds, 10 ounces, who had an amazing 93 pounds, 8 ounces for three days of fishing.

Combs summed up the keys to his amazing catch and prespawn fishing on Falcon Lake in general.

“You had to be lined up perfectly on each cast because there was a narrow lane between the trees,” he said. “The bass get on small key spots. If you didn’t make the cast to the one bush, you didn’t catch a big one. You just caught little 3- and 4-pounders. I used the heaviest rod I could find, a PT05-76 Power Tackle rod, which was actually made for punching matted grass and 25-pound Seaguar AbrazX fluorocarbon. If I didn’t feel the initial bite, I had no chance because they would wrap me in a tree. So as soon as they bit, I had to crack them and then crank them through the lane in the trees. I only lost one fish the whole tournament. The rod is sensitive enough to feel the light bite but heavy enough to move the fish clear of the trees.”

“I really believe it looked more like a tilapia to them,â€ Combs said. â€œWe need to stop patterning bass down there and learn to pattern tilapia better. I guided, practiced and tournament fished for 24 straight days there. Anywhere we went that we saw a beat-up tilapia on the surface or saw a tilapia scurrying away, we caught giants. Every day after the event we would catch four to eight bass more than 9 pounds.”

To go hog smashing with Combs on Falcon Lake, look him up at http://www.trophybassguide.com/.