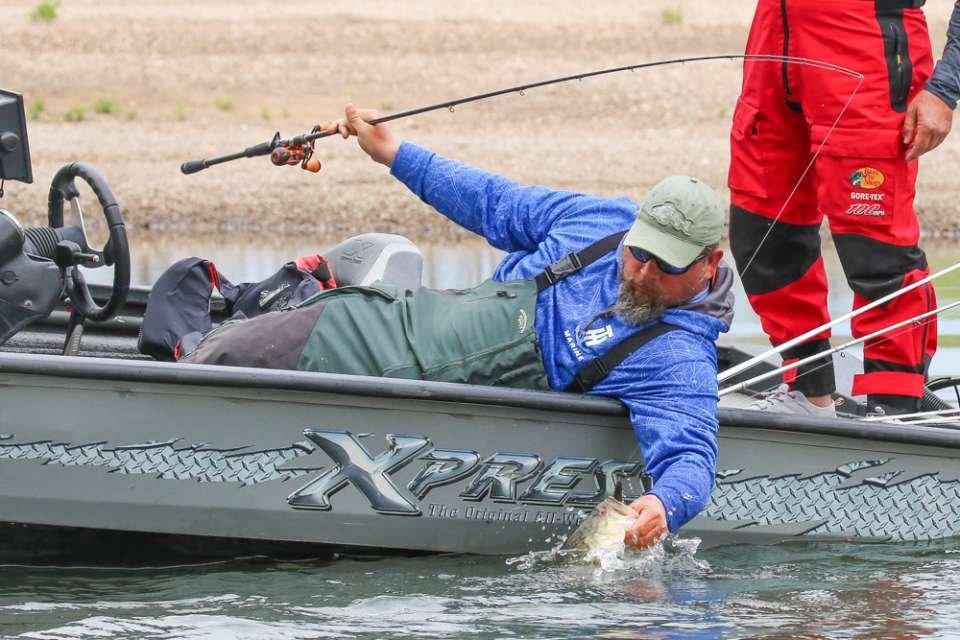 EDITORS NOTE: Horne fishes out of an aluminum Xpress Boat that was key this week for him getting into backwater areas to find spawning bass.

Bass kept moving into his area every day, and Harvey Horne kept intercepting them to win the pro division of the Bass Pro Shops Bassmaster Central Open on the Arkansas River.

Keying on fish moving shallow to spawn each day, Horne tallied a three-day total of 15 bass weighing 52 pounds, 7 ounces, to claim his first Opens victory and take home a Skeeter ZX200 bass boat with a Yamaha VF200LA outboard motor package worth $58,000 plus $5,075 in cash. He also qualified for the 2018 Bass Pro Shops Bassmaster Opens Championship, Oct. 18-20, at a location to be announced later.

The Bella Vista, Ark., angler said he caught his limit by about 9:30 a.m. Saturday and finished with 18-8 to seal the victory. “I caught three of the fish off beds today and caught two out of brushpiles in a little deeper water,” he said.

His main lure throughout the tournament was a Big Bite Baits Dean Rojas Fighting Frog (in the confusion, tilapia and hematoma color patterns) attached to an All-Terrain Swing Head Rock Jig with a 6/0 Gamakatsu G-Finesse Hybrid hook.

Horne said he usually never goes out the final practice day for the Opens, but this past Wednesday he wanted to check out one last spot. When it produced a 6-pounder, he decided it would be one of his primary areas for the tournament. The area was a small gravel pit off the main river that featured a hole about 10 feet deep.

“They had pulled into that little area to spawn,” he said. “The females were sitting out there in the middle in a little deeper water, and the males had pulled up on the beds. I didn’t catch any bedding fish until today.”

He believes spawning bass moved onto the beds Friday night. 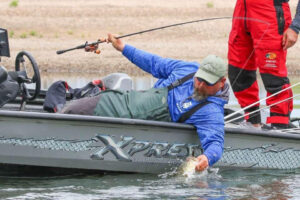 Lake Fork guide Justin Margraves also targeted spawning bass to finish second with 48-9. “I had one area that had fish moving in to spawn, so I had more fish showing up every day,” he said.

The Diana, Texas, angler caught all of his bass each day on a black-and-blue 5/16-ounce Santone swim jig and a black-and-blue Strike King Rage Craw.” Margraves said he was fishing the swim jig “like a topwater bait” in muddy water 1 to 2 feet deep.

Derek Hudnall of Baton Rouge, La., finished third with 47-8, followed by Bassmaster Elite Series pro Justin Lucas of Guntersville, Ala., with 45-13 and Tyler Rivet of Raceland, La., with 44-14.

Joe Lee of Midlothian, Texas, recorded his second Central Opens co-angler victory by catching a three-bass limit of 11-10 to finish with 29-1. He received a Triton 179 TrX bass boat with a Mercury 115ELPT Four Stroke outboard motor package valued at $27,000.

The Texas angler also won the 2014 Central Open at Lake Amistad. The first two days of the event, Lee flipped a green pumpkin 6-inch Gene Larew plastic lizard with a rattle inserted into it. On Saturday, he caught his first keeper on the lizard, but then switched to a Zoom Speed Craw in emerald blue to complete his limit.