The Burnside Policed department reported on the evening of April 19, 2018 that it apprehended Donald Weber of Burnside, Ky. after an investigation into the stolen fishing gear from Canadian FLW Tour angler Jeff Gustafson’s truck on April 16, 2018 on Burnside Island while Gustafson was in town fishing the FLW Tour event on Lake Cumberland. More than $10,000 worth of stolen gear was recovered.

Here is the full report from the Burnside Police Department:

On April 19, 2018 at approximately 1:25 p.m., Sgt. Mike Hill of the Burnside Police Department was notified by Fish and Wildlife Officer Jason Estes of a theft of fishing equipment that occurred on Burnside Island on April 16, 2018. Officer Estes stated that he had recovered some of the reported stolen property and had developed a suspect. Officer Estes requested my assistance, and we agreed to meet at the Burnside Police Department.

While Officer Estes was on his way to the Burnside Police Department, he observed the aforementioned suspect operating a motor vehicle on US Highway 27. Officer Estes activated his emergency equipment and the suspect failed to stop. At this time, Sgt. Mike Hill began to assist Officer Estes in the pursuit.

Mr. Weber granted consent to search his residence and officers located the reported stolen items. Officers also located two handguns at Mr. Weber’s residence, and he is a convicted felon. The recovered stolen items are valued at more than $10,000.00.

Sgt. Mike Hill of the Burnside Police Department arrested Mr. Weber and charged him with: Theft by Unlawful Taking Over $10,000.00, Fleeing and Evading Police 1st Degree, and two counts of Possession of a Handgun by a Convicted Felon. Mr. Weber was also served with four outstanding warrants. Mr. Weber was lodged in the Pulaski County Detention Center. Units were assisted during the investigation by the Somerset Police Department, Pulaski County Sheriff’s Office, Kentucky State Police, and 5th District Constable Mike Wallace. 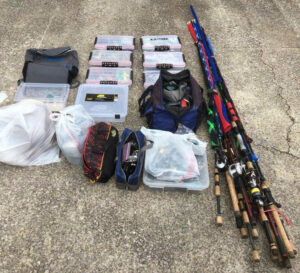 Jeff Gustafson posted the following on his Facebook page:

“Thanks to some relentless, hard work by Kentucky Department of Fish and Wildlife officer Jason Estes, his co-workers and the Burnside Police Department, most of the fishing gear that was taken from my truck was recovered today and the culprit is now in custody. I cannot thank everybody enough for sharing my story over the past couple days, it helped! The tight knit fishing community really is amazing!

“This in no way reflects Somerset or its people. It’s a great community that I look forward to visiting again someday! These stories don’t often have a happy ending, so I’m very grateful that this one does! THANK YOU to everyone who offered to help me. It’s incredible! We have some great people in the fishing world!

Great work by everyone involved. We have seen it take years to catch folks in theft rings where fishing tackle was being stolen at various lakes across the country. The fact that this suspect was caught in less than a week is such a great outcome for Jeff Gustafson who is headed to Smith Lake this weekend for the next FLW Tour event. 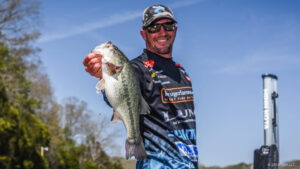