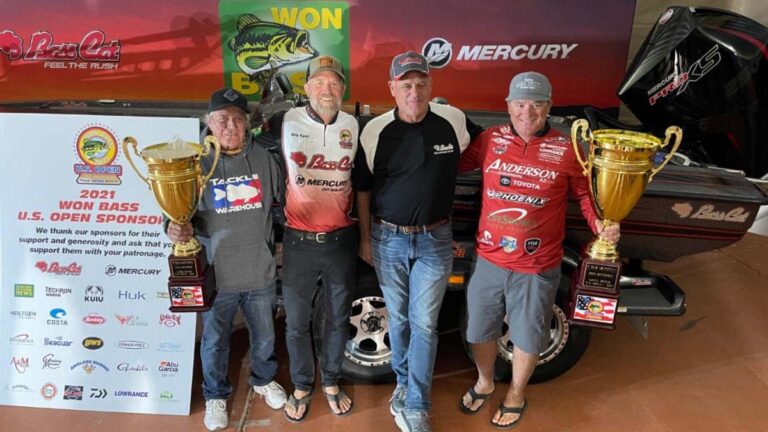 They say there is no substitute for experience. For Major League Fishing pro, Roy Hawk, the 2015 WON Bass U.S. Open Champion and veteran of many national events on the former FLW Tour, Bassmaster Elite Series and now the Bass Pro Tour, experience made all the difference on the final day of the 2021 edition of the West’s most prestigious bass tournament.

Starting the day in 12th place with a respectable 10.12 pounds, 1.69 pounds behind day one leader Rusty Salewske. Being a veteran of desert events, Hawk proved that consistency is key in the U.S. Open, as 11 pounds a day has historically given an angler a shot to win.

Hawk gave himself that opportunity when he plopped 11.62 pounds on the Callville Bay scales to bring his winning weight to a two-day total of 21.74 pounds. For his victory, Hawk received the keys to a 2021 Bass Cat Cougar FTD powered by a Mercury Pro XS 250 Four Stroke outboard valued at $64,000 and $83,000 in cash prizes.

Both days were tough fishing for Hawk, who spent his entire tournament fishing main lake areas near the Callville Bay – like when he won in 2015. “It was really tough fishing,” said Hawk. We only caught five keepers on the first day and six keepers on day two. We threw jigs and dropshot rigs on main lake points and just managed to scrape up enough to hold on.”

Hawk lassoed a 4.68-pound largemouth on day two that wound up being the big bass of the event. He caught he fish on a jig that his friend Chris Kinley hand makes. “We call it ‘My Jig’ and it really works well for me,” he said. “I put a Yamamoto Psycho Dad on there as a trailer, and that’s what she bit.”

Hawk said that he was very pleased with the outcome. “I’m super stoked to be standing here having won a second time,” he said. “I am just so thrilled to be here and be able to enjoy this with my wife and son, this is a real big deal for our family.”

Hawk outlasted Cliff King, who started the day in fifth place with 10.50 pounds. King produced another solid 10.53-pound limit to bring his total weigh to 21.03 pounds to finish in second place. He was followed in third by Gunnar Stanton with 20.47 pounds for two days, Tom White in fourth with 19.63 pounds and day one leader Salewske finished fifth with 19.53 pounds.

On the AAA side, day one leader David Shearrer who fished with Salewske on day one,drew out with Hawk on day two, and ran away with the AAA Division with 23.43 pounds. Shearrer said he had a great tournament. “I had a great time and drew two really good anglers who had really good days,” he said. “We caught schooling fish on day one, and fished deep on day two with Roy, I had a really good time and can’t believe this has happened.”