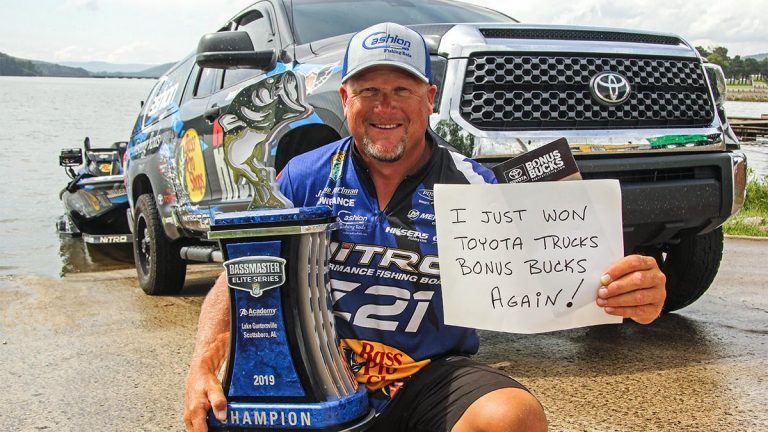 It wasn’t long ago that Upstate New York native Jamie “The Hammer” Hartman resigned his job as a truck driver, put all his belongings in storage, and hit the road in a Toyota Tundra with his bass boat in tow to chase his dream of being a full-time professional bass angler.

It’s safe to say, Hartman’s dreams are coming true. And in the past three months, he’s won $6,000 in Toyota Bonus Bucks, for top Bassmaster Elite Series finishes at both Lake Hartwell, and his victory on Lake Guntersville.

“I tell guys they’re crazy if they’re fishing tournaments and not towing with a Toyota,” says Hartman. “Not only are they missing out on the chance to win Bonus Bucks, but the reliability you get with a Toyota is absolutely awesome.”

Hartman should know. He’s now purchased three Tundras, and has spent a total of 226,000 miles towing his bass boat with them, and has zero complaints.

Hartman described his come from behind win at Guntersville as a huge shock. But the fact he cashed yet another Toyota Bonus Bucks checks is barely a surprise at all. He’s cashed checks in the majority of the B.A.S.S. events he’s competed in, and subsequently cashed several Bonus Bucks checks too.

However, you don’t have to be a pro like Jamie Hartman to cash in on Bonus Bucks. You just have to drive a 2015 or newer Toyota tow vehicle, sign up free for Bonus Bucks, and like Hartman, be the highest finishing registered participant in one of the dozens of local and regional tournaments supported by the program.