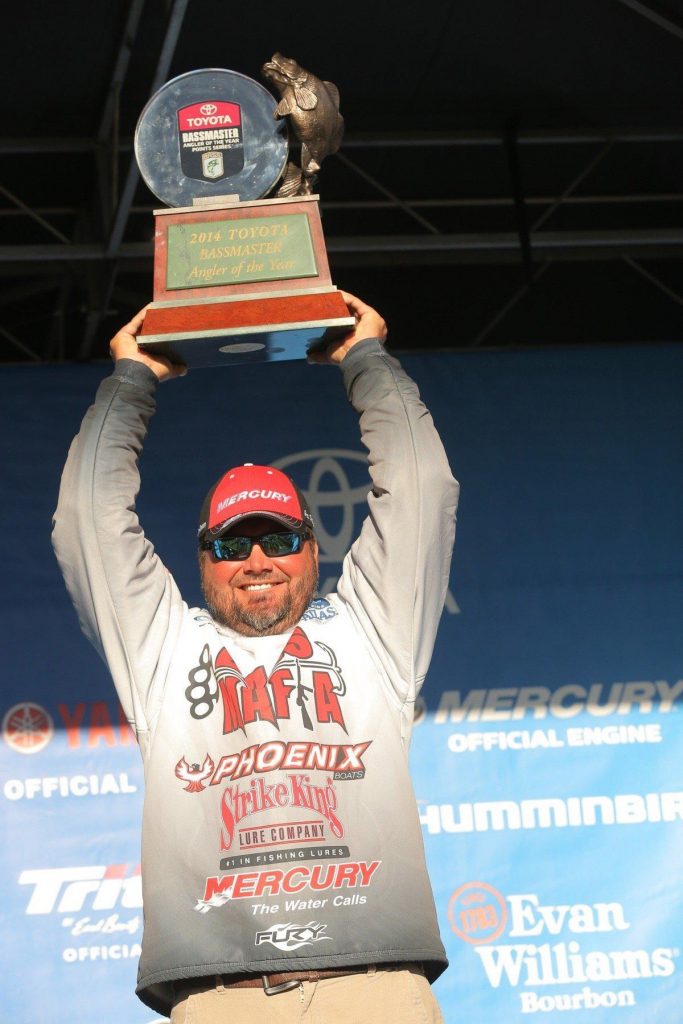 Louisiana’s Greg Hackney, 41, is the 2014 Toyota Bassmaster Angler of the Year (AOY). Over nine events, Hackney outpracticed, outstrategized, outfished and ultimately outlasted the other 107 Bassmaster Elite Series anglers who started the season.

Hackney finished 24th in the Toyota Bassmaster Angler of the Year Championship on Bays de Noc Monday after weather forced the postponement of the second (and final) round for three days. It was enough to lock up his first career AOY title.

Along with the sport’s most prestigious title and trophy, Hackney earns $100,000 as bass fishing’s best angler in 2014. The other 49 competitors earned shares of the rest of the $900,000 purse, based on their rankings in Angler of the Year points.

His season was solid right out of the gate. He finished a respectable 38th in the opener on Lake Seminole and followed it up with Top 16 finishes at the St. Johns River (16th), Table Rock Lake (third), Lake Dardanelle (third) and Cayuga Lake (first). His worst finish of the season was 48th at the Delaware River. He was the only angler in the series to earn a prize check (Top 50 finish) at every tournament.

Hackney entered the championship with a 15-point lead over defending AOY Aaron Martens and a 17-point margin over Todd Faircloth. Hackney knew that if he finished in the Top 15 at Bays de Noc, no one could catch him. Though he fell short of that mark, he was strong enough to hold off his challengers.

â€œI started thinking about Angler of the Year after the Lake Dardanelle tournament,â€ Hackney said. â€œI felt like I had a chance to do it. It didn’t change my approach to the tournaments, but it motivated me and made me fish harder.â€

This was not Hackney’s first brush with the AOY title. In 2004, he finished second to Gerald Swindle as a rookie, earning Bassmaster Rookie of the Year honors in the process. He was also fifth in 2005 and eighth in 2010. He is the first Louisiana resident to win AOY, and the fourth angler to claim AOY honors with both B.A.S.S. and FLW (along with Denny Brauer, Kevin VanDam and Jay Yelas). A Bassmaster Classic victory would make Hackney the first angler in history to complete the Grand Slam of professional bass fishing â€” winning both AOY titles, the FLW Forrest Wood Cup (which he won in 2009) and the Classic.

For the event, Jacob Powroznik took first place with two five-bass limits weighing 47-6. In addition to prize money earned for his rank in the Angler of the Year race, Powroznik won $500 and the Livingston Lures Leader Award which is given to the angler leading on the second day of the event.

Powroznik completed one of the greatest rookie seasons in B.A.S.S. history. Not only did he win the Rookie of the Year award, but he also became the first newcomer to the Elite Series to win two Elite events and the first angler of any classification to win two Elite tournaments in the same season since Skeet Reese in 2010.

Ironically, Reese came in second at this event with 46-2, and Mark Davis was third with 44-13. Brandon Lester and Mark Davis shared the Carhartt Big Bass Award with identical 6-4 smallmouths. Lester caught his on the first day; Davis on the second. For their lunkers, Lester and Davis share $1,000. A $500 bonus will be awarded to one or both if they were wearing Carhartt clothing.

As expected, Bays de Noc revealed itself to be one of the finest smallmouth bass fisheries in the world. Almost all of the competitors recorded five-bass limit catches in both rounds, and the average bass weighed 3 1/2 pounds.