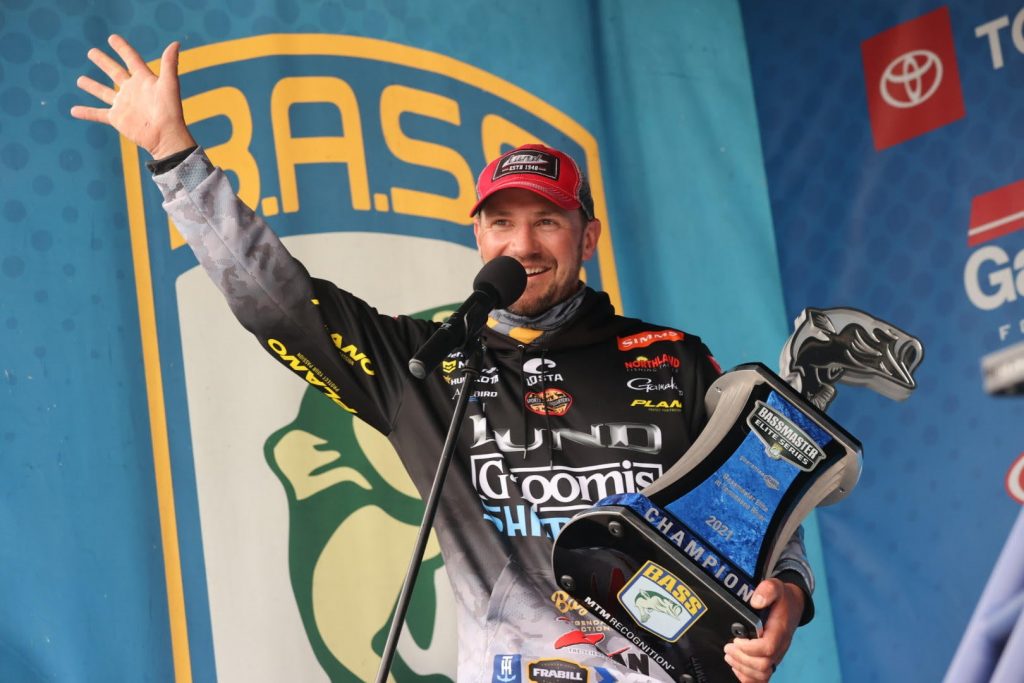 While check-in for the Guaranteed Rate Bassmaster Elite at Tennessee River was scheduled for 3 p.m. ET, Jeff Gustafson was waiting in the parking lot behind the World’s Fair Park Performance Lawn by 2.

With his limit of smallmouth filled and potentially treacherous waters ahead, the Keewatin, Ontario, native wanted to make sure he was back in plenty of time.

“I figured it would take a really big bag to catch me,” Gustafson said. “And being 40 miles down the river and with all the logs on the river, there was room for something to happen and I just wanted to get these fish in and get back here.”

Turns out, Gustafson could afford to quit early.

With a 14-pound, 3-ounce limit, the Canadian pro claimed his first career Bassmaster Elite Series victory with a four-day total of 63-0, just over 7 pounds ahead of second-place finisher Steve Kennedy.

With the coveted blue trophy in hand, Gustafson reflected on all of the people who’d helped him reach his lifelong dream of scoring an Elite Series win.

“My dad took me fishing every chance I wanted to go when I was a kid and I just caught the bug for it,” Gustafson said. “This is my whole life doing this stuff. It means everything to me. I think about a lot of people that I did it for, my family and I have a lot of good buddies at home that have the talent to do this and just have a different direction in their lives.

“They all really support me and send me messages all the time, good or bad. I can’t wait to show them all this trophy.”

In a tournament where largemouth played for most of the field, all 20 of Gustafson’s bass were smallmouth, something he didn’t expect heading into the event.

“In my experience on the Tennessee River lakes, if you catch a smallmouth it’s sort of a random fluke,” he said. “With the 18-inch size limit, I had no interest in trying to target smallmouth. I knew the fishing would be tough and it is crazy how it works out.

“Some of my good tournaments down here, I’ve had the worst practices. I caught a few in practice and had no idea what was really there until the tournament started.”

His magic spot was around the canal that connects Tellico Lake to Fort Loudoun Reservoir. With current pushing through the canal, Gustafson said the bass were hunkered down around hard bottom and rocks in 18 to 20 feet of water, so much so he couldn’t see them when he scanned the area with his 2D Humminbird sonar.

“There was a lot of bait and then you idle through there and put your Humminbird 360 down, you see all the rock down there and basically it was just a matter of figuring out where they were because they weren’t everywhere,” he said. “I thought it was fairly random, but as the tournament evolved, they were on specific spots. Just hard stuff on the bottom, rocks.

“I’m sure that these fish are hiding behind it. The water is cold. I feel like they don’t love being in the current right now.”

After trying a couple of different baits in the area, Gustafson settled on a Damiki rig, a 3/8-ounce jighead or a 1/2-ounce jighead with a smaller hook paired with a Z-Man ShadZ.

“The shad profile was key. I saw a lot of the fish puking up shad,” he said. “I wouldn’t mark any idling around or until I actually saw them come up to my bait. That was a big deal. The deal was keeping my bait under my transducer on the Ultrex.

“It was important to see it just so you could stay within that foot or two of the bottom, but not be on the bottom, and when the fish would come up to it, sometimes you would have to give it a little shake or lift it a little bit and that was sort of the trigger to bite.”

The weather changed in Knoxville every day and on Championship Sunday, fog delayed the by 90 minutes, giving Gustafson some anxiety.

“The fog thing this morning was fairly stressful. What I did learn over the last few days was the first hour was pretty critical. They are set up and biting better in the morning,” he said. “Before I got my boat in the water, I wasn’t that stressed and that got the anxiety going. Once we got out there and started fishing, I caught two good ones pretty quickly and it took the pressure off.”

Gustafson weeded through as many as 20 nonkeepers and caught his limit late in the morning. After double-checking to see if two of his bass measured over 18 inches, Gustafson made three final drifts before heading back to Knoxville.

Kennedy followed his 20-pound bag from Day 3 with 15-0 on Championship Sunday, claiming second-place with 55-15. The Auburn, Ala., native used a jig and a ChatterBait to catch his bass throughout the week, focusing on staging areas.

“I was dialed for about 25 to 30 minutes (today),” Kennedy said. “It was fun. I wish I had caught my bites. I broke off three this week. I think I could have done it. We would have been right there together.”

With a 14-9 bag of largemouth on the final day, Florida pro John Cox finished third with 52-10. With water falling out of his primary area, Cox fished a shallow bridge and did most of his damage with a Berkley Frittside crankbait.

“I felt my best chance of catching the 3 to 5-pound fish was on the Frittside,” Cox said. “I was getting so many bites. I probably caught at least 20 fish total. It was good. I landed on something kind of special.”