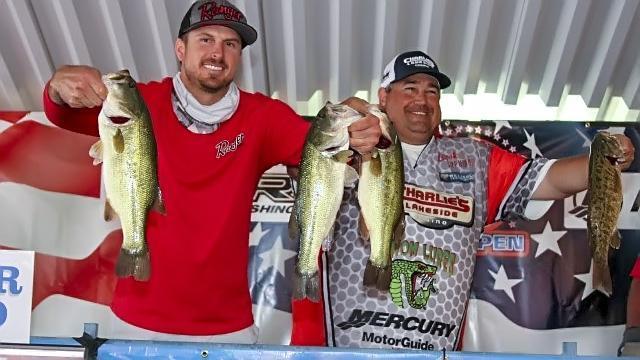 Ben Grande of Las Vegas took the day-two lead with a two-day total of 20.81 pounds, narrowly edging out Roy Hawk for the lead in the 2015 US Open on Lake Mead.

“There were a lot of boats in the area I fished yesterday, and I knew I couldn’t compete staying there, so I changed areas this morning,” he said. “I went to an area that I had caught a five pounder and a pair of heavy threes at in practice and ground it out all day. We caught our two biggest fish later in the day, and that helped us cull up to our weight.”

While he declined to state what he is doing exactly, he feels he has an ace up his sleeve; a fitting analogy for a resident of Sin City.

“I have a bait that I’m throwing that I’m pretty sure no one else is throwing, and the fish are responding to it. I know there are good fish in this area, and I feel like I can make things happen. It’s really a dream come true to be in this position, I’m hopeful things go my way tomorrow.”

Roy Hawk, no stranger to big time competition, has put himself in position to win by being consistent. The resident of Lake Havasu City, Ariz., finished the first day in third place with 10.68 pounds, and he followed that up with a 9.97-pound limit to bring his total weight to 20.65 pounds to move up a spot into second place.

“I am truly blessed to be here in position to win,” he said. “Things didn’t go quite as I had expected today as far as timing goes, I didn’t get my afternoon bite, but the morning bite was enough to keep me here, and I’m happy to be in contention.”

Mike Caruso of Peoria, Ariz., whose father Kevin started the tournament in second place, managed to reconnect with the fish they had found in practice, added 11.66 pounds to his 8.51 pounds from day one and ended the day in third with 20.17 pounds. Clayton Meyer, also from Las Vegas weighed 10.13 pounds to bring his total to 19.90 pounds, good enough for fourth place, while Wade Strelic of El Cajon, Calif. matched that daily weight, and finished the day in fifth with 19.46 pounds.

Grande’s day two AAA; Tyler Rempe from Sierra Vista, Ariz, helped the cause by catching a solid kicker, moved up into the lead his total weight of 20.25 pounds. The second place AAA was Sergio Arguello of North Hollywood, Calif. with 20.08 pounds. He was followed in third place by Oakdale, California’s Brandon Gaither with 19.97 pounds. Fourth place went to Mikey Reynolds of Overgaard, Ariz. with 19.56 pounds and fifth went to David Foreman of Queen Creek, Ariz. with 19.06 pounds.