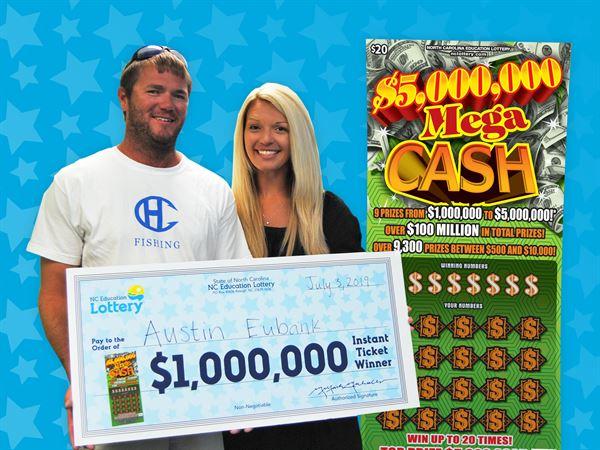 Austin Eubank and his wife, Margaret, of Wilmington will be celebrating July Fourth with a family fishing trip and a $1 million lottery prize.

“You see it happening,” said Eubank. “It’s fun to dream about, but you never expect it to you happen to you. This time it did.”

The captain of a sport fishing boat stopped to buy a drink at the Speedway on Carolina Beach Road in Wilmington, N.C. on Tuesday. Eubank, who doesn’t normally play the lottery, got to the register and “just had a lucky feeling,” leading to the purchase of a $5,000,000 Mega Cash ticket.

Not wanting to let the “lucky feeling” pass him by, he got in his car and started scratching. First row â€” no numbers match. Second row â€” one number matches. Thinking he had only won a few dollars â€“- he kept scratching. Then, when he scratched to reveal the prizes, he realized he had a $1 million lottery ticket in hand.

“He called and said, ‘Babe, where are you?'” said Margaret, who sells education software. “I could tell something was off from his voice. He told me, ‘I just walked into the gas station and bought a scratch-off.’ I was kind of annoyed at first because of course he won something. So I asked him how much, not expecting anything big. When he said, ‘I think a million.’ I couldn’t believe it. I was so excited!”

“We don’t really have any big plans,” said the father of one. “I think we are going to keep everything the same, but maybe just live a little more comfortably. We really don’t want to change a whole lot.”

His wife, however, had an idea.

“We will probably buy our 14-month-old son, Baylor, a new fishing pole,” said Margaret. “We are a family who loves to fish. That’s where we will be tomorrow for the holiday, on the boat fishing.”