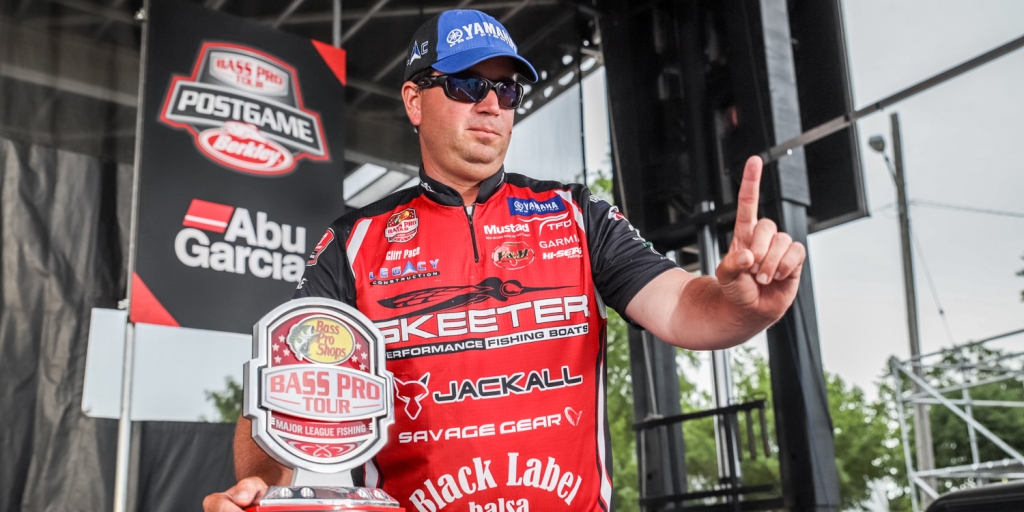 Out of all of the well-known bass factories that the Bass  Pro Tour visited this year, who would have guessed that Green Lake, Wisconsin, would be one of the top producers? It proved to be an excellent venue for the 2019 regular-season finale and Championship Round of the Evinrude Stage Eight Presented by Tracker Off Road.

That’s because the day was defined mostly by non-stop action on SCORETRACKER ®, except for the midday weather delay due to a strong band of rain, thunder, and lightning that covered the entirety of the nearly 8,000-acre lake.

Once fishing resumed, Cliff Pace took over and ran away with the title. Bobby Lane made a late charge, but in the end, Pace was the pace-setter, winning by over 12 pounds.

Pace Races Away With It

Pace grabbed the lead in the second period and never looked back. The windy and cloudy conditions played a significant role in his victory, and how he was able to catch 47 bass for 81-9.

The majority of Pace’s fish fell for a Jackall Rerange Jerkbait, but he started the day plucking them off with a Jackall Crosstail Shad fished on a drop-shot rig.

“After the delay, the wind was still blowing, and when we went back out, I caught one on the jerkbait on the first cast,” Pace said. “I never put it down after that. It was all about the conditions. I was looking for areas with rock since there was so much sand everywhere. The main thing on natural lakes is to find where there is a mix of rock and sand.” 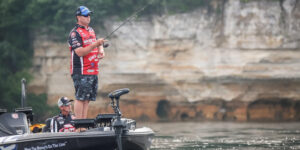 Once Pace got on a roll, he proved to be too far out of reach for Lane and the rest of the field.

“I just couldn’t keep pace with Cliff Pace today,” Lane admitted. “Every time I would get on a little roll, he would start catching them again. He was just too far ahead.”

Lane mixed in a jerkbait and drop-shot to finish a distant second. His key drop-shot baits were a Berkley PowerBait MaxScent 4-inch The General in black and green pumpkin.

Brent Ehrler started slow, but he rose toward the top of standings midday. Part of his ascension was thanks to quality smallmouths over 3 pounds at the start of Period 3.

“I got on one little deal with a jerkbait, topwater, Neko rig, drop-shot, and a spybait – it was all typical smallmouth stuff, I just didn’t have enough areas to do it,” said the California pro, who finished the Championship Round with 29 bass for 56-8. His catch included a smallmouth weighing 4-2.

With so many willing smallmouth biting, Ashley spent most of the day chasing brown bass before heading to the bank late in the day. He put on a largemouth clinic for those watching the MLF NOW! live stream.

Smallmouth have a reputation for vanishing in moments, and Ashley admitted that they’re not his favorite target species. But going into the day, he thought he needed them to have a chance.

“After the storms moved through there were hardly any boats on the lake and the rest of our guys were out chasing smallmouth,” said Ashley, who ended the day with 26 fish for 55-12. “I wish I would have gone for largemouth sooner because they were not as pressured.”

The Wheels Fell Off for Wheeler

Out of the 10 anglers fishing today, only Wheeler took the time for the four-hour ride around on Green Lake during the off day earlier this week.

Early on, it appeared that his homework was going to pay off as he came out of the gates swinging. After the first period, he had 11 bass for 27-14 including several nice smallmouth. At this point, he held a commanding seven-pound lead over Bobby Lane.

From there, the conditions changed, and he only mustered four bass the rest of the day. He continued to fall down the standings and finished up in sixth place with 15 bass for 35-14.

Shotgun Round daily awards were:

For the 30 anglers who qualified for the REDCREST, they are rewarded with a return trip to Wisconsin in August. The event will be held on the Mississippi River out of La Crosse on August 21-25.