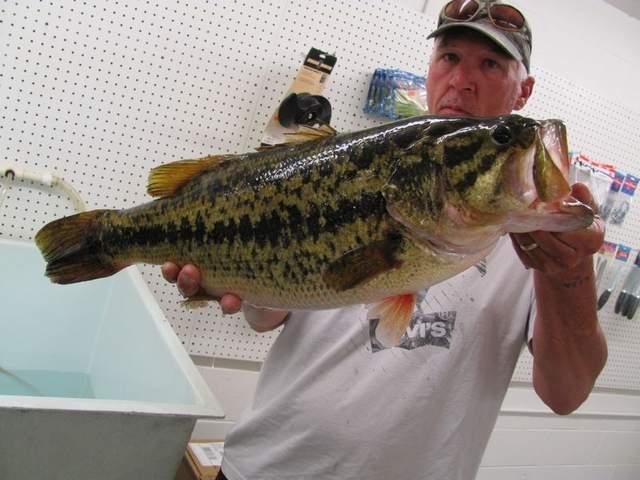 When James D. Hitchens of Georgetown set out yesterday for his favorite Sussex County fishing hole, he planned to catch largemouth bass, baiting his line with a live shiner minnow. However, he didn’t expect to set a new state record with the big bass that took his bait. “I’ve never had one over eight pounds,” Hitchens said. “So I was hoping for over eight pounds.”
Hitchens got his wish and then some when he reeled in a 10-pound, 10-ounce female largemouth measuring 26 inches long and 18 3/4 inches in girth, as measured at Taylored Tackle Shop in Seaford and verified by DNREC Fisheries biologists Nathan Rust and Jordan Zimmerman. During the certification process, the tackle shop kept the fish in an aerated tank, and after it was measured and verified, Hitchens released it, alive, back into the pond where he caught it. “I put her right back where she came from,” said Hitchens, a longtime Delaware angler. “I release all my big fish.”
Fisheries staff applauded Hitchens’ good sportsmanship in releasing his record catch. “We encourage catch and release fishing in Delaware, especially with larger fish like this one,” said Fisheries biologist Cathy Martin. “Not only will this fish be back out there for other anglers to enjoy, it should also see another spawning season to pass on its good genes to another generation of largemouth bass and thereby improve our bass stock.”
Division of Fish and Wildlife Fisheries staff monitor Delaware’s freshwater ponds and their fish populations, Martin said. Biologists have a variety of tools for managing fisheries: specialized regulations such as slot limits, stocking programs to bolster the population, removing specific size groups to reduce overcrowding and balance populations, habitat changes such as removal of invasive species, and supplementing food supply, for example, by stocking shiners. “Having healthy fish the size of the new record-holder largemouth bass in our ponds is a good indicator of the success of these management practices,” Martin added.
Since 1937, Delaware also has received funding from the federal Wildlife and Sportfish Restoration Program. Last year, the state Fisheries Section received about $3.5 million in federal matching funds to help support state fisheries restoration work, with Delaware fishing license fees supplying the match for the federal program.
“Later this year we will celebrate the 75th anniversary of this longstanding state and federal partnership, which is a great model for how to accomplish cost-effective resource management funded by those who directly benefit from the resource – the anglers. The general public benefits from this funding model and partnership as well,” said David Saveikis, Director of the Division of Fish and Wildlife. “Meanwhile, we also look forward to more signs of success from our Fisheries management practices.”

–Release courtesy of  Delaware Division of Fish and Wildlife