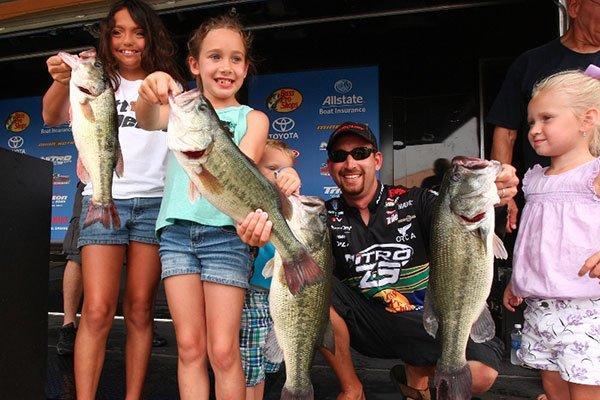 Consistency has put Ott DeFoe in position to win his first Bassmaster event on his home waters of Douglas Lake.

â€œEvery big tournament we’ve had here I have done well, but I have yet to win one,â€ said DeFoe, a Bassmaster Elite Series pro from Knoxville, Tenn. â€œI have made the Top 12 in every one of them, so I want to close the dang deal one time.

After catching a 19-pound, 3-ounce limit Thursday, DeFoe backed up that catch with a 19-1 bag Friday to take over the lead in the pro division of the Bass Pro Shops Northern Open presented by Allstate. â€œYesterday I said I was a little frustrated, although I was thankful for what I had. It was exactly the opposite today; I was so blessed,â€ said Defoe, who moved into the lead with 38-4.

The local pro has noticed the lake is fishing tougher than usual. â€œThe deep bite is the way to win here, but that’s not the way it should be,â€ DeFoe said. â€œThere should be a lot more fish out there, and there should be bigger bags caught. The lake is doing well, but it is not where it should be.â€

Since he is so familiar with the lake, DeFoe spent only about 10 hours practicing for the Open. â€œI really didn’t fish that much,â€ he said. â€œI just kind of rode around and looked at stuff just wanting to see the conditions. â€œ

Thursday he caught his fish early, but by 10 o’clock on Friday, he had a limit weighing about 11 pounds. DeFoe decided to try some spots he never touched the previous day, and the move paid off with his three biggest fish of the day.

Local angler Ricky Shepherd, of Mosheim, Tenn., moved into second place by catching the heaviest limit (20-10) of the day. â€œThese fish have changed on the lake this week because of the traffic, and they have positioned themselves to where they are easier for me to catch,â€ said the 52-year-old Shepherd who has a two-day total weight of 35-14. The warehouse manager said he threw a swimbait yesterday but changed his strategy today and hit about 25 spots to catch his hefty limit.

Fishing shallow helped Mandel Pettus of Sound Beach, N.Y., move into the lead in the co-angler division with a two-day total weight of 20-5. â€œI got to fish my strengths today,â€ said the 40-year-old Dick’s Sporting Goods employee. Pettus was paired with Day 1 leader Wilson, who had been catching fish deep on Thursday. The fishing pressure today caused Wilson and Pettus to move to the shallows where they caught three quality fish.