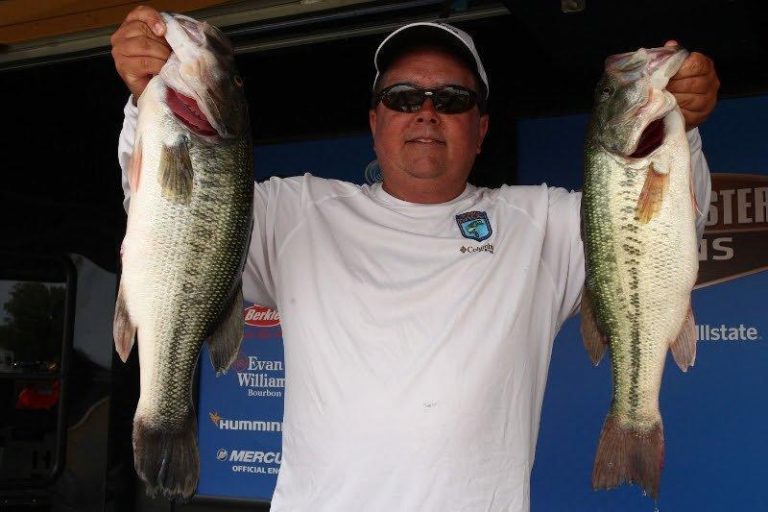 Dewayne Wilson put his custom-built rods to the ultimate test by catching a heavyweight limit and claiming the lead in the Bass Pro Shops Bassmaster Northern Open presented by Allstate at Douglas Lake.Willson, owner of Dixie Custom Rods, set the pace in the pro division with a 21-pound, 12-ounce limit of Douglas Lake largemouth. â€œIt worked out early for me, but after about  10 o’clock  I couldn’t get bit,â€ Wilson said. â€œLuckily, we caught them early.â€Competing in only his second Bassmaster event, the 47-year-old Wilson frequently fishes Douglas and knows several deep spots that hold fish this time of year. While practicing last week with his team-tournament partner, Wilson caught fish deep in several spots. â€œWe had a lot of places that had fish, but it seems like they are drying up,â€ he said.The La Follette, Tenn., angler caught his limit by about  7 a.m.  and then culled at least three keepers while fishing three areas. â€œThere were a lot of fish in the one spot and in the other two spots there were only a few fish, but they were bigger,â€ he said.He had the places to himself early, but other anglers moved into his area by midmorning, and the bite stopped for him. â€œIt got so bad I just let them have it,â€ said Wilson, who left the area to fish elsewhere.With the fishing pressure he encountered today, Wilson is unsure what to expect  Friday. â€œI might have 6 pounds, or I might have 20 again,â€ he said.Touring pros Brent Ehrler and Shin Fukae moved into a tie for second place as each caught a 20-12 limit. Ehrler said he caught bass throughout the day, but it was a grind for him. â€œI had only a flurry in the morning, and then it was just kind of scratching the rest of the day,â€ said the Redlands, Calif., pro. â€œI could tell the fish weren’t really set up right like they should be. I feel fortunate to catch what I caught.â€Despite starting in a late flight, Fukae got to his first spot and had it to himself. He boated a 6-9 largemouth on his first cast and two more quality fish on the next two casts. â€œI caught 17 pounds in about 30 minutes,â€ said Fukae, who fished about 25 spots the rest of the day.Rounding out the Top 5 in the pro division are Todd Schmitz of Goshen, Ind., fourth with 20-10; and Derrick Snavely of Rogersville, Tenn., fifth with 20-6.Madisonville, Tenn., angler Paul Palmer moved into the lead in the co-angler division with a three-fish limit weighing 11-12. The 41-year-old maintenance manager said he was catching fish in practice until about  10 a.m., but today he caught his keepers throughout the day.  â€œI changed up tactics a little bit and it worked out for me,â€ he said.