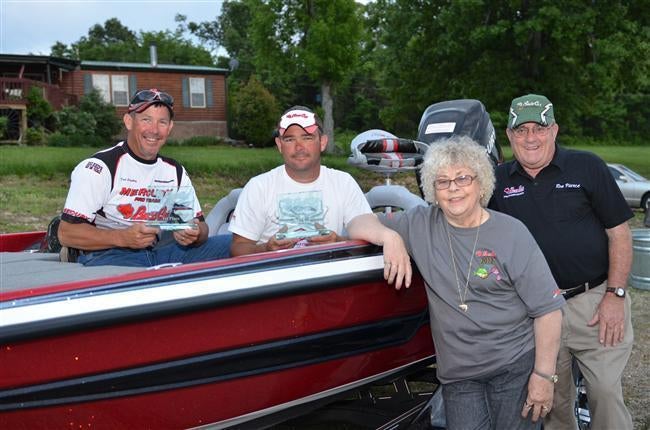 More than 377 teams descended on Mountain Home, Ark. and Norfork Lake for the 25th Bass Cat Owners Invitational bass fishing tournament. Most found the lake stingy thanks to rapidly changing conditions, cold fronts, falling water and more to deal with outside of the bass fishing and larger competition on the water.

But at least one team unlocked the code on the Northern Arkansas fishery. David Crisenberry of Flippin, Ark. and Gene Crisenberry of Harrison, Ark. bested the field with a total weight of 28.73 pounds. They took home a new 2012 Bass Cat Eyra rigged with a Mercury 250 ProXS OptiMax and MotorGuide Trolling Motor.

The Second place award of a new 2012 Bass Cat Margay went to the team of Brian Crecelius of Mountain Home, Ark. and Derrick Weatherford of Salesville, Ark. with a total weight of 25.91 pounds.

Overall big bass for the tournament weighed 5.37 pounds. It was brought to the scales by the winning team of Ben and Austin Goldberg of Lake Lotawana, Mo.

As part of this special 25th Invitational, one angler got a check for the largest Ozark Bass during this tournament. But he may get an even better prize as it appears Bass Cat Owner Randy Glenn of Springdale, Ark. was not only awarded $1,000, but he may go into the Freshwater Fishing Hall of Fame by breaking the old World Record with his 1-pound, 1-ounce Ozark Bass. Details will be released after official verification.

Big Walleye for the tournament was 3.92 pounds by Don Parkin and John Bowles of St. Louis, Mo. They took home $1,000 for the catch.

As a side “fun” pot, the largest Striper weighed in at 12.31 pounds by Robert and Zack Robbins of Branson, Mo. They also received $1,000 for their catch.

One â€œluckyâ€ Pink Duck was brought to weigh-in by Bradley Rey of Springdale, Ark. It was traded in for a new Mercury 115 ProXS OptiMax. Bradley was a lucky duck for sure.

Complete results can be found at: http://www.basscat.com/finalresults.pdf