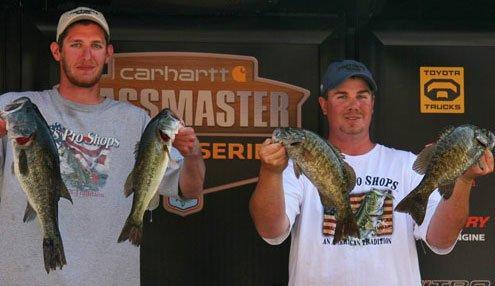 Radford University’s Justin Witten and Travis Cox developed a game plan for Smith Mountain Lake more than a month ago, and they executed that plan to perfection this weekend.

After seizing control Friday with more than 19 pounds, Witten and Cox backed it up with Saturday’s heaviest bag â€“ 15 pounds, 5 ounces â€“ and ran away with the Carhartt Bassmaster College East Super Regional on Smith Mountain Lake.

The victory earned Radford University a berth in the Carhartt Bassmaster College National Championship this summer in Little Rock, Ark.

â€œWe’ve had a plan for the past month,â€ Witten said. â€œWe came in agreeing that this was the strategy that could win it for us.â€

Their game plan relied on a combination of Witten’s sightfishing expertise and Cox’s swimbait proficiency. Seeking to put no less than 15 pounds per day in their livewell, Witten worked on spawning fish, most of which were smallmouth bass, and Cox concentrated on catching kicker largemouth with a big Rago swimbait.

The plan worked perfectly. They split their fishing day between main-lake points, where Cox worked with the swimbait from the back of the boat, and pockets with shallower water where Witten put his sunglasses to good use by sightfishing for bedding bass. Each day, the pair weighed three fish that Witten pulled off beds and two fish that Cox caught by casting the swimbait.

â€œThat was exactly how we planned it,â€ Cox said.

Condron and Bryant, who started the day in third place, moved up to second with 13-10, Saturday’s second-best bag, for a two-day total of 27-8.

â€œWe had loads of ground to make up,â€ Bryant said. â€œThe only way we would’ve been able to do it was to catch females instead of the males we were catching.â€

Virginia Tech’s Clay Ross and Nick Preskitt, who were second on Day 1, dropped to third after a â€œcatastrophicâ€ day. They had a limit for 10-9 but suffered from several miscues.

Ross and Preskitt failed to convert multiple opportunities, including two fish that shook loose and one that broke Preskitt’s line. But their worst mishap came when they dropped a 2 1/2-pound fish over the side of the boat as Ross attempted to weigh it with a grip scale.

â€œIt was like it had legs and ran out of the boat,â€ Ross said.

Tyler Faggert and Tyler Mayhew of North Carolina State finished fourth, weighing 11-7 Saturday for a cumulative weight of 24-4. They took Carhartt Big Bass honors for the tournament with Mayhew’s 5-6 kicker on Day One.

Radford’s Brett Meyn and Cole Campbell rounded out the Top 5 with 23-12.

â€œYou have no idea the number of soft plastics we went through on the first day,â€ Cox said.

During the extended periods of time while Witten worked on spawners, Cox alternated his time between casting the swimbait and assisting Witten as he presented multiple lures.

â€œWhen we’re in a tournament and there’s bed fishing, I just get out of the way and get the net ready,â€ Cox said. â€œA lot of times I was re-rigging for him while he’d pick up a different rod and throw something else at them.â€

Cox’s time to shine came when he picked up the giant swimbait around main-lake points. It produced two keepers each day, including the team’s two biggest fish.

The teamwork came natural for Witten and Cox, who’ve known each other since middle school. They’ve fished together in college bass tournaments for the past two years.

â€œWe’ve known each other for a long time,â€ Cox said. â€œI guess you could say we work well together.â€