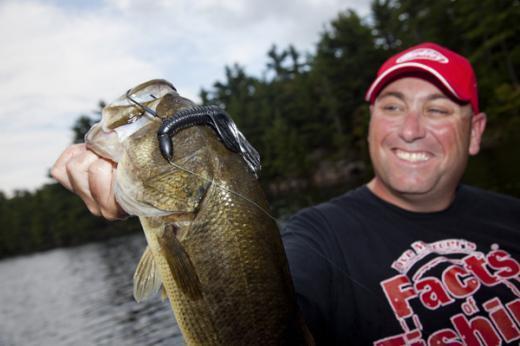 New emcee to make his debut: Dave Mercer claims that emceeing the Classic in the New Orleans Arena is the first job he’s ever studied for.

He was being modest. It’s a trait that, like his wide and constant smile, instantly endears him to anyone he meets. If he felt he needed to study for his new job, he didn’t need to study hard. A veteran of video and TV, he’s at ease in front of a camera. He loves to entertain people. He’s a quick draw on his store of angling knowledge.

A lot of that knowledge comes from his own tournament experience. As a kid he fished for largemouth bass in his home lake in Port Perry, near Toronto. At age 13 he entered a tournament and won $400. Hooked, he continued on that career path, including events on Lake Erie, where he learned about smallmouth fishing.

He was good enough as a competitor, but the entertainment side of fishing was where he decided he wanted to be. Facts of Fishing was born, or at least its first incarnation as a series of one-minute video tips. A TV show followed, also named Facts of Fishing.

To prep for the Classic, he said he researched past Classics and has talked with most of the qualifiers so he could get to know them. Last December, he did a show about redfishing on the Louisiana Delta, so he had been on the fishery recently. But as a refresher, he rode along with Gerald Swindle on Wednesday, the final practice session before the competition begins on Friday.

â€œIt helped me understand a little bit more about what the guys are dealing with here on the Delta,â€ he said.

That understanding is what he wants to share with fans.

â€œThe one thing I really hope I can bring to the table is to try to help show what these guys go through,â€ he said. â€œThat’s what makes the sport of fishing amazing â€” what they have to deal with, the decisions that they have to make. There’s no other sport like it.â€

Mercer will also be the emcee for Bassmaster Elite Series events. The 2011 season will begin in March.