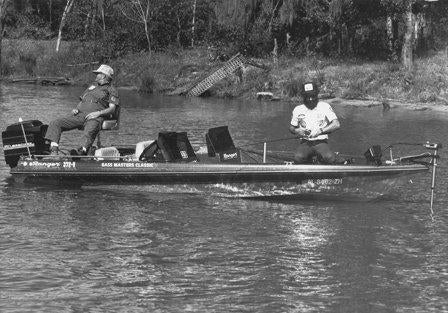 practice finally behind them, Bassmaster Classic anglers are bone-tired.

frigid air over the Louisiana Delta. In the nick of time, milder weather

is on its way.

â€œI think everyone’s happy, except for the fish â€” no, wait, maybe even the fish

are happy â€” about the coming warmer temperatures,â€ said Classic

qualifier Mark Davis. â€œThe cold has made it a brutal practice, for

The forecast heading into the Feb. 18-20 world championship calls

for progressively warmer air temps and some sunshine. The resulting

warming Delta water is expected to improve the bass bite. If the night

air in the 30s had hung around, the bite could

have been among the toughest in Classic history.

Davis, the 1995 Classic champ from Arkansas, said his weekend practice time was productive.
â€œI found a few fish,â€ he said. â€œGetting eight to 10 bites in a

day’s time, and knowing conditions are going to improve, is a

Besides the biting cold, anglers had to deal with the Delta’s

running aground when he zipped over shallow shell beds. He was a lot

luckier than some others, including Paul Elias.

by myself, but it was too dark by then to risk going up on plane. They

(rescue team) drove all the way down from Belle Chasse, put a boat in at

He said his savior was a Plaquemines Parish Sheriff’s Department

airboat, which pulled him to deeper water, where he could safely get in

under his own steam.

Like Davis, Elias likes the prospect of a better bite during

100-mile one-way run to spots in Venice, and the morning fog that could

â€œIf you plan to make a long run, a fog delay, or just the fact that

you have to run slower in fog, would cut into your fishing time,â€ he

said. â€œAs it is, you only get three hours to fish if you run to Venice.

Fog makes the run even more of a gamble.â€

The anglers are barred from the water Monday and Tuesday; it’s an

official practice day on Wednesday. Elias, the 1982 Classic champ and a

â€” said his Monday would be spent getting his motor checked out.

â€œAt least I have Wednesday to run the boat and make sure everything’s OK,â€ he said.
Davis said he would spend Monday cleaning his boat and organizing his tackle.
â€œClassic week is a busy week, and you have to make time to work on your tackle,â€ he said. â€œSo I’ll get all that done Monday.â€
Davis and Elias are two of the six former Classic champs who

qualified for the 2011 Classic. The others are three-time winner and

Iaconelli, who won in 2003 in the previous Classic on