We gravitate towards our favorite lures, regardless of the circumstances, almost willing the fish to bite our favorite baits even if thatâ€™s not the normal deal. Itâ€™s funny how anglers latch on to specific baits, especially when it comes to hardbaits like crankbaits.

Anyone who has fished a while has amassed a good collection of crankbaits, and if youâ€™re like us, you have several of the same color and sizes of your favorites.

Did you know that not all crankbaits are the same? They may be created exactly the same, but for some reason, and we have yet to explain it perfectly, there are certain crankbaits in a stock of similar crankbaits that just produce better than others. Perhaps itâ€™s a confidence thing among us as anglers, as confidence can yield more catches just because youâ€™ll anticipate and make yourself stay disciplined longer than you would with a bait in which you have no confidence.

I recently heard a pro was fed up with the craziness in tournament fishing and decided to sell all his tackle. One of his pro angler buddies called him up and asked if he could go through his tackle box and look for just the â€œchewedâ€ crankbaits and buy those off him. The angler refused to part with those crankbaits even though he was getting out of the game so to speak.

David Dudley has a single crankbait that has produced more than $250,000 in winnings. He doesnâ€™t practice with the bait as itâ€™s too valuable to come out anytime but in the tournament because he knows if he gets it around some bass hitting crankbaits, they will eat this one.

Iâ€™ve been testing a lot of crankbaits and have latched on pretty hard to one. Itâ€™s a Strike King 6XD in Gizzard Shad. It’s caught more than 100 bass since May.

In this photo you can see some hook rash but all around that you can see little sandpaper-like striations. Those are from the teeth of bass gnawing on the sides of it while in their mouth; same thing appears on the back of the crankbait and on its eye. Compared to exactly the same crankbait out of the package, my confidence starts to dwindle. The baits are just alike, only Iâ€™m going to reach for that scratched up, gnawed up bait first every time.

Should I lose that bait, youâ€™re probably going to have to give me a moment of silence to mourn.

Weâ€™ve talked to David Fritts and David â€œSmileyâ€ Wright before about finding gems of crankbaits, arguably the two most well known deep crankers in the southeast if not the entire U.S. Iâ€™ve heard stories of cinder blocks being sunk at specific locations to mark diving depths of crankbaits out of the box. Sometimes sitting with hundreds of crankbaits, they will cast and cull the perfect wobbling, deflecting, accurately diving baits into a tournament, fish-producing box of cranks. Really there is not a thing wrong with the other crankbaits but they’ve determined how a bait should feel and what it should touch and if they don’t get that the put that bait aside.

Why do they do that if all crankbaits are made the same?   They are to an extent. But the imperfections and tuning of baits, swapping of hooks, a little too much clear coat, a rattle or casting weight that is lodged or dislodged can make a bait act and sound complete different from its twin brother.

What does that all mean to us as anglers? Itâ€™s a lesson in being mindful. If youâ€™ve got a bait that behaves just a bit differently than the hundred other crankbaits like it that the bass are seeing on a pressured lake, chances are you might be on to something. Iâ€™ve known guys to pick up silent crankbaits at a tackle shop and shake the packages, listening for just a little bit different sound.

When you find a bait that is really producing, you need to cull it, mark it and guard it. I fished with several good crankbait anglers who use magic marker and number their baits to keep up with the ones that really produce and the ones that have been lake proven and super-tuned yet.

Come tournament day, you need a proven producer in your hands.   Iâ€™ve also been fortunate to find a pile of baits that produce well. I keep them separate from others. Itâ€™s very possible to find a whole bunch of baits that produce together, but Iâ€™m always looking for a slight edge on the fish. It always seems the more beat up my crankbait gets, the better I catch them.

One factor to mind is lip strength. Grinding a crankbait into hard bottoms, which is often the case when cranking, can cause the lip to flex and stress cracks to form not to mention it can roughen the edge making it susceptible to line nicks and altered swimming action. I often smooth my lips back down with light sand paper to keep the bait from scarring my line and running the risk of losing the crank.

So if you can afford to buy crankbaits, buy a few. Chances are one is going to work a little better than the rest. But chances might also be that a whole pile of baits will work just as well if you’ve established their productivity with just one.

What are your thoughts on favorite crankbaits? Do you think one crankbait produces   better than another of the same make and model? 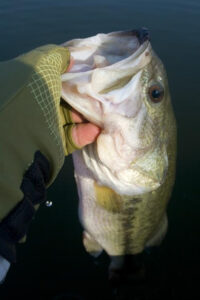