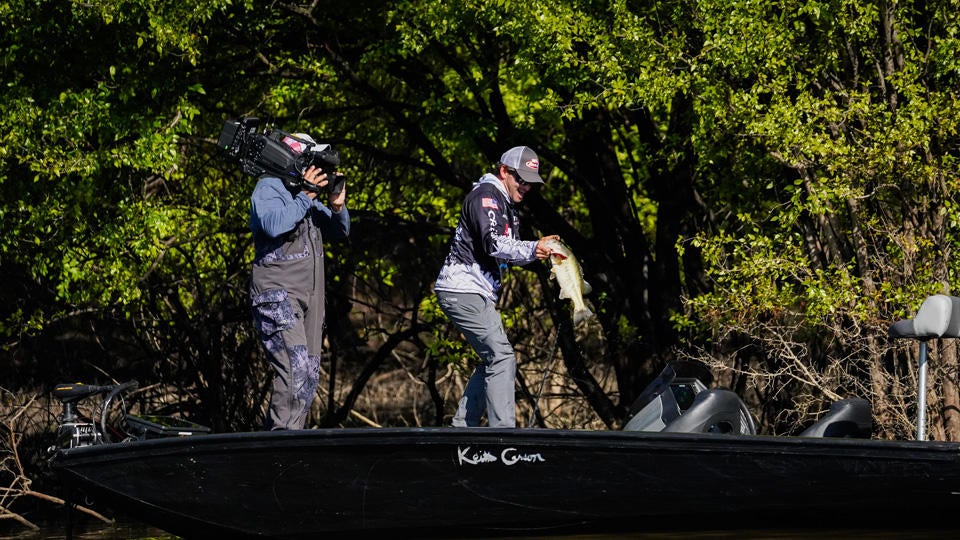 Keith Carson started the event with 25-pounds on day one, followed that up with 22-pounds, 4-ounces on day two, and brought 20-pounds, 6-ounces to the scale on Showdown Saturday. His 3-day total of 67-pounds, 10-ounces gives Carson his first NPFL win and he did it in dominant fashion.

Carson employed a run and gun pattern this week on Wright Patman after scrapping his entire practice early on day one. With the water falling, Carson reverted to pure instinct and never looked back. The Debary, Florida pro rotated through a Texas rig and Chatterbait all week to catch his fish and the final day once again proves how dialed in Carson was.

“This morning, I has no idea where I was going to start. I had been starting on new water every day and on different parts of the creek. Today, the wind changed and blew out of the North West. I pulled up on a wind-blown bank. I had not fished here all week but I was feeling it.”

On his first two casts, his Abu Garcia rod loaded up but the fish got off. Ten casts later, another bite and another lost fish. Carson believed the fish were not bass, but picked up a flipping bait to keep it honest.

“I flipped that bait in and bam. I caught a 4-pounder and realized they were bass. That was the only fish I could get off that point. I went flipping and was getting bites every fifteen minutes but they were all small. I caught another 4.5 around 9am, and at that point I started to feel good.”

Two hours later, Carson had no bites and another instinct decision lead him back to the chatterbait and those wind-blown points.

“I went by a bush I have been fishing all week and it was all dry. I knew I had to make a move. I put that chatterbait in my hand with the Berkley Meaty Chunk trailer and basically caught all my weight that way. I only hooked about 50% of the fish I had bite for whatever reason but it didn’t matter.”

“I was flipping a 1-ounce tungsten all week. I said differently earlier in the week because I didn’t want that to get out. That weight allowed me to fly around and get that bait anywhere I wanted quickly. I was able to cover way more water while still fishing thoroughly.”

Nick Prvonozac once again finds himself at the top of the leaderboard in NPFL competition. The Warren, Ohio pro tallied 58-pounds, 4-ounces of Wright Patman bass anchored by his 23-pound day one. Jumping one spot from 3rd place, Prvonozac’s 16-pound, 6-ounce effort on day three landed him in 2nd place this week.

“On the first two days, I caught fish steadily but they were the right quality. Today, I started in an area that I had not hit since day one. The water had fallen so much and I never got settled in. I moved around and made it to an area I was catching some smaller fish before, missed a big one and caught a small keeper.”

Prvonozac made a move to where he ended day two and caught the rest of his weight. The final day was a lot slower for the Ohio angler but his 3-day total put him a pound ahead of the next closest competitor.

“That area I ended on today was special. It has a bit cleaner water and lots of isolated cover off the bank â€“ that was the key. I flipped a Yum Wooly Bug all week paired with a 5/16th weight.

Texarkana’s own, Michael Yoder yielded a 20-pound bag on the final day to give him a 3-day total of 55-pounds, 12-ounces and a cool 4th place finish on Wright Patman. With more experience than any other competitor, Yoder has a decision to make this week and he executed it flawlessly, almost.

“My simple game plan this week was to keep a bait wet in the area with the biggest population on the lake. All those fish were in a certain section of the lake and with the falling water and muddy water, that cut off 40% of the lake.”

Yoder knew he could go for gold, or semi play it safe. Avoiding the hero or zero, Yoder grinded all week and kept a 6th Sense bait in his hand and flipped his way to what he calls a blessing of a week.

“I could have easily won, or easily lost. I am very fortunate and blessed to have the type of event I has. The lake was fishing hard and I am thrilled with a top 10. The one thing I wish I could do over would be to spend more time in the main lake in practice.”

Yoder gambled and spent too much time in the river, trying to force a bite that was dying. With more time in the main lake, and an executed big bite, things could have been different.

“I have caught and weighed about 27 bass over ten pounds on this lake. On day two, I lost one that was between 8.5 and 10-pounds. That fish would have culled a small fish and I knew right then my shot to win was gone.”

Yoder credits 6th Sense baits for his week, flipping a Stroker Craw and Prawn soft plastic to catch most of his fish. He mixed in a little chatterbait and a little frog and wanted to thank Garmin Electronics and Jones Trolling Motor as well.

Cody Ryan Greaney rallied on two 20-pounds bags the last 2 days to jump inside the top 5 with a total weight of 55-pounds, 10-ounces. Starting the day in the 16th spot, the Texas pro jumped to 5th place riding a bite he found on day two.

“I basically scratched my practice after day one. There were so many people where I wanted to fish, I couldn’t get into a groove. I should have had over 20-pounds on day one also but everyone was losing them so it definitely happens fishing around bushes.

Getting away from other anglers, Greaney went junk fishing, rotating between 8 or 10 rods and just started plucking them off one at a time. Fishing what looked good, a key timeframe was when things started to click.

“I had a magic hour; I could call my shots on the main lake. I was fishing windblown points with a spinnerbait and ended up catching a giant.”

On the final day, the weather threw another curve ball. Going back to the points, Greaney noticed the water has changed and two small bites has him looking to make moves.

“I stopped on a shad spawn deal and caught a good one. I happened to look over and noticed my best flipping stretch had nobody on t and I went right there.”

The rest is history as Greaney caught 20-pounds, 5-ounces to end his event.

“I want to thank my family and my lord and savior. He allowed us all to fish this week and kept us safe. My sponsors, Keystone Bank and Kids Outdoor Zone, I couldn’t do any of this without them.”

Shawn Murphy made the biggest jump on the final day going from 19th after two days to the 6th place spot with a 20-pound, 14-ounce bag on day three. His 3-day total of 55-pounds, 6-ounces came by fishing high pressure areas and working a different presentation behind the “flippers.”

“I caught my fish by fishing behind anglers and getting baits way back up into the bushes. I swapped between a ½-ounce spinnerbait and a ½-ounce Buckeye Lures swim jig, both black and blue color.”

The Nicholasville, Kentucky pro stayed in one creek all week but scrambled on the final day and ran new after away from other anglers.

“At 11:30 am, I had 11-pounds or so and made a move across the lake and found them on mud banks with single laydown trees. I caught all my weight on those trees. Big thanks to Kentucky Sonar, Day’s Boat Sales, Mercury, Lowrance, and Power Pole.”

Josh Ray relied on strong days one and two to go with his 14-pound, 6-ounce limit today. With a 3-day total of 55-pounds, 2-ounce, the Alexander, Arkansas pro ended his event in 7th place.

Eddie Carper tallied increasing bags all three days to finish in 8th place. Moving from the 17th spot, Carper brought 19-pounds, 13-ounces to the scales and ended with a 3-day total of 54-pounds, 14 ounces.

“I didn’t make any changes this week. I stuck to my guns and flipped bushes with a green pumpkin Zoom Brush Hog and 5/16th ounce Woo Tungsten. I flipped 25-pound Seaguar fluorocarbon and my Kistler rods got them out of the thick stuff. The only thing that changed was the win and it made the water dirtier than it was.”

Missing some small fish on the final day, Carper landed a key bass early on to get him in a groove.

“I flipped a root wad and saw a fish flash. I dropped down and let her eat it good. I set the hook and went to boat flip it. Little did I know but she was over 6 and it bounced off the rub rail and back into the drink. Thankfully I was able to get her in the boat.”

The Valliant, Oklahoma pro had one big bass and 3 rats for the longest time and about noon time landed a 4-pounder to help his bag. He kept moving on points and caught another big one.

“That 5-pounder was about it. I had one small fish I couldn’t get rid of but I want to thank Rugged Products for sending us to Texarkana with a pile of stuff to give away to the anglers and fans. They make a variety of things, sun block, bug spray, skin care products and it is all natural.”

Texas angler Marc Schilling brought 19-pounds, 14-ounces to the scale on the final day to give him a 3-day total of 54-pounds, 1-ounce. Too many lost fish cost him a chance for the win on day two, but several key changes lead to a top 10 finish here at Wright Patman.

“Today I began by getting two 4-pounders on a spinnerbait and then I swapped to the spinning rod. I landed three of the six 5-pound bites I got on the Senko and that was basically the day.”

The first day, Schilling got his fish flipping and day two saw the spinnerbait get the most action. Looking for fish in spawning coves, the Texas pro just kept moving.

“There were too many guys in my areas and I just fished a lot of new water. I want to thank my sponsors, SEI Roofing, Mercury, Up River Rod Sleeves, Power Pole, Sartin Marine, South Western Parts and Service, and of course, my lovely girlfriend.” 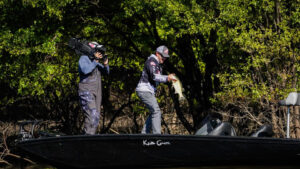