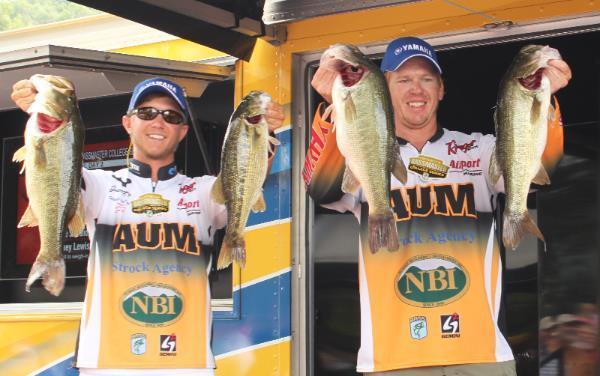 Tom Frink has got a secret, and he unleashed it on the field at the Carhartt Bassmaster College Series National Championship today en route to amassing an eye-popping 20-pound, 15-ounce five-fish limit with partner Jacob Nummy. His secret is in the form of the bait, and he might be the only angler in north Georgia who has one.

Frink kept his secret lure close to his vest, but will reveal it after the conclusion of the event tomorrow, after the Top 5 teams have weighed in. Frink and Nummy, both seniors at Auburn University at Montgomery, currently are enjoying a 3-pound, 2-ounce lead with a two-day total of 31-3.

The pair started with an early flurry of spotted bass caught on drop shot rigs, but each fish they put in the well was a candidate for culling, as Frink and Nummy saw it. They hadn’t let their secret bait out yet.

â€œIt was nice having some OK spots first thing, but they weren’t anything that would help us get into the Top 5,â€ Frink said. â€œIt helped us to get comfortable, but then we went fishing for largemouth, and it became a bit of a grind in the afternoon.â€

Frink’s bait was so much the key to their day that Nummy flipped to downed trees from the back of the boat as the pair passed them, allowing Frink room to sling his bait.

â€œIt was mainly me getting out of his way so he could put that bait in the right spot,â€ Nummy said. â€œI think me just hanging back and letting him do his thing with that bait is what helped us a lot.â€

With conditions changing as fast as they did today, the duo feels like they may have to learn Chatuge all over again tomorrow. Seldom have the days been the same on Chatuge since they began practice seven days ago.

â€œI’d like to say tomorrow that we can do it again, but on this lake there really aren’t any givens. You’ve got to go out there and start casting to get a feel for what’s going on,â€ Frink said. â€œIt could be big largemouth again, or it could be spots.â€

â€œWe’ve got a bunch of holes to hit, but if the heads (big largemouth) aren’t there, that might be a problem. To win it, we’re gonna need heads,â€ Nummy said.

Surging into second place after Day 2 is the Auburn team of Jordan Lee and Shane Powell. They sacked 14-12 today for a total of 28-1.

â€œWe struggled early on in the day, but the afternoon bite turned on for us,â€ Lee said.

Powell said that timing was key for them.

â€œWe went back to two or three of our best spots and started catching them,â€ Powell said. â€œWe had hit them two or three times earlier in the day, and they weren’t there, but at the end of the day they started biting for whatever reason. Then, at our very last stop, they started schooling right at the boat, and we caught two more doing that. That last hour the whole lake turned on, and we culled three or four of our fish.

â€œIt’d be awesome to make it to that bracket (to determine which collegiate angler will fish in the 2014 Bassmaster Classic) because I’m with (2013 Carhartt Bassmaster College Series champion) Matt (Lee) a lot, and I’ve seen what it’s done for him and his family. We’re pretty excited to have this chance.â€

In third place are Day 1 leaders Nick Barr and Jarred Walker of Eastern Washington University, who only managed 6-0 today, but had staying power thanks to the strength of their Day 1 bag of 19-4. The pair had to contend with increased boat traffic due to their success. Plenty of anglers saw where Barr and Walker were fishing and used the same spots today.

â€œWe went to hit our first spot, and there was a boat on it. There were boats on our five best spots today when we got there,â€ Barr said. â€œThese fish are smart. If you’re not the first boat there to drop on ’em, you won’t get bit. We watched big fish all day just sit there and ignore our bait.â€

In fourth place are the local favorites of Matthew Peeler and Brad Rutherford of Young Harris College with 23-15, and in fifth place is the other Auburn University team, made up of Matt Lee and Chris Seals with 22-14.

Only these Top 5 teams will compete tomorrow to determine which Top 4 teams will go on to the Carhartt Bassmaster College Bracket Championship, where the winner will earn a berth in the 2014 Bassmaster Classic set to be held next February on Alabama’s Lake Guntersville.