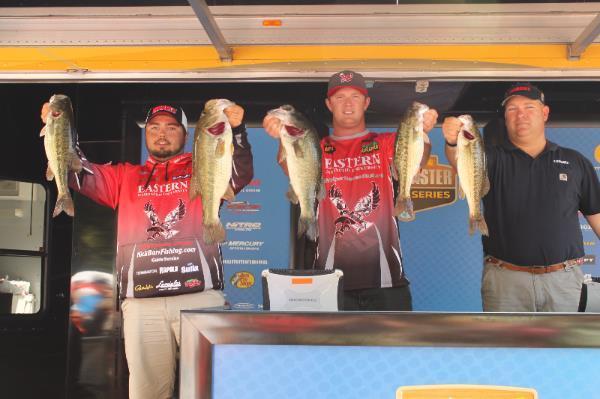 For Barr and Walker, however, the day in Georgia might as well have been a day on their home lake, Potholes Reservoir.

â€œBeing from Washington state, Chatuge lays out a lot like my home lake does. It plays a lot to our strengths â€” finesse fishing,â€ Barr, a senior, said. â€œI heard that the lake was clear, but when I looked, I could only see 4 feet deep, and that’s dingy for Washington. We can see 20 feet usually. But still, this is the closest thing you guys have got on the East Coast that’s like home.â€

Barr, who has served as a smallmouth guide in Washington for the past three years, said the biggest factor in their success today was patience.

â€œA lot of guys were fishing too fast. Even though they were throwing a drop shot or something, they’d flip it out, then reel it back up a few seconds later. That’s too fast,â€ he said. â€œWe caught fish in areas where we shared water with other guys by working super slow.â€

â€œIt’s a soft plastic, so the less you move that bait, the more natural it’s going to look,â€ Walker added.

Though they fished slowly, they hurriedly rotated among several spots they had located in practice.

â€œWe didn’t have time to come down here and plant brushpiles like some guys did or Side Image (study through their electronics) the whole lake, we had to get here and get to it right away, so we got here and got to work, and it’s paying off so far,â€ Barr said.

Barr and Walker are currently enjoying a 5 pound, 10 ounce lead over the University of Louisiana at Monroe’s Nick LaDart and Brian Eaton, who sit in second with 13-14.

â€œMe and Nick are in unfamiliar territory,â€ Eaton said. â€œThis is the first time I’ve ever fished a drop shot rig in my life. It’s the same for him. I’m not used to fishing with 8-pound-test line, so this is way different than Louisiana.

â€œWe spent the whole practice graphing brushpiles and found a bunch we liked and would hit ’em, and if they were there in three or four casts, great. If not, we moved on. I guess since we’ve never fished like this before a little bit of luck helped, too.â€

In third are local favorites, Young Harris’ Brad Rutherford and Matthew Peeler. The duo is more familiar with Chatuge than any other team and refuse to let a 6-plus-pound deficit sway their courage.

â€œIt’s not good out there right now by any means, so you’ve got to slow down and stay persistent. The big ones are there, and the ticket to catching them is to stay cool, calm and patient the whole day, and you can slowly upgrade to a good bag,â€ 22-year-old Peeler said. â€œWe’re not worried at all right now. We’re right where we want to be.

â€œYou absolutely cannot win a tournament on the first day, but you can definitely lose one. Our goal was to go out there and do what we do, and we’re in a good position right now. It was a good feeling to get out there and execute, especially since there’s a big â€˜X’ on our back. We’ve just got to keep it up and see what happens.â€

Rounding out the Top 5 are, in fourth, Alex Pisarski and Justin Gangel of Cal State Long Beach with 13-6; and in fifth, Jordan Lee and Shane Powell of Auburn University.