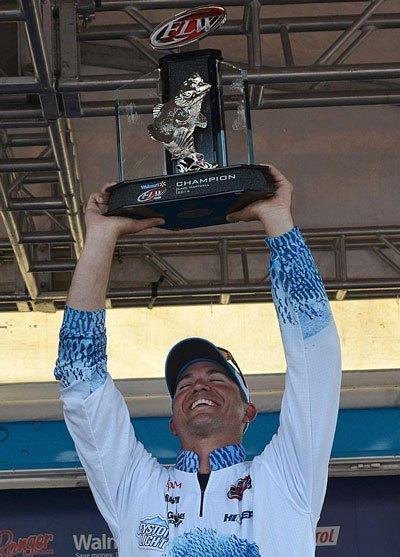 Pro angler Casey Ashley of Donalds, S.C., brought the largest stringer to the scale on Sunday – for the third time in four days of competition – to win the Walmart FLW Tour at Lake Hartwell presented by Ranger Boats. Ashley weighed in a five-bass limit worth 15 pounds, 10 ounces to win the $100,000 prize after leading wire-to-wire in the four-day event that showcased 176 of the best bass-fishing professionals in the world.

“This week has been magical,” said Ashley, who earned the first Walmart FLW Tour victory of his career. “I’m not taking away from any major tournament that I’ve won, but it really means a lot to win at home. When you win at home, everybody you know is here. A lot of times my family gets to travel to my closer tournaments, but at home everybody gets to be there. A lot of them were out on the water watching me. I think the whole town of Donalds is here. It’s just an awesome feeling.”

Ashley said that he concentrated his efforts this week fishing the lower end of Lake Hartwell in the clear water. He targeted deep brush piles from 25 to 40 feet deep.

“A lot of the stuff that I was fishing was natural brush,” Ashley said. “I knew that would hold up well despite the screwy weather going into this tournament and I felt like that would be the only way that you can win. Every move that I made this week was the right one.”

Ashley said that he caught all of his fish this week throwing a green pumpkin-colored ½-ounce Shooter Lures hand-tied jig trailered with a Zoom Super Chunk Jr. and a shaky-head rig with a watermelon candy- or gourd green-colored Zoom Finesse Worm.

“I caught around 10 fish today,” Ashley continued. “I didn’t catch many because I was running some new stuff trying to catch big fish. I ended up catching my 4-pounder where I’d been fishing all week. When I got the big one, I knew it was game over.”

David Redington of Sulphur Springs, Texas, won the co-angler division and $25,000 Saturday with a three-day total of 10 bass weighing 31 pounds, 8 ounces, followed by Todd Lee of Jasper, Ala., in second place with 13 bass weighing 30 pounds, 15 ounces worth $7,500.