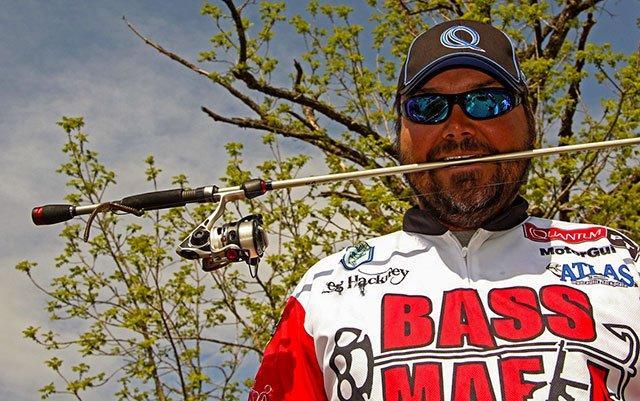 One hundred pros came to Bull Shoals, fifty of them are leaving with a paycheck. The difference between empty handed, and at least $10,000, was adaptation. Adapt or fail. The confidence and willingness to change with changing water conditions and bass behavior is the ultimate separator between tournament success and disappointment.

Air temperatures dropped 30 degrees in one day. Cold rainwater flowed into the reservoir off the Ozark hills. Water temperatures started in the 60s, dropped dramatically, and then rose again. Clean water turned dirty. Bass were in various phases of the spawn. And the lake level rose three feet between practice and the second day of competition.

Few anglers in the history of the sport have made a better living by adapting to changes than Kevin VanDam, Greg Hackney and Mike Iaconelli. All of them hauled home a paycheck from the Ozark Mountain reservoir that was metamorphosing like a butterfly. Hopefully, illustrations of how they changed and succeeded will make you a better angler.

Greg Hackney is a power angler by trade, whose beard seems well matched to the lumber like 7′ 11â€ flipping stick and logging chain worthy braided line he feels most confident with. That’s how he started practice. â€œAt 11:00 a.m. on the second day of practice, I finally picked up an EXO spinning reel and a shaky head, and immediately, I had a dozen bites,â€ said Hackney. â€œObviously, at that point I knew I needed to change from power fishing to finesse.â€

â€œI actually went back to power fishing for a while in practice, but I knew the shaky head was really what I needed to do. Honestly it felt good to catch â€˜em with a spinning reel. It was reassurance that I’m not too one dimensional, and that I’m as versatile as you gotta be to do well out here,â€ said Hackney. â€œI could have tried to force the flippin’ bite, and if I would have, I’d already be on my way home to Gonzales,â€ he concluded. Instead, he collects a Top 12 paycheck.

Like Hackney, Mike Iaconelli knew when to put down the baitcaster and turn to spinning. â€œI caught â€˜em the first day with a spinnerbait when the wind blew so hard. Then the second day, the wind stopped, and it just killed the spinnerbait bite. So I picked up a spinning rod and a shaky head and ran to brand new water,â€ said Iaconelli.

Brand new water â€“ there’s the difference maker. $100,000 on the line, and instead of dying like the wind, Ike had the guts to make a drastic change right in the middle of competition. â€œYou’ve got to work hard to feel the pulse of the fish,â€ said Ike. â€œThese fish are moving, and on the second day I was able to catch them with a shaky head and light line near the bank where they were wanting to spawn. The spinnerbait was a non-factor the second day.â€

â€œI totally left the areas I practiced once the tournament started,â€ said Kevin VanDam. Be honest, how many of you reading this story, totally abandon what you worked so hard to find in practice once the tournament begins? KVD did exactly that at Bull Shoals. And KVD is the most dominant bass angler in the world because he boldly anticipates with supreme confidence what the bass will bite two hours from now, far more than he gives a rip about what they bit two days ago.

â€œI looked for spawning bass in the backs of pockets during practice with spinning tackle, but when that wind blew on the first morning of the tournament, I totally scrapped all that and went power fishing with crankbaits, jerkbaits and spinnerbaits,â€ said VanDam. â€œWhen you’re fishing clear water reservoirs, and that wind blows, you fish the wind!â€ said VanDam. â€œYou don’t worry about where they were.â€

Hear that? â€œDon’t worry about where they were.â€ Change like the wind. Adapt or fail. VanDam, Iaconelli and Hackney are the very best in the world at doing just that. And each leaves Bull Shoals with a paycheck.

â€œSo if you’re tired of the same old story, oh, turn some pages. I will be here when you are ready – to roll with the changes.â€ â€“ REO Speedwagon