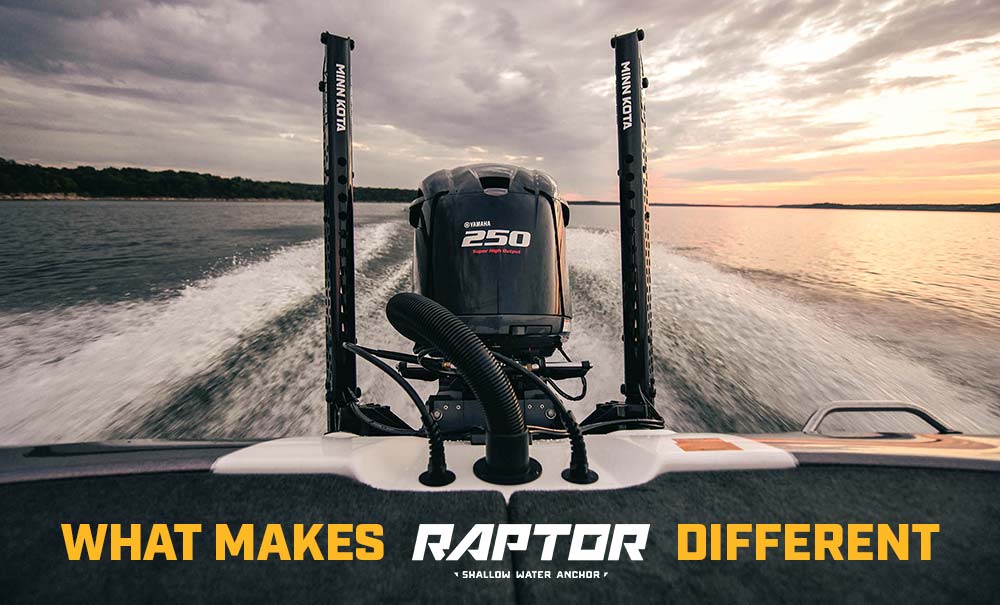 Mid 2020 marked the launch of the Minn Kota Raptor shallow water anchors worldwide, and in addition to the positive feedback – one question has continued to come up. “What makes Raptor different?”

Raptor is the next generation of shallow water anchors not only for Minn Kota but for anglers all across the country thanks to exclusive, patented features. The road to creating the surest holding anchor available on the market, however, begins over a decade ago with the launch of Talon shallow water anchors.

In 2011 the first Minn Kota Talon anchor was launched to the world, pioneering innovations like automatic up/ down and introducing the world to the first electromechanical shallow water anchor. 2014 marked another set of innovations that allowed for increased retraction force and a more compact three-stage telescoping design.

2018 saw the first time that Talon’s communications featured Bluetooth, which allowed for connectivity with a phone or tablet via the new mobile app, as well as Humminbird fish finders as part of the One-Boat Network®.

This was also the first year that the world saw transom-mounted shallow water anchors reaching 15 foot depths – the deepest on the market. 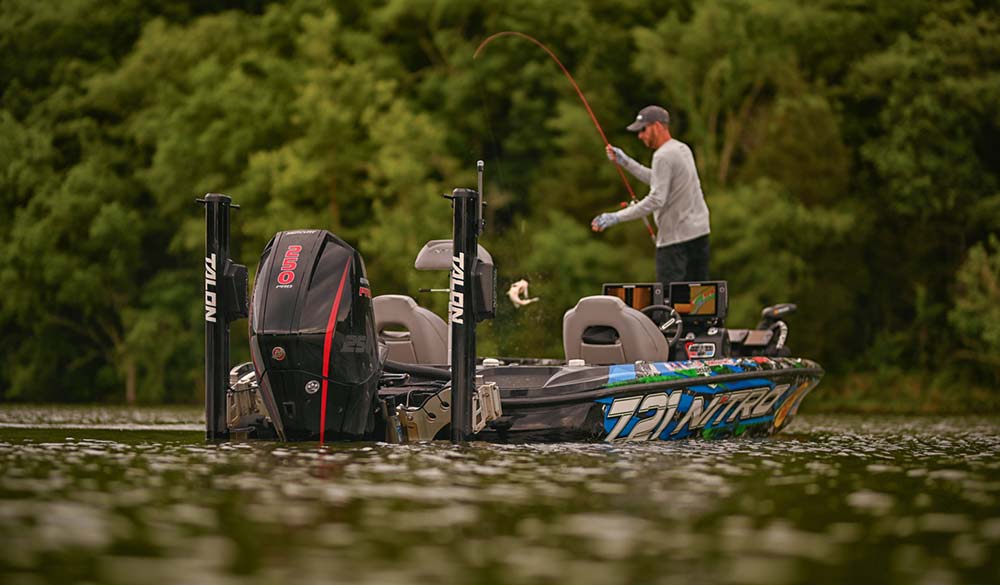 So, at the end of the day, what makes Raptor different than other shallow water anchors? It all starts with unique, patented anchoring features that secure boats in place unlike any other and its purposefully rugged design.

Up until this point all shallow water anchors on the market operated by monitoring an electrical current limit. Whether they deployed through electronic or hydraulic means they simply drove the anchoring spike until ground resistance met a certain threshold.

In heavy wind and current, the anchoring spike could become dislodged, and the anchor would have no means of sensing whether it was deployed, stowed, in the ground, or somewhere in between. In wind or current, anglers could find themselves drifting off their best fishing spots.

“But the only way to do it was by measuring hydraulic line pressure. We knew if we wanted to give anglers the best possible experience on the water our next anchor was going to be hydraulic.”

When Raptor was unveiled, so were two technologies that were made possible by a proprietary -and patented- pump design that makes Raptor the only anchor that can re-anchor itself.

Another unique technology is Auto-Bottom Mode, which senses bottom hardness to ensure the right amount of force is delivered for a more secure hold every time. Overdriving in silt can spook fish and disturb sediment, and under-driving in rocks and gravel will likely result in drifting from your spot.

With Auto-Bottom mode, Raptor can calculate in real-time how much pressure to apply based on bottom composition to prevent over-or under- driving the spike.

At any given moment, Raptor’s integrated pressure transducer knows the bottom composition that surrounds the spike and how much force is being applied. Active anchoring and Auto-Bottom mode allow Raptor to anchor more reliably than any anchor that came before it. 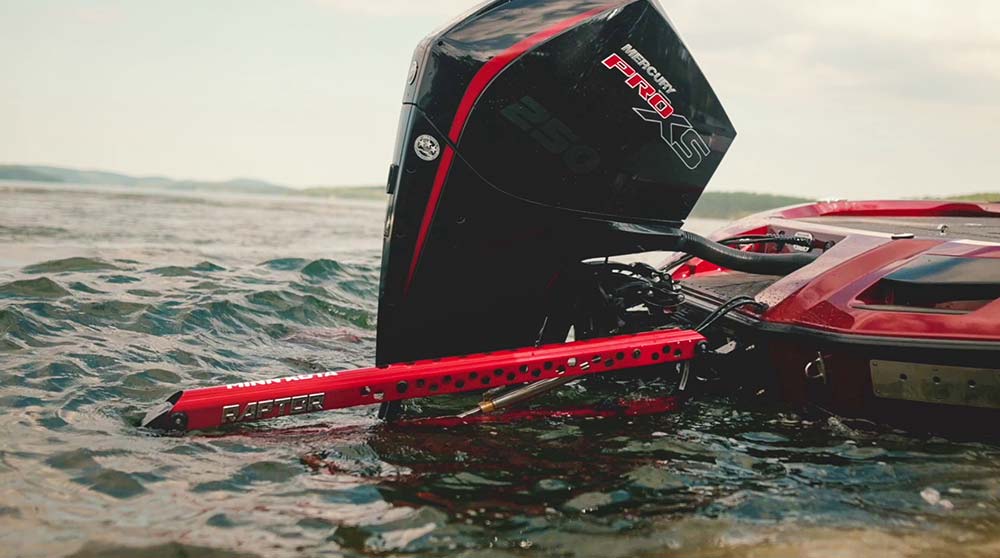 The idea of a hydraulic shallow water anchor isn’t necessarily new, but Raptor was designed from the ground up to ensure the entire anchor could hold up to the increased deployment and retraction force of the pump, and abuse from the most serious anglers and conditions on the water.

Its unique pump design keeps Raptor holding tightly when stowed, eliminating the need for special covers or bungee cords to keep your anchor secure while running or trailering. Integrated hydraulic check-valves tightly secure Raptor’s anchoring spike so there are no rattles or shakes – meaning no extra wear while driving to the lake.

Instead of weaker traditional bushings that can quickly deteriorate and require replacement, Raptor bushings are manufactured using PEEK (polyetheretherketone) – a polymer with mechanical strength and dimensional stability unlike anything else on the market.

All these small differences add up to create the most durable hydraulic anchor possible. With such a robust design you might expect Raptor to weigh more than other anchors, but 10-foot Raptors actually boast the lightest on-transom weight of any 10-foot shallow water anchor. 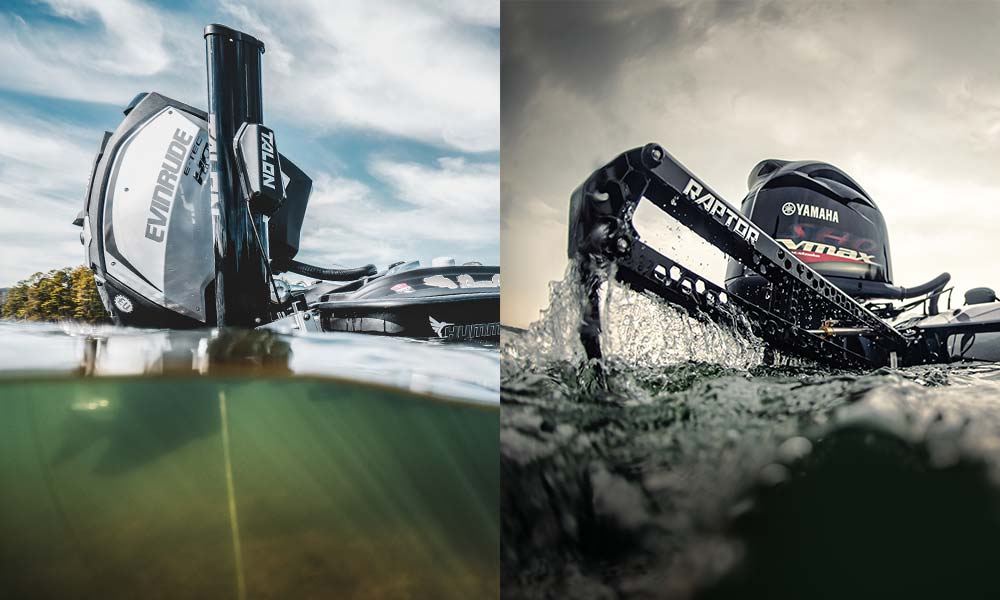 A Shallow Water Anchor for Every Angler and Boat

With all of the new features that come with Raptor new anchoring system, anglers might wonder what might be in store for the Talon line-up. Offering both electro-mechanical and hydraulic designs means that Minn Kota shallow water anchors can help anglers lockdown in more places than ever before.

Talon is still the only option that reaches depths up to 15 feet and boasts an integrated work light. Anyone rigging their boat with limited space for pumps will also appreciate Talon’s simple electrical connections that won’t take up valuable bilge area.

For nearly nine decades Minn Kota has established itself as a boat control leader by making the most dependable and smartest trolling motors on the water. Every product that leaves the Mankato Minnesota facility was made by people who obsess over every detail so that you can make the most out of every cast, make more connections and log more catches.

So if you hear someone ask “What makes Raptor different?”, the better question might be, “Is there anything about Raptor that is the same?”