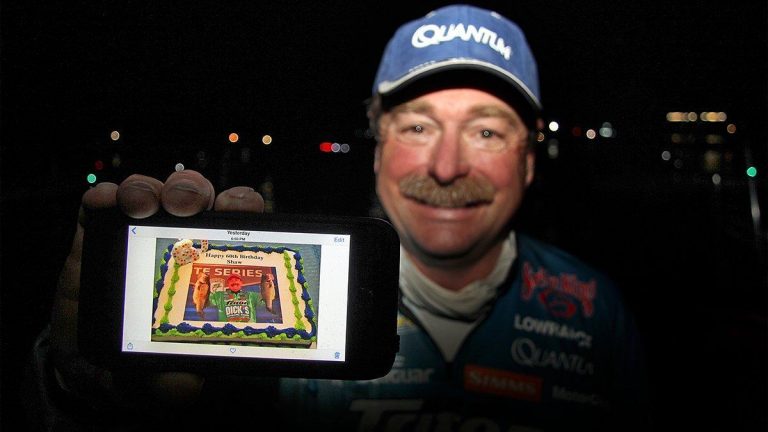 It was still very dark prior to morning launch at Toledo Bend’s Cypress Bend Park boat ramp, but Shaw Grigsby was shining his polarized sunglasses.

He was also showing off cell phone photos of the 60th birthday cake that friends Paul Elias, Don Barone and bass fishing legend Tommy Martin shared with him last night.

The great thing about Toledo Bend is that winning stringers can be caught from 3 to 30 feet deep, with just about any technique you favor most. For Shaw Grigsby, that’s sight fishing. And the day after his 60th birthday, he’s still one of the best in the world at it.

“My first stop of the day will be to try and catch a spawner and I’ll fish for bedding fish as far as it’ll carry me throughout the tournament,” Grigsby said. “The three best fish I spotted on beds in practice probably totaled 17 pounds and that may or may not be the kind of daily weight you need to make Sunday’s top 12 cut here.

“I’d love to stay shallow and look for ‘em for three days but more than likely I’ll have to move out deeper and pitch a heavy Texas rig around in the vegetation,” Grigsby said. “My daughter Amy and my favorite fishing buddy Bryce (grandson) called and sang ‘Happy Birthday’ which that was special. And so was that cake that Tommy Martin’s wife had made for me. I still can’t believe how clear my photo was on the cake. That was so cool!”

After 60 years, if we’re all as rich with enthusiasm as Shaw Grigsby, we should feel super fortunate.

“I heard somebody caught a 13-pounder here in practice so I’m pretty stoked this morning,” Grigsby said. “And when I get back to Florida, I’m going after giant tarpon with a fly rod; I can’t wait!”