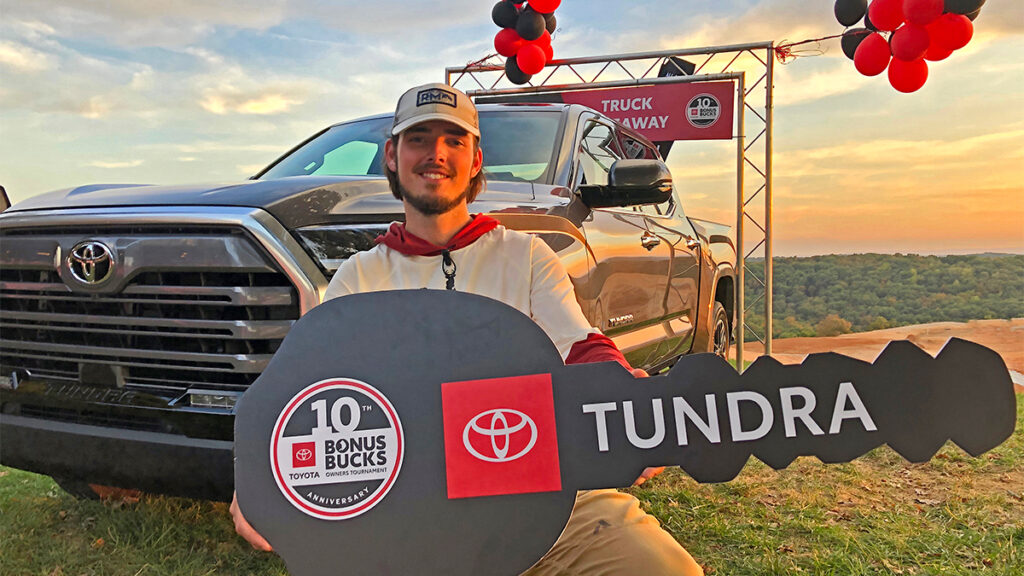 More than 400 amateur anglers filled their bellies with free BBQ, cobbler, and ice cream during the 10th Annual Bonus Bucks Owners event at the Bass Pro Shops Shooting Academy near Table Rock Lake when Toyota executive Mike Tripp and top pro Gerald Swindle reached into a hopper full of names to randomly draw the lucky winner of the all new redesigned 2022 Toyota Tundra.

“Cole Anderson!” said Tripp and Swindle over their microphones. To which no exuberant screams could be heard from the excited crowd of hundreds. “Cole Anderson, where are you? Is there a Cole Anderson here?” they repeated at least 15 times to no avail.

Finally, seconds before Tripp and Swindle began to reach back into the hopper for a different entry card, 23-year-old Cole Anderson came running in sport sandals from inside the Shooting Academy on to the back lawn to claim his life changing prize.

Turns out, he was inside the Shooting Academy talking about wild hog hunting and bass fishing with another guest angler and failed to hear his name being called outside the first several times.

“Oh my gosh! My face was already hurting from smiling because I’m having such a good time here tonight, and now it’s really hurting,” beamed a grateful Anderson, an electrician apprentice from nearby Bentonville, Arkansas.

October is proving to be the young Anderson’s lucky month in a rather mind-boggling way. Last October he won $100,000 at Lake of the Ozarks in a Big Bass Bash tournament, and in October 2018 he caught the biggest bass of his life, a 12-pounder.

And perhaps the only thing Anderson is more allegiant to than big and pricey KGB swimbaits is Toyota Trucks. “I just bought a Tacoma two months ago, I drove a 2005 Tundra in high school, my dad has a 4Runner, and my brother has a Tacoma too,” says Anderson proudly.

“I talked to my parents about what brand of truck to buy a few months ago before I bought my Tacoma, and really, it’s a no brainer, whether you drive a 4Runner, Tacoma, or Tundra, as far as my family is concerned, no other brand of trucks matches Toyota’s reliability and resale value,” he concludes.

Brand loyal, a passionate swimbait angler, and indeed a deserving winner of an all new 2022 Tundra. Tournament organizers are just grateful he finally came running to claim his prize.