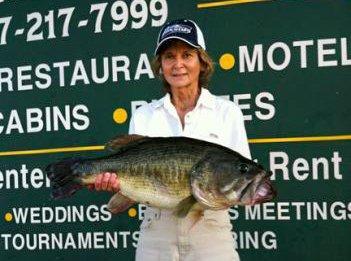 Judy Cagle and her husband Randy were practicing for a Fishers of Men tournament on Toledo Bend on Aug. 23. Her second cast on their fist stop proved to be their last of the evening. Cagle hooked the largest bass of her life, a 14.66-pound largemouth bass on a Stick ‘Um Senko from R1 Bass that she fished on a 7-foot medium-heavy power All-Star rod and Abu Garcia Revo Baitcaster. After a brief fight they landed the bass and weighed it on hand held scales at more than 14 pounds.

It was an amazing catch. The fish wasn’t doing well after being weighed on certified scales so they made every attempt to revive the fish, fizz it and keep it cool and oxygenated until it showed more signs of life. Despite the efforts of a lot of anglers and tournament staff,  the fish expired before it could be released.

For more on this great catch, read this article from Beaumont Enterprise.