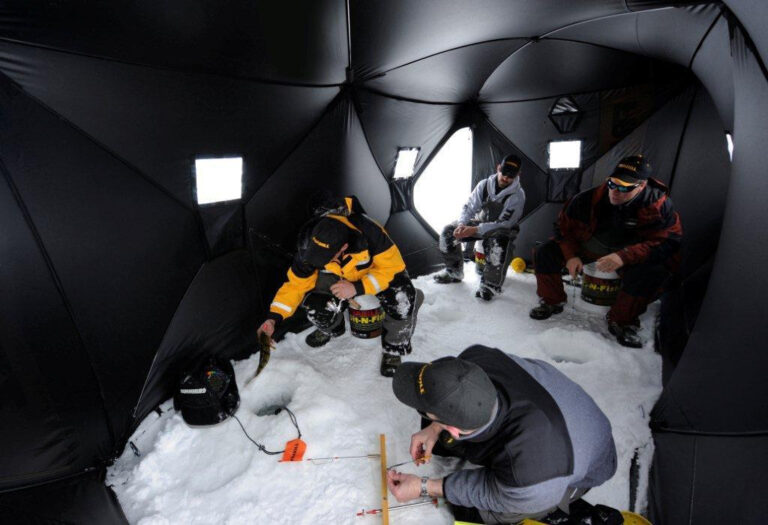 Most of the northern lakes are covered with ice. While some folks up north think about hockey this time of year, the die-hard anglers are getting excited about ice fishing. Wired2Fish pro Scott Glorvigen has been ice fishing in Minnesota for more than 40 years. To say he’s learned a lot about the sport is an understatement.

“Ice fishing can easily be started and doesn’t have to be about a lot of equipment,” Glorvigen said. “A guy can load up a tobaggon sled with a hand auger, bucket, a couple of rods and reels and a small box of ice jigs to get started. A pop up shelter is nice as well to block the wind and weather.”

For a few hundred bucks you can start a whole new sport of fishing. And really less than that if you just want to go one rod a bucket and brave the elements on your own with a hand auger and no shelter.

An auger is a necessary piece of equipment. For early ice and late season re-punching of holes, a hand auger is enough to get the job done. Keep in mind, a 6-inch diameter auger is easier to drill holes with than an 8-inch auger.

After you get the hole dug, you’ll want a scoop to get the slush and broke up ice out of the hole. Once your hole is cleared a bucket can be handy for holding your gear but also for keeping your rear off a block of ice and maintaining some degree of warmth. A rod and reel combo like the Frabill Arctic Fire Ice Rod Reel combo is a great starter combo for chasing bluegills, crappie and even larger game fish. There are combos under $20 and some even come with line.

Speaking of line, that’s the critical component that many overlook and overpower in ice fishing.

“Most of the time I’m fishing some sort of monofilament,” Glorvigen said. “I fish a colored line, something like the colored Sufix Ice Magic Monofilament, because I can see my line above the ice. A bigger factor, however, when the panfish are neutral or responding negatively to presentations is smaller diameter line. I recommend 2-pound test. I fish a lot of 1-pound test and I never go above 4-pound test.”

For panfish, which is one of the easiest species to start with, small ice jigs in 1/16 ounce to 1/32 ounce are the necessary baits for tempting fish under the hard water. The new plastics are all good offerings. Tipping jigs with spikes (maggots) or wax worms adds a little subtle action and natural forage to the presentation. Usually the new tiny plastics with a quivering tail work best because even when you’re dead sticking, it’s a subtle action that usually tempts ice fish.

Electronics like the Hook 2 5-inch Ice Machine can make reading the water a lot easier. Affordable ice fishing units can definitely enhance the fishing and give you an exact representation of the mood of the fish and when they are eyeballing your offerings. A hub type shelter like the Frabill Hub Shelter can keep you warm and make ice fishing a lot more comfortable as it keeps the elements off you while you fish. The shelter, however, collapses and stores easily on a sled or in the trunk of a car.

“Typically I’m fishing smaller bodies of water,” Glorvigen said. “And these small bodies will produce better panfish ice fishing for most because they’re easier to locate the prime areas just because there is not as much water to scout. The dishpan-shaped fisheries are some of the best. Basically I just look for a basin area with a deeper hole in it. Like a small area that is 18-foot deep surrounded by 12-foot deep water.”

Panfish will congregate in the deep holes under ice because, contrary to other times of the year, the warmest water is the furthest from the ice which is directly on the bottom of the lake. Because of that, Glorvigen seeks out the deeper holes, and then lowers his bait from just a few inches off to 18 inches off the bottom.

“You won’t have those big migrational movements like you have in open water,” Glorvigen said. “Wind, current and cold fronts don’t affect the fish under ice. The place I fished this last weekend, I’ve fished for 40 years. And they are there every year, just like clock work. It’s some of the easiest fishing of the year, once you find them the first time.”

If Glorvigen doesn’t find the panfish in those deep holes immediately, he’ll move to the first grassline adjacent to the deep water or the last grassline heading out into the basin. It will usually be near the first primary break, sometimes as shallow as 6-9 feet of water on the smaller lakes.

Once you’ve got your spots located, your holes drilled, your slush scooped, it’s time to do the work. Glorvigen likes a two-rod approach where local game and fish laws allow. He’ll lower one rod and bait offering down to the bottom and reel the handle a few turns to get the bait just off the bottom. That will be his dead stick rod. The other rod he’ll lower his bait into the hole and with an underhand grip, he’ll hold the rod sideways so he can detect very subtle bites. It’s easier sometimes to discern if a fish has slightly moved a bait with the rod sideways. The upswing is quicker with the under hand grip as well. So the millisecond you notice a faint movement of the rod tip,  you can swing the rod up and start reeling.

As for action, he’ll keep his movements subtle and short. Sometimes just trying to hold the rod still can impart a very subtle action on the bait with your natural shake. Glorvigen likes to sit on a bucket or chair and rest his arm on his leg to relieve fatigue and keep the rod still when he wants a dead stick presentation.

On a recent outing, Glorvigen was panfishing and tempted a very large northern into biting. The fish fought for 45 minutes before finally relenting and giving up the fight. That fish was landed on 2-pound line. Back reeling, good even smooth drag, and knowing when to reel are keys to landing fish on light tackle.

As fish surge, let them run and the drag spin or back reel to wear the fish down. As the surge stops, see if you can gain some ground. Usually a big fish like his pike will have several good runs before tiring. Panfish won’t take nearly the strategy to land, but it’s good to be prepared for anything when ice fishing. 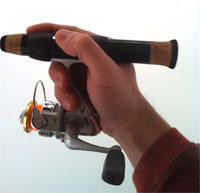 Being a southerner, the first thing that comes to mind is safety on the ice. To walk on ice, 3-4 inches is where most people will start; Glorvigen prefers 4 inches or more. If you’re going to go with a group of people or maybe a snowmobile, 6-10 inches is the common rule. Light vehicles start around 15-18 inches. Glorvigen again prefers more ice to be totally safe as some ares might not be the same thickness.

The Minnesota DNR website has a great take on Ice Safety that all ice anglers should visit before taking a trip to the water.

Ice fishing can be a great way to load the freezer with tasty panfish or other species as well as fine tune your finesse skills and light bite detection abilities. Employing sound location, presentation and seasonal philosophies to your fishing will pull more fish out of the hole.