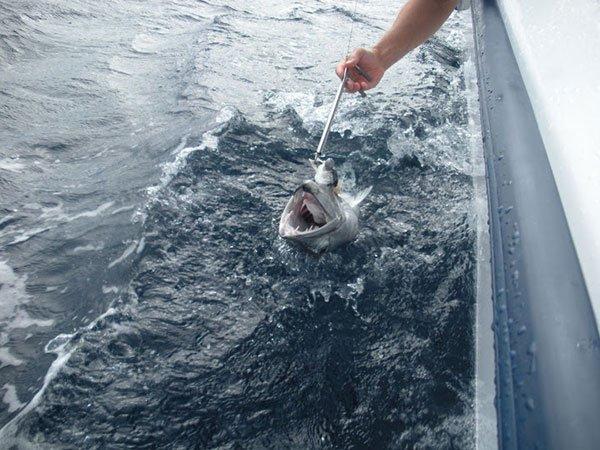 This was one of the things Mac caught the last time he went, he somehow forgot to show it to me until AFTER I agreed to come on the trip and had booked the non-refundable airfare…

His grandfather, took to the sea.

His father, took to the sea.

He, took to the sea.

And now, he is taking me.

My fishing doppelgÃ¤nger (who looks nothing like me), butt replacement doc and good friend, Mac.

You can meet him here.

In a few short days, Dr. Mac, his friend, ex-cop Bruce and myself will board an airplane in Hartford, Conn. and take off to the sea that laps the beaches of Fajardo, Puerto Rico.

Our guide, Marcos, is a fish biologist from South America.

Dr. Mac has done this before â€¦ this is what he caught on his last trip:

He caught those in 3 daysâ€”this time he wants to better that catch.

“I’ve timed it to the right lunar cycles and water column temps. The best time of the year for a multiple species trip is between May and September when the summertime bait is well organized.”

Mac has told me this could be the fishing adventure of a lifetime, and it may well be that for Mac and Bruce.

For me, though, I look at it as a storytelling adventure of a lifetime.

A chance to pay homage, to when sports writers wrote not so much of the “how”, the nuts and bolts, but of the “why”, the romance of the adventure, the reason why, you are there.

Dr. Mac is technically known as Lt. Col. Robert McAllister, he has been awarded the Bronze Star as well as the Combat Medic Award. His last deployment saw him as the Commander of the 947th Forward Surgical Team in Afghanistan.

But before his Army career, he was in the Navy. As was his father, as was his grandfather. This morning, I texted him one question.

His response was exactly this: “Yes.”

But most importantly, it will be about the “yes.”

We, you and me, live on a planet of water. Without water, without the seas, we wouldn’t be here. Mother Earth is really Momma Sea.

It is the human spirit that lead us to push off the beach, and sail the seas.

And to me, the real story lies between the footprints in the sand,

and the waves that erase them.

The romance of the adventure of the sea,

to step off the shore.

Watch for the 5-part series to be exclusively on Wired2Fish in the next couple of weeks â€¦ wish us luck.