Article and photos by Shaye Baker

Many people prefer a little variety in their life, from a simple change of scenery to break from the normal routine. Fishermen are no different. Smallmouth fishermen trudge down south to visit Okeechobee and Falcon, largemouth anglers trek northward to chase big smallies on St. Clair and Erie. Anglers visit the likes of Lake Lanier and the Coosa River to test their might against stout spotted bass. Variety, as they say, is the spice of life.

If you’re one of the many who enjoy sampling various species of bass, the Flint River in southwest Georgia fits this bill. In these beautiful waters, you’ll find the ferocious shoal bassâ€”a species of black bass only native to Georgia, Alabama and Florida. Though they are found in all three states, few areas are as jam-packed with quality shoal bass as the section of the Flint River just above Lake Seminole.

Elite Series pro J Todd Tucker lives just a short drive away from the Flint River in Moultrie, Ga. Tucker has fished these waters for decades and caught numerous shoal bass weighing more than 4-pounds, with his best weighing more than 6-pounds.  Although he is fortunate enough to fish all over the country, he’ll be the first to admit that there’s nothing quite like the shoal bass that inhabit the Flint River.

“If I only had one place to fish, I could fish the Flint for the rest of my life,” said Tucker.

It’s evident he means it too, as he and his dad have purchased a tunnel hull boat specifically for fishing  their home waters. Although a stretch of the Flint can be accessed from Lake Seminole in a fiberglass boat, a tunnel hull or jet-boat is necessary to access the prime shoal bass areas. If a specialized boat is not in your budget, there are numerous boat ramps along the river that give anglers the ability to float, kayak, or canoe their way to local honey holes. 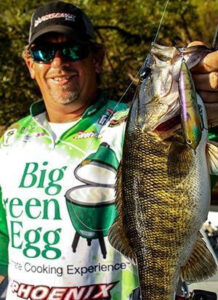 Fishing for shoal bass in the Flint is fairly simple in the fall. Most days, Tucker just needs a topwater that makes a lot of noise.

“They’ll hit other stuff,” he said. “But I know the big ones will crush a topwater, so that’s about all I’ll fish.”

Any topwater will draw big blow-ups as long as it possesses two basic characteristics. It needs to make a lot of noise and be the right color. Prop baits, wake baits, poppers and walking-style topwaters are all on the menu anytime Tucker  hits the water. Tucker emphasizes the importance of “matching the hatch” when fishing the Flint, and the bass were specifically targeting bream during a recent trip.

Because bream are the primary forage along the Flint River and shoal bass are primarily sight-feeders, each  of Tucker’s go-to baits are some sort of bream or bluegill pattern.  While the racket of a loud topwater bait will initially pique the bass’ interest, the look of the bait seals the deal.

It is a good idea to have a follow-up bait on deck as the fish will sometimes swat at a topwater and miss it. To catch the short-strikers, Tucker relies on a Berkley Havoc Rocket Craw . When a fish misses his topwater plug, he’ll pitch the Rocket Craw on a light Texas Rig towards the bass.. Although it doesn’t work every time, the soft plastic will often make up for a lot of the misses.

The Flint is composed primarily of rock with intermittent shoals and deeper pools dispersed throughout. While the many large boulders in the river can make navigating the Flint tricky, Tucker believes them to be beneficial to the fishing. 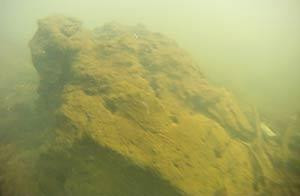 “The isolated boulders are the deal,” said Tucker. “That’s where the big ones like to hang out.”

To have a shot at catching one of the huge shoal bass for which the Flint is known, keep your eyes peeled for the larger rocks out in the middle. Big 4-pound-plus shoal bass like to position in the current breaks created by these rocks. They are opportunistic feeders, and they will use the eddies as ambush points for their prey.

Although the bigger bites typically come from the lone rangers around boulders, a lot of numbers can be caught in close proximity to the shoals. To target these smaller shoal bass, focus on the areas just above and below the shoals. The topwaters are a little tough to work in the swift, choppy water, so  subsurface baits such as spinnerbaits or swimbaits are a better option in these areas.

Fishing the Flint involves more than just going down the bank like you might on a calm-water reservoir. Tucker drifts a lot of the time using the trolling motor only to guide the boat as it washes backwards down-river. It’s best to use the current to your advantage instead of trying to fight it all day.

The Flint River has a lot of regular current, allowing anglers to revisit a lot of water. If you fish through an area, make a mental note of where key features are, such as current breaks and submerged rocks. Whether you catch fish or not, the area will replenish as more fish wash in-and-out with the current. Recycling water is a lot more productive with so much current.

The simplicity of fishing draws anglers to the Flint River. As long as you keep a look out for the right signs and present the right baits, you can have a lot of fun doing something that is fairly unique. The Flint doesn’t really get the pressure that many of the lakes and larger rivers do these days, so anglers are provided with a simpler way of fishing, and one I recommend you try out.